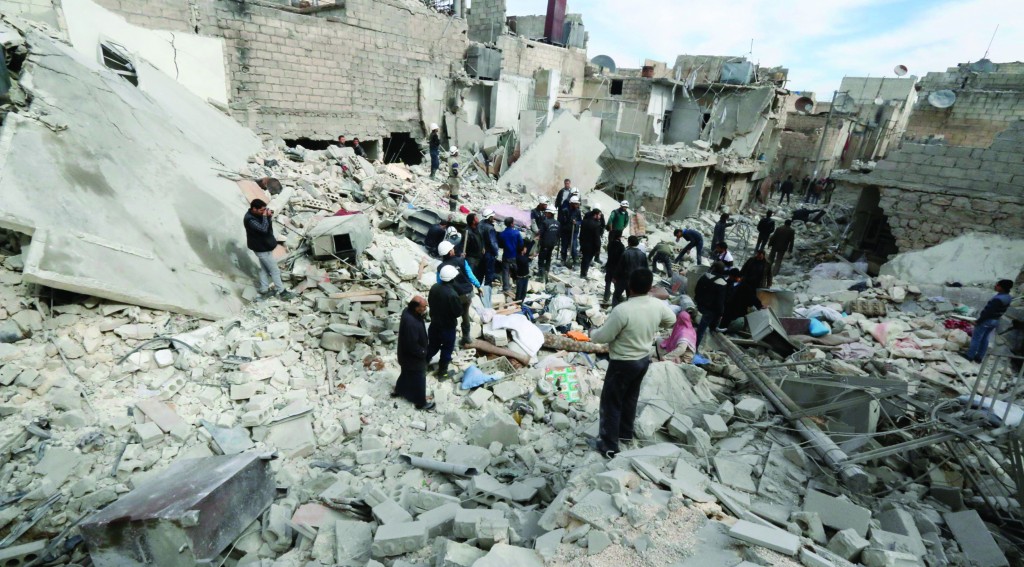 Syrian government helicopters and warplanes unleashed a wave of airstrikes on more than a dozen opposition-held neighborhoods in the northern city of Aleppo on Sunday, firing missiles and dropping crude barrel bombs in a ferocious attack that killed at least 36 people, including 17 children, activists said.

Aleppo has been a key battleground in Syria’s civil war since rebels swept into the city in mid-2012 and wrested most of the eastern and southern neighborhoods from the government. Since then, the fighting has settled into a bloody grind, with neither side capable of mounting an offensive that would expel its opponents from the city.

But over the past two months, President Bashar Assad’s air force has ramped up its aerial campaign on rebel-held areas of Aleppo, pounding them with barrel bombs — containers packed with explosives, fuel and scraps of metal — that cause massive damage on impact.

The Britain-based Syrian Observatory for Human Rights monitoring group said the Tariq al-Bab district on the eastern edge of the city was the hardest-hit, with at least eight barrel bombs raining down on it Sunday. Marea said one of the air raids in the neighborhood struck a vegetable market and another landed near a mosque.

The Observatory put the day’s death toll in the air raids at 36, including 17 children. Marea said that more than 50 people were killed in the airstrikes, although he did not have an exact count.

An amateur video posted online showed a helicopter circling in the blue sky, and then a barrel plummeting from the aircraft until it slams into buildings on the horizon, sending a pillar of smoke and dust into the air. The video appeared genuine and corresponded to other Associated Press reporting of the events depicted.

This is not the first time that Assad’s air force has waged an intense campaign over Aleppo. In December, military helicopters pounded rebel-held districts of the city with barrel bombs, leveling buildings, burying people under the rubble and killing more than 500 people over a two-week stretch.

The misery in Aleppo was then compounded in early January by an outburst of rebel-on-rebel fighting, which has weakened the opposition’s grip on parts of the city.

Over the past two weeks, Assad’s forces have slowly chipped away at the rebels’ hold on neighborhoods in southeastern Aleppo. While the advances have been small, they still mark the most significant government gains in the divided city since opposition fighters seized the areas in mid-2012.

As intense as the airstrikes have been, the rebels’ position in the city and across northern Syria has been undermined to a greater degree by the bloody bout of infighting that pits the al-Qaida-linked Islamic State of Iraq and the Levant against an array of ultraconservative brigades and more moderate factions.

The rebel clashes have killed more than 1,400 people since they began a month ago, and the fighting shows little sign of coming to an immediate close.