General Stock Investors Hit From All Sides in January 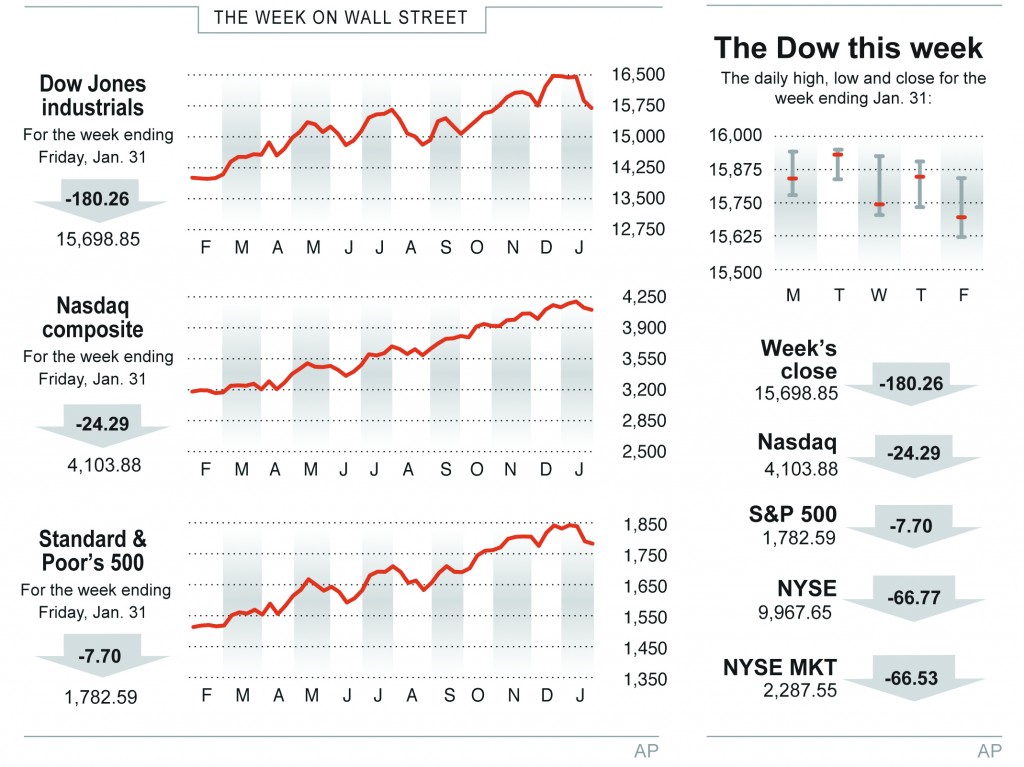 Stock investors were hit from all sides in January.

Concerns about the global economy and U.S. company earnings, as well as turmoil in emerging markets, led the Dow Jones industrial average to its worst start since 2009. However, many investors remain hopeful that the problems will not spill over into the rest of 2014.

They even see the downturn as healthy, given the U.S. market’s rapid rise last year.

The Dow slid 5.3 percent in January while the Standard & Poor’s 500 index fell 3.6 percent and the Nasdaq composite declined 1.7 percent.

Investors entered the year with some degree of skepticism and nervousness. The stock market went basically straight up in 2013. The S&P 500 index ended 2013 with a gain of nearly 30 percent, its best year since 1997.

But no stock market can go straight up forever.

Many investors expected 2014 to be a more muddled and volatile year for the market. Market strategists late last year were looking for the S&P 500 index to notch a modest gain of 4 percent to 6 percent, ending in the range of 1,850 to 1,900.

Investors were also looking for more pullbacks this year and possibly a correction, the technical term for when a stock market index like the S&P 500 falls 10 percent or more. Three months ago, analysts at Goldman Sachs said there was roughly a 60 percent chance that a correction would happen this year.

But many investors were surprised by January’s turbulence. With one exception, the Dow had triple-digit moves every trading day in January.

Still, with the broader S&P 500 index down just 3.6 percent from its January 15 peak, the downturn is hardly severe.

Investors point to the December jobs report, released on Jan. 10, as the event that started the troubles. The U.S. government said employers created only 74,000 jobs in December, the worst month for job creation in since 2011 and far below expectations.

Up until then, weeks of data showed the U.S. economic recovery was accelerating. U.S. companies were selling record levels of goods overseas; layoffs had dwindled; and the Federal Reserve was pulling back on its economic stimulus program, citing an improving economy.

Many investors called the December jobs report as a statistical fluke. But the report has weighed on stocks all month, investors say.

Other economic reports also painted a picture of U.S. economic growth possibly flattening out instead of accelerating.

Wall Street is in the middle of earnings season, when the country’s major corporations report results for the final three months of the year. Half of the members of the S&P 500 have reported, and the results have been mixed. While fourth-quarter corporate earnings are up a respectable 7.9 percent from a year earlier, companies have been cutting their full-year outlooks and reporting weaker sales, according to data provider FactSet.

Wal-Mart, the nation’s largest retailer, said Friday that earnings may come in at the low end or below its prior forecasts. It also expects sales at stores open at least a year to be flat. The company previously forecast that sales would be modestly higher.

Wal-Mart’s forecast echo the comments from Macy’s, Target, Best Buy and other retailers.

Of the companies who have reported so far, 44 companies have cut their full-year profit outlooks while 10 have increased their outlooks, according to data from FactSet.

Adding to concerns about the U.S. economy and earnings were problems in overseas markets.

The bad news started with China. A recent report showed manufacturing activity in the world’s second-largest economy unexpectedly contracted in January. The report added to other recent signs that the Chinese economy was slowing down after years of massive growth.

All three saw their currencies fall sharply against the dollar, as investors began to pull out of emerging markets and return their money to less-risky parts of the globe.

They will get the January jobs report next week. Also, another 93 members of the S&P 500 are scheduled to report earnings.