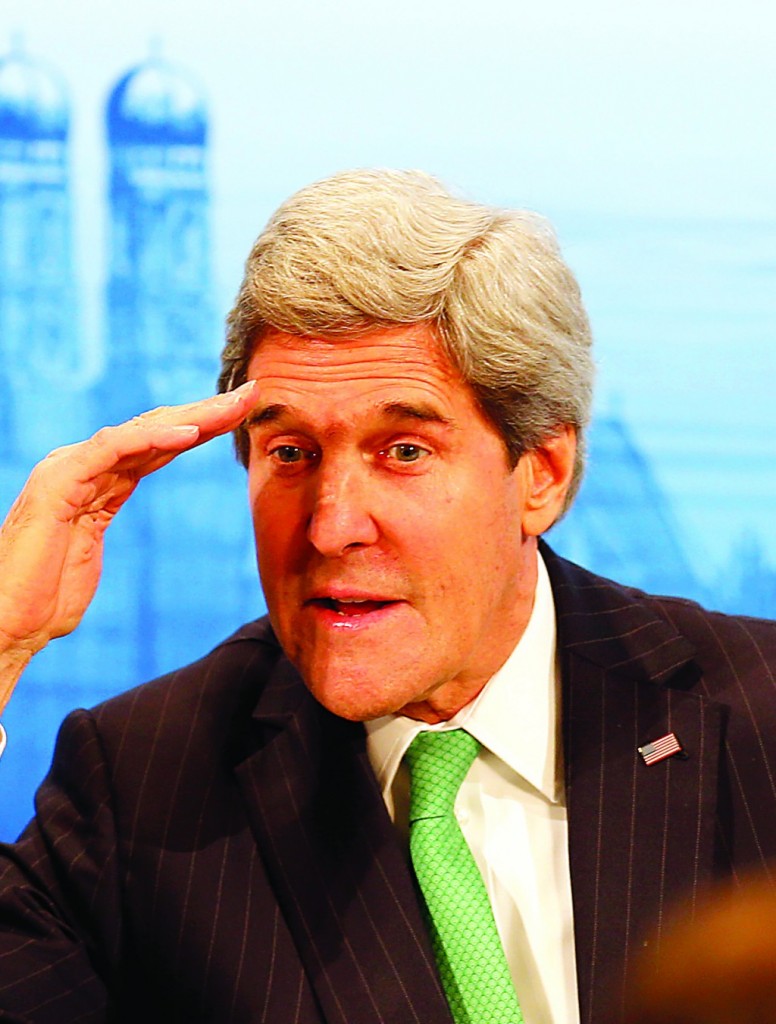 The U.S. State Department spokesperson sought to clarify remarks made by Secretary of State John Kerry and Israeli leaders on Sunday after a comments about Israel’s vulnerability to an international boycott if peace talks fail provoked a furious reaction.

“Today’s status quo, absolutely to a certainty, I promise you 100 percent, cannot be maintained,” Kerry said of the Israeli-Palestinian conflict. “It is not sustainable. It is illusionary. You see for Israel there is an increasing de-legitimization campaign that has been building up. People are very sensitive to it, there is talk of boycott and other kinds of things. Are we all going to be better withall of that?”

Israeli leaders took it as part of Kerry’s ongoing campaign to coerce Israel into making concessions to the Palestinians for the sake of a peace agreement that will weaken national security without resolving the conflict. Kerry made similar remarks last November.

But State Department spokeswoman Jen Psaki maintained that Kerry’s reference to a boycott was a description of actions undertaken by others that he has always opposed.

“Secretary Kerry has a proud record of over three decades of steadfast support for Israel’s security and well-being, including staunch opposition to boycotts,” she said in a statement.

Psaki then implied that the Israelis were distorting Kerry’s statements. “Secretary Kerry has always expected opposition and difficult moments in the process, but he also expects all parties to accurately portray his record and statements.”

Strategic Affairs Minister Yuval Steinitz was perhaps the bluntest in his reaction.

“The things … Kerry said are hurtful, they are unfair and they are intolerable,” Steinitz told reporters. “Israel cannot be expected to negotiate with a gun to its head when we are discussing the matters which are most critical to our national interests.”

“Attempts to impose a boycott on the State of Israel are immoral and unjust. Moreover, they will not achieve their goal,” he said at the opening of his weekly Cabinet meeting on Sunday. International pressure on Israel would backfire and only cause the Palestinians to harden their positions, he explained.

“We expect our friends around the world to stand beside us, against anti-Semitic boycott efforts targeting Israel, and not for them to be their amplifier,” said Bennett in response to Kerry’s remarks.

Israeli chief peace negotiator Tzipi Livni defended Kerry as merely describing the bad things that could happen if the peace talks fail. Reuters quoted her calling the talks “the wall stopping a wave” of economic boycotts, cautioning that Israel could face the sort of isolation imposed on South Africa during years of apartheid.

Kerry also alluded to disparaging remarks about his “obsessive” or “messianic” quest for a peace agreement made by Defense Minister Moshe Yaalon last month, for which the latter was forced to apologize.

“I’m a little surprised at some of the articles that tend to write about an obsession or fanatical effort to try to achieve this,” he said. “We are just working hard, because the consequences of failure are unacceptable.”

Kerry made the remarks in an address to the 50th annual Security Conference in Munich, Germany over the weekend.

Yaalon, who was also at Munich, downplayed the consequences of a diplomatic impasse or a boycott.

While Israel appreciated Kerry’s efforts, if things didn’t work out, Israel would survive. “I hope we can achieve our goals in this agreement, but if we cannot, Israel will manage,” Yaalon assured the conference.

“I support the negotiations and encourage the political involvement” of Kerry and others, said Yaalon. “But we have to tell the truth and not fool ourselves regarding PA chief Mahmoud Abbas’s intentions. Will he be prepared to recognize Israel as a Jewish state? He has given us a clear answer, and it is no,” the Defense Minister said.

The heart of the matter, Yaalon told the audience, was not “the liberated or occupied or conquered territories of 1967. This conflict began long before the dawn of Zionism. I do not sense that the Palestinian leadership will be ready to agree to a partition of the land and drop all further claims.

Meanwhile, on Sunday the Palestinians joined in pummelling the Secretary, accusing him of recently threatening Palestinian Authority President Mahmoud Abbas that he would meet the same fate as his predecessor, Yasser Arafat, if he turned down Washington’s proposals for peace with Israel, a Palestinian source was quoted as saying.