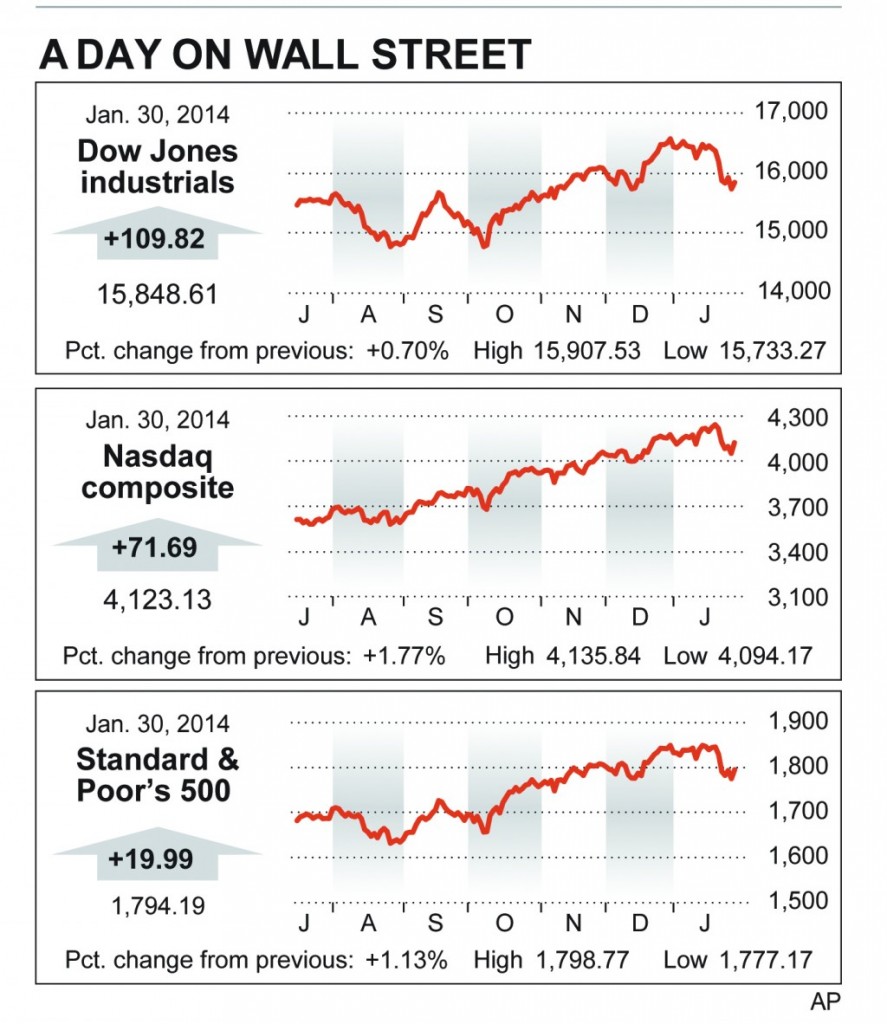 It was a stock market reversal.

Stocks rose sharply Thursday, with large parts of the market erasing Wednesday’s losses, as investors cheered a batch of strong earnings and data that showed the U.S. economy grew at a robust annual rate of 3.2 percent in the fourth quarter.

Investors also got a welcome respite from the recent turmoil in overseas markets, particularly in Turkey and Argentina.

It wasn’t all good news out of the technology sector. Amazon.com sank in after-hours trading after releasing results that fell short of what investors were expecting. The stock of the online retailing pioneer dropped $35.47, or 9 percent, to $367.54.

In other earnings news, Visa rose $3.76, or 2 percent, to $220.88 after the company reported a 9percent rise in first-quarter profits, beating expectations.

Alexion Pharmaceuticals was the biggest advancer in the S&P 500, rising $28.27, or 21 percent, to $162 after the company also beat analysts’ expectations and gave a strong 2014 outlook. Alexion is a specialized drug maker focused on rare genetic diseases.

Alexion helped lift the stocks of other drugmakers. Dow members Merck and Pfizer each rose more than 2 percent. Specialized drugmakers Gilead Sciences and Biogen were up 2 percent and 4 percent, respectively.

Investors also cheered news that U.S. economy grew at a 3.2percent annual rate in the final three months of 2013, a positive sign for the economy in 2014. Consumer spending, a major driver of the U.S. economy, picked up in the quarter.

Even with Thursday’s gain, it’s been a difficult month for investors. The Dow is down 4.4percent in January, the worst start to a year since 2009.

Emerging markets worries drove most of the sell-off over the last two weeks. A survey last week confirmed that manufacturing in China, the world’s second-biggest economy, slowed in January. And this week, the Turkish lira hit record lows, partly because a police bribery scandal there might destabilize the Turkish government.

In Argentina, the peso had its sharpest slide in 12 years earlier this month.

“The currency problems in the emerging markets caught a lot of people by surprise, and that overflowed in to U.S. markets,” Lynch said.

Investors got a break from the troubles in emerging markets Thursday. The Turkish lira, Argentinian peso and the South African rand, another troubled currency, stabilized.

Even with Thursday’s upturn, the broader trend in the market appears to be downward for the time being, strategists say. The Dow has risen only two out of the last eight trading days.

“I’m pretty focused on corporate earnings, and that’s about it,” said Ian Winer, director of trading at Wedbush Securities. “Earnings have been OK, but not all that great. I think we’re going lower, and I think (the sell-off this month) is just the beginning.”

Several investors have said the U.S. stock market will experience a “correction,” meaning a decline of 10 percent or more in a benchmark index like the S&P 500, sometime this year. That chorus has gotten louder in the last couple of weeks. The last time the market had a correction was in October 2011.

“The markets have been looking for a reason to pull back and certainly the emerging markets and currency problems gave them a reason to do so,” Lynch said.

The bond market also had a day of stability. The yield on the U.S. 10-year Treasury note edged up to 2.70 percent from 2.68 percent the day before.