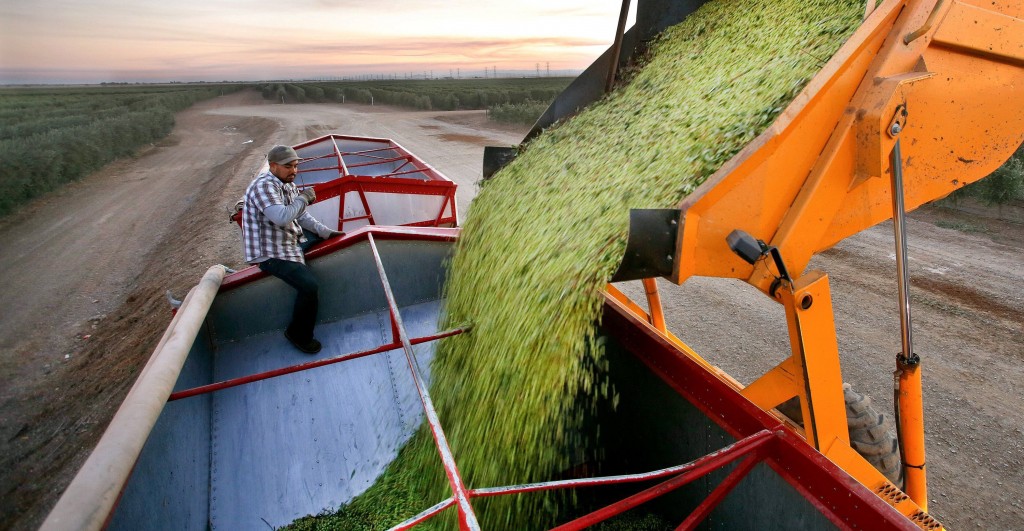 Nestled in a corner of the Sacramento Valley known for its rice, almonds and walnuts, densely packed rows of manicured olive trees stretch toward the horizon.

This 1,700-acre spread is the domain of California Olive Ranch, an upstart company with big ambitions.

The U.S. is the world’s No. 3 consumer of olive oil, drizzling 293,000 metric tons of the stuff over salads and pizzas last year. Yet almost every drop was produced overseas, in countries including Spain, Italy and Greece. Unable to compete with heavily subsidized foreign competitors, U.S. producers have focused on pricey artisanal oils.

The California Olive Ranch is changing that.

In just a few years, the Chico, Calif., firm has become the largest U.S. producer, dominating the market for domestic extra virgin olive oil. Its square green bottles can be found in retailers as diverse as Wal-Mart and Whole Foods. It’s also supplying big restaurant chains, including California Pizza Kitchen.

And far from being deferential to its European elders, the company has come out swinging. It has publicly disparaged the quality of some foreign brands and is pressing the federal government for import restrictions.

“They have shaken up the industry,” said Curtis Cord, publisher of Olive Oil Times, a trade publication. “The Europeans have had the run of the place for a long time.”

But this made-in-USA story has a twist. The chief owners of California Olive Ranch aren’t Golden State farmers, but a group of wealthy Spaniards.

They include members of the Sumarroca family, a clan of Catalan industrialists who are banking on the New World to expand their agricultural empire. 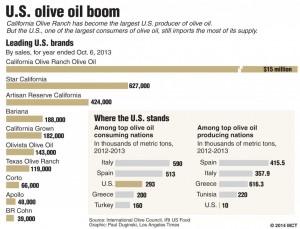 Their group has invested millions, buying 4,000 acres of California farmland and contracting with more than 60 local olive growers. And it has built a state-of-the-art milling facility in its flagship ranch in Artois, 90 miles north of Sacramento, with the expectation that the U.S. is primed for an olive oil revolution.

Speaking from Barcelona, Carles Sumarroca, chairman of a massive plant nursery operation called Agromillora, said he thinks California can do for olives what it did for wine grapes.

“The U.S., for many , was basically an importer of wine, and then decades ago the wine industry in California started to grow. … We think that with olive oil, something similar can happen,” Sumarroca said. “Besides, the climate and soil conditions for growing olive trees in California are excellent.”

California isn’t the only place Sumarroca is putting down roots. Agromillora, which has set up an olive tree nursery in Gridley, Calif., has similar operations in Australia, Chile and Turkey – nations with Mediterranean climates, where olives thrive. It’s all part of an effort to feed surging demand for olive oil, a $5.4-billion global trade.

But nowhere is that potentially more fruitful than in the U.S., where olive oil consumption has more than tripled over the last two decades. Domestic olive oil makers have increased production tenfold since 2007, to 10,000 metric tons. Demand is particularly strong for so-called extra virgin olive oil. The highest grade, it is 100 percent pure olive oil, made by pressing or crushing olives; it is low in acidity and contains no chemicals or additives.

California Olive Ranch is at the forefront of the U.S. increase. The company is using a technique known as Super High Density farming, or SHD, that calls for planting as many as 675 trees per acre, compared with 125 per acre in conventional olive farming. Trees are planted close together,  and then their branches are pruned and trellised, to form a single dense hedge. That allows growers to use rolling machines, called over-the-row harvesters, to move down the hedgerows, shaking the fruit off trees.

The process is cheaper, faste,r and yields more oil per acre than using teams of farmworkers or conventional harvesting machines. And it ensures better quality, because olives reach the mills before they start to spoil, according to California Olive Ranch President and CEO Gregg Kelley.

A former technology executive who joined the company in 2006, Kelley can appear exasperated when he speaks about Old World methods.

“Vast amounts of olive oil from Spain and Italy are low quality, because they have difficulty getting the fruit off the trees,” he said. He likens many of the popular imported brands to “glorified vegetable oil.”

Kelley said he can deliver better-quality extra virgin oil at a competitive price.

A 500-milliliter bottle of California Olive Ranch sold for $7.58 recently, at a Wal-Mart in Rosemead, Calif., a slight premium on popular imported extra virgin olive oil brands such as Bertolli ($6.74) and Carapelli ($7.24).

Experts say California Olive Ranch’s olive oil packs more bite than those brands, because of its freshness. and provides good value for the money.

California Olive Ranch isn’t “trying to make the best olive oil in the world,” said Nicholas Coleman, chief oleologist at Eataly, a gourmet food emporium in New York City. “What they’re trying to do is make high-quality extra virgin olive oil that can compete, at the same price points, as some of the big guns you see in the supermarket, like Colavita, De Cecco, Goya, Filippo Berio and Bertolli.”

During the recent harvest at the company’s Artois ranch, burly machines rumbled through the rows of olive plants. A phalanx of flexible plastic rods shook the tree branches, until they spilled green and purple orbs onto a conveyor belt, which dumped the fruit into a storage vehicle. called a gondola, alongside.

The olives were then whisked to a mill at the center of the farm, where they were quickly crushed to extract the luminous green juice, then bottled. Olives can go from branch to bottle in as little as two hours.

“It’s not like wine. It doesn’t get better with age,” he said.

Quality has surfaced as a major challenge for the industry in recent years, with some producers taking shortcuts to make a buck. Author Tom Mueller detailed widespread cheating in the gourmet business in his 2011 book, “Extra Virginity: The Sublime and Scandalous World of Olive Oil.” European oils purporting to be extra virgin were cut with cheap vegetables oils or coloring, to mask their inferiority.

As recently as October, the European Parliament’s committee on health and food safety issued a draft report deeming olive oil at the greatest risk for food fraud, ahead of fish and organic foods.

Olive oil importers in the U.S. say the negative publicity has unfairly tarnished their brands.

“I think there’s been this broad stroke to basically vilify imports, as if we’re all swimming in a sea of garbage,” said John Sessler, a New York-based importer.

Complicating matters is the dearth of regulation. Any olive oil can be labeled extra virgin in the U.S., regardless of its quality.

The U.S. Department of Agriculture began issuing voluntary extra virgin certification in 2010. Since then, California Olive Ranch has been behind almost every effort to bolster the domestic industry and ratchet up the pressure on imports.

The company footed half the $250,000 cost of two University of California-Davis studies showing that most foreign olive oil brands tested from select Californian grocery stores were falsely labeled extra virgin.

The studies rankled the import community and rippled to Europe. The Madrid-based International Olive Council, a nonprofit organization whose members account for more than 98 percent of the world’s olive oil producers (but not the U.S.), issued a statement saying the reports had the “evident undercurrent of aggressive, inexplicable criticism of imported olive oil quality.”

Even ardent backers of American olive oil disagree with California Olive Ranch’s fixation on imports. They’d rather see the domestic industry grow on its own, rather than resort to protectionism.

“You can’t just shut things down and cut your nose to spite your face,” said Mary Squires, a former Georgia state senator and a member of the Extra Virgin Alliance, an international trade association that issues extra virgin producers a seal of authenticity.

“This is an international business, and what I’m noticing is that the U.S. has a lot of internal conflict, as opposed to stepping it up and being a world player,” Squires added.

One of the biggest pushes to restrict imports came in 2012, when the California Olive Ranch and other growers launched a plan to establish a USDA marketing order. That would have exacted tougher quality standards on imports. The effort was dealt a punishing blow by the importers and their superior political muscle.

Despite the defeat, momentum hasn’t died. The California Olive Ranch and fellow domestic producers succeeded in lobbying for the U.S. International Trade Commission to issue a report, examining competition between domestic and foreign olive oil producers. The study, released in August, was applauded by U.S. producers, with the hope it could one day spur trade action.

“The challenge is to keep growing,” said Guillermo Romero, a spokesman for the Spanish investors. “It’s a long-term investment. It’s not something we expect a return on in a short period of time. To create an industry takes decades.”