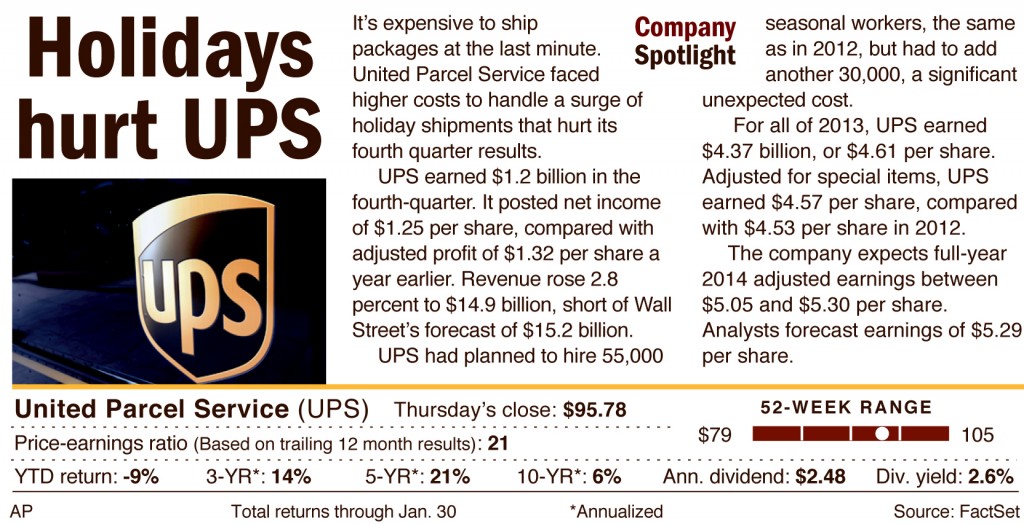 UPS earned $1.2 billion in the fourth quarter, but a last-minute surge in year-end shipments drove up costs and hurt results.

United Parcel Service Co. on Thursday reported net income of $1.25 per share in the final three months of 2103, compared with adjusted profit of $1.32 per share a year earlier. Revenue rose 2.8 percent to $14.9 billion, short of Wall Street’s forecast of $15.2 billion.

The company announced two weeks ago that earnings would fall short of expectations because of higher costs to handle a crush of year-end shipments that crested several days later than the company had expected. UPS had to hire an extra 30,000 seasonal workers to handle the rush. It says bad weather in December was also a factor.

UPS was undone in December by a big increase in online shopping and a crush of last-minute orders by shoppers who jumped on offers of free shipping until the final days before Dec. 25. An unusually late Thanksgiving added to UPS’s challenge by shrinking the traditional shopping-and-shipping season by several days.

“The increased volume put a strain on our network, causing delays. In response, UPS deployed additional people and equipment, placing a greater emphasis on service than cost,” said UPS CEO Scott Davis, in a statement.

Analysts expect that UPS will make changes for next year-end shopping season, including higher charges for last-minute deliveries to avoid the same kind of last-minute crush.