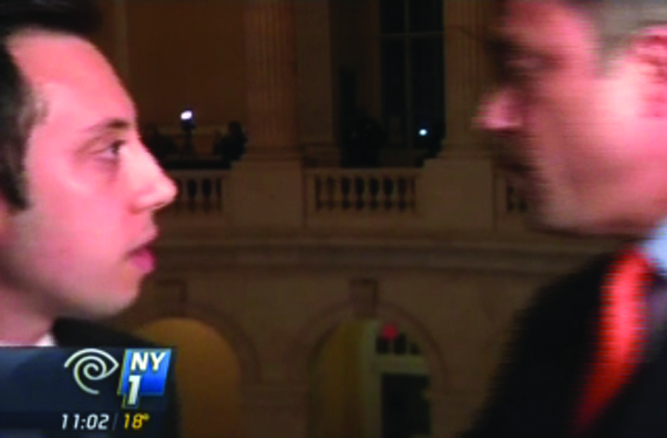 Rep. Michael Grimm has never been shy about promoting himself as a tough guy.

When he ran for Congress in 2009, he highlighted his service in the Marines and as an undercover FBI agent. After his election, he brushed off allegations that he’d once brandished a gun during an early-morning altercation by saying he was armed but hadn’t verbally threatened to kill anyone.

“That’s not my personality. I don’t need to speak that way,” he told a writer for the New Yorker. “A guy with a gun who knows how to use it doesn’t need to say anything.”

The temperament of the Staten Island Republican is at the forefront again after he was caught on camera threatening a news reporter.

The confrontation occurred on a balcony in the Capitol following the president’s State of the Union address Tuesday night. Grimm walked out of an interview with NY1 when reporter Michael Scotto tried to throw in a last question about a long-running FBI investigation into his campaign finances.

After Scotto finished, Grimm stormed back, leaned into Scotto and said, “Let me be clear to you. If you ever do that to me again, I’ll throw you off this balcony.”

Scotto protested, saying he was asking “a valid question.”

Asked about it soon afterward, Grimm was defiant. In a statement, he said he felt Scotto had been disrespectful and unprofessional. But after a morning of heavy public criticism, he phoned Scotto to apologize.

“He said he overreacted,” Scotto said. “He said that the behavior that he showed wasn’t him. So I accepted the apology.”

Later Wednesday, Grimm told a group of reporters that he would probably be getting an earful from his mother.

“The bottom line is, sometimes I wear my emotions on my sleeve,” he said. “I was wrong. It shouldn’t have happened.”

In 2000, a police officer filed a lawsuit against Grimm over an incident a year earlier in Queens. Gordon Williams said Grimm had gotten into a fight, then returned at 2:30 a.m. carrying a gun.

Williams claimed that Grimm returned at 4 a.m. with another FBI agent and a group of cops in a search for the men he’d fought.

Grimm later said that he did take out his gun, but only to move it from an ankle holster to his waistband, and that he returned to the club because Williams had refused to call 911.

“A leader can’t do that. And if the leader does that, those in power, those in the leadership structure have to speak out,” he said. “So I would hope that the House leadership says very strongly this is unacceptable behavior.”

A spokesman for House Speaker John Boehner said, “Rep. Grimm has apologized, and the speaker believes that was appropriate.”