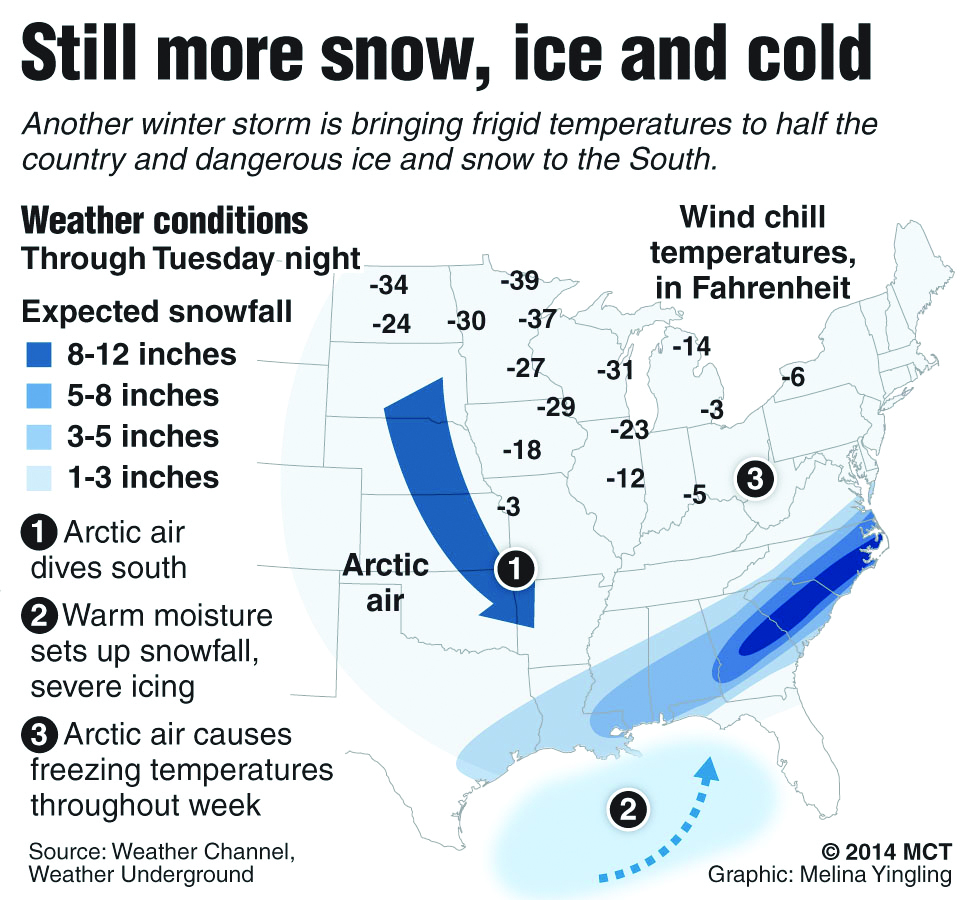 Cities rolled out snow plows that hardly ever leave the garage, a hardware store sold feed scoops for use as snow shovels and alligators in the Okefenokee Swamp burrowed into mud to stay warm Tuesday as a winter storm brought snow, ice and brutal cold to the Deep South, a part of the country more accustomed to hurricanes.

As many as 50 million people across the region could be affected. Shortly after snow began falling in Atlanta, the business hub of the Southeast, traffic came to halt. Interstates were clogged as commuters ended their workday early, and office security guards and doormen took to the streets downtown to try to direct traffic amid a symphony of blaring car horns. At the world’s busiest airport nearby, about 900 flights had been canceled.

In northeastern Alabama, some schools held classes, but quickly had to change course midmorning and dismiss students early because the storm arrived earlier than forecasts predicted. By that time, roads were too icy for travel in some areas and officials said hundreds of students may have to spend the night in classrooms or gyms.

“They have food and we have gas heat and the electricity is on, so that is a possibility,” DeKalb County Emergency Management Director Anthony Clifton said. “We will have a campout before we will send them out into an unsafe situation.”

Motorists from Texas to Virginia were warned to stay off the roads. Popular warm-weather tourist destinations — Charleston, S.C.; Savannah, Ga.; Pensacola, Fla.; Virginia Beach, Va.; and New Orleans — expected ice and snow over the next two days, rare occurrences in places that seldom even see freezing temperatures for long periods of time.

In Charlotte, N.C., Mike Hammond pushed a grocery cart filled with food to his car and looked at the ominous, gray sky.

“You never know what’s going to happen,” he said. “But I’m making sure I have the staples — and batteries for my flashlights in case something happens to the power. I want to be prepared.”

Meanwhile, in the Midwest, plummeting temperatures and increasing winds took root for another day even as the storm moved south. Several states in the central U.S. saw schools and other facilities close for a second consecutive day as dangerous wind chills were predicted. In Minnesota, forecasters said wind chills could reach 35 to 50 degrees below zero.

“We’re fixing to put the ice melt out, and we’ve got plenty of sand here to mix in,” Maron said shortly before dawn.

In Savannah, residents braced for a winter whiplash, barely 24 hours after the coastal city hit a T-shirt friendly 73 degrees. Less than 1/4 inch of ice and up to 1 inch of snow was possible in a city that hasn’t seen much snowfall on its manicured squares in the last 25 years.

Jason Deese with the National Weather Service said the snow totals would matter less than the ice potential.

In rural Mississippi, four people died when an early morning fire destroyed a mobile home near the Alabama border. Investigators believe a space heater was to blame as temperatures dipped to about 20 degrees overnight.