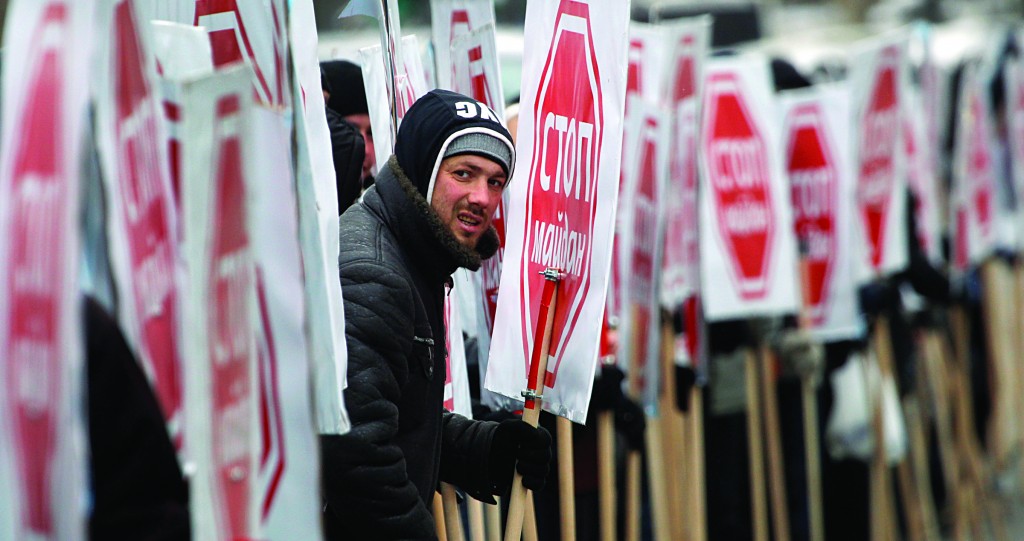 In back-to-back moves aimed at defusing Ukraine’s political crisis, the prime minister resigned Tuesday and parliament repealed anti-protest laws that had set off violent clashes between protesters and police.

The two developments were significant concessions to the anti-government protesters who have fought sporadically with police for the last 10 days after two months of peaceful around-the-clock demonstrations. The protests erupted after President Viktor Yanukovych decided to turn toward Russia for a bailout loan instead of signing a deal with the European Union, but have since morphed into a general plea for more human rights, less corruption and more democracy in this nation of 45 million.

The departure of Prime Minister Mykola Azarov removes one of the officials most disliked by the opposition forces whose protests have turned parts of Kiev, the Ukrainian capital, into a barricaded maze.

However, Azarov’s spokesman told the Interfax news agency that deputy Prime Minister Serhiy Arbuzov will assume temporary leadership of the Cabinet in the meantime. Such a move is unlikely to please the opposition, as Arbuzov is widely viewed as just another staunch ally of Yanukovych.

Other key issues remain unresolved in Ukraine’s political crisis, including the opposition’s repeated demands for Yanukovych to resign and for a new election to be held.

Azarov’s resignation came just before the opening of a special parliament session that repealed anti-protest laws that had set off violent clashes between protesters and police.

Yanukovych earlier this month had pushed through new laws to crack down on protests and raise prison sentences for creating disorder. The laws also prohibited people from wearing helmets and gas masks, which many have done for fear that riot police would try to violently disperse protests.

Arseniy Yatsenyuk, a lawmaker who is one of the opposition’s top figures, hailed the parliament’s move.

“We have repealed all the laws against which the whole country rose up,” he said.

Yanukovych over the weekend had offered the premiership to Yatsenyuk, but the opposition leader refused the post.

Parliament will consider an amnesty measure Wednesday for scores of arrested protesters. But Yanukovych has said the amnesty is only possible if demonstrators clear the streets and vacate the buildings they now occupy — a condition that is probably unacceptable to many.

The prime minister’s departure on Tuesday brought encouragement to those at Kiev’s sprawling protest encampment but no inclination to end their demonstrations.

“The authorities are afraid and making concessions. We should use this moment and continue our fight to achieve a change of power in Ukraine,” said 23-year-old demonstrator Oleg Rudakov.

The opposition had accused Azarov of mismanaging the economy and condoning corruption, and they have ridiculed the Russian-speaker for his poor command of Ukrainian. Animosity toward him grew after the protests started in November when he labeled demonstrators extremists and refused to listen to any of their demands. As head of the Cabinet, he was also seen as bearing responsibility for the recent use of force by police.

Yanukovych’s cash-strapped government just managed to avoid bankruptcy with the money pledged in November by Russian President Vladimir Putin. Russia spent $3 billion to buy Ukrainian government bonds in December and has promised to spend up to $15 billion total.

Putin said Tuesday that Russia will abide by the deal to buy those bonds and offer its neighbor cheaper natural gas even if the Ukrainian government ends up being led by the opposition.

Russia’s main concern regarding Ukraine is to protect Russia’s financial commitments not worry about geopolitical concerns, Putin said in Brussels at a Russia-EU summit.

“Will we revise our agreements on credits and energy if the opposition comes to power? No we won’t,” he said.