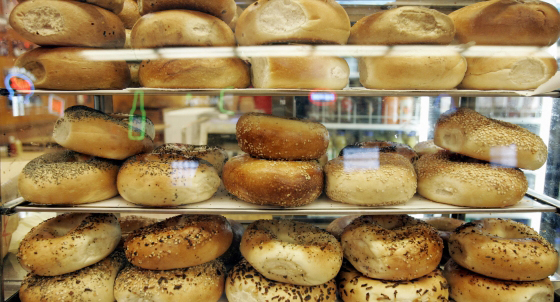 Earlier this month, newly elected New York City mayor Bill de Blasio came under fire for his pizza-eating technique. Late last week, the mayor traveled to Washington, D.C., and was given a second chance to establish his culinary authenticity: A journalist asked him where to buy bagels in New York. Mayor de Blasio recommended a shop in his hometown neighborhood of Park Slope, Brooklyn. To his relief, no one began muttering about Bagelghazi. Apparently, de Blasio passed the test.

It was not a new one: The press has scrutinized the bagel preferences of every New York mayor in recent memory.

New York’s last mayor, Michael Bloomberg, courted controversy when he said that a bagel he’d had at an upscale shop was “one of the best bagels I’ve ever had in my life.” During Rudy Giuliani’s first week as mayor in 1994, Newsday saw fit to report his family’s bagel-buying habits on the Upper East Side, “Donna Hanover Giuliani has occasionally stocked up, spending $30 or $40 in a visit. And the first family has regularly stopped in for breakfast.”

David Dinkins, New York’s first black mayor, had a bumpy relationship with Jewish voters. He may have had that relationship in mind when he made a public appearance eating bagels at a Lower East Side diner. (His wife, Joyce said she began most days with a bagel and coffee.)

At that campaign stop, Dinkins ran into his rival in the Democratic primary, Ed Koch. Koch, who served from 1978 until Dinkins defeated him in 1989, was the king of mayoral bagel-philes. He served 800 bagels at the reception for his inauguration in 1986.

Having a good answer to the bagel question is meant, in part, to demonstrate a politician’s appreciation for Jewish culture and, by extension, Jewish voters. But inquiring about our mayors’ bagels preferences also stems from the same culinary chauvinism that spawned Pizzagate.

Bagels, like pizza, are an affordable food brought over by early New York immigrants, and thus are seen to confer a kind of working-class credibility on those politicians who properly enjoy them. Plus, it’s easier to judge a mayor’s taste in breadstuffs than it is to evaluate his or her policies — particularly for the pundits in the press, who are sometimes loath to wade into the minutiae of, say, city tax rates.