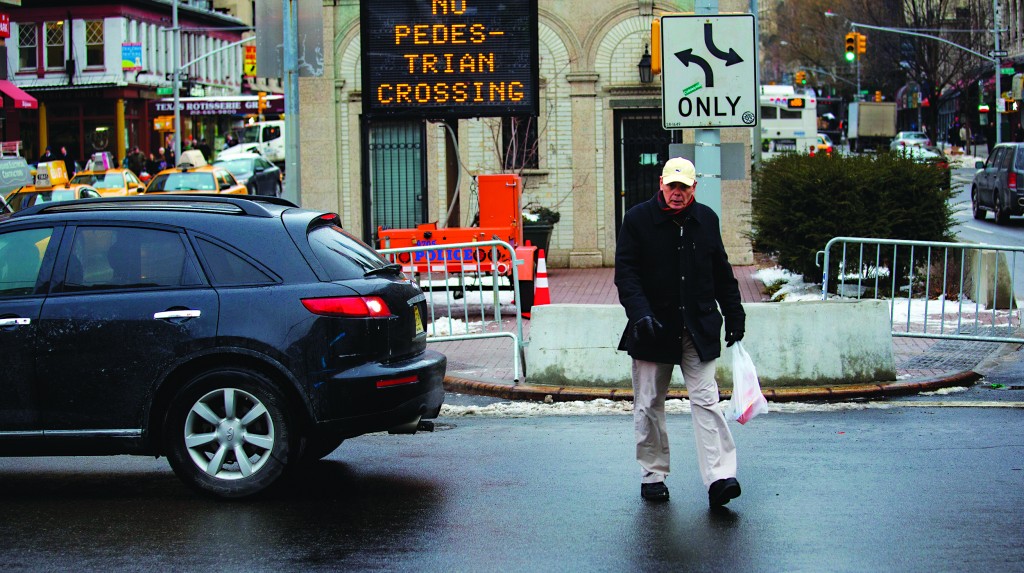 For many New Yorkers, crossing the street in the middle of the block or against the light is a way of life, part of an attitude that tells everybody, “I’m walkin’ here!”

“Of course I jaywalk!” says 70-year-old Peter Standish, a retired corporate attorney and lifelong New Yorker, adding that he occasionally texts, reads and even does crossword puzzles while crossing. “I do look up often,” he noted.

But with 12 pedestrians deaths so far this year, new Mayor Bill de Blasio is taking aim at that defiant attitude with steps that include increased awareness of the dangers and, in some places, a crackdown on an offense that has been long ignored. Police are actually handing out tickets to jaywalkers.

“We need to be sensitive to the fact that we do have a way of life, and many of us who’ve been here know that,” de Blasio said. “But we have to educate people to the dangers. There’s a lot more vehicles in this town than there used to be.”

A total of 172 pedestrians were killed in traffic last year in New York City, and de Blasio wants to attack the problem in the same way the city reduced murders to a record low of 333 last year.

The recent dozen pedestrian deaths include a 9-year-old boy hit by a taxi, a young doctor clipped by an ambulance as she crossed in front of her apartment building, and a 73-year-old man hit by a tour bus.

At the Upper West Side intersection of Broadway and 96th Street, near where three of the deaths occurred, a newly installed electronic sign warns pedestrians to “USE CROSSWALK” while police with a bullhorn make the same announcement. On a recent weekday morning, one officer directed traffic while others wrote tickets to both drivers and pedestrians — from $40 to $100 — depending on the violation.

The effort took a public relations hit last week when an 84-year-old man ended up bloodied after police tried to ticket him for jaywalking along Broadway. Kang Wong has filed notice he intends to sue for $5 million.

Some activists have complained that the focus on jaywalking is too abrupt, especially since police issued only 630 jaywalking tickets last year — not even two a day in a city of 8 million with more than 6,000 miles of streets.

“To go from no enforcement to this aggressive action is overkill,” said Mark Levine, an Upper West Side member of the City Council.

Mayoral spokesman Wiley Norvell said it was the neighborhood police precinct’s decision to respond to the recent deaths with tickets. In the rest of the city, police, transportation and health officials are working to prevent deaths through education.

In addition, the mayor wants police to take a harder line against speeding and failing to yield to pedestrians. He also wants speed cameras installed at the most dangerous spots — an action that requires state approval. And traffic lights could change more quickly in places where pedestrians get impatient and just walk.

Kenneth Jackson, a Columbia University history professor who often gives walking tours of the metropolis, said that the city lends itself to walking — and jaywalking.

“What New Yorker hasn’t jaywalked?” Levine asked. “But I’ve caught myself this past week — and I’m waiting for the walk sign.”