Regional WWII Paintings Rescued by Allies to be Auctioned
Regional 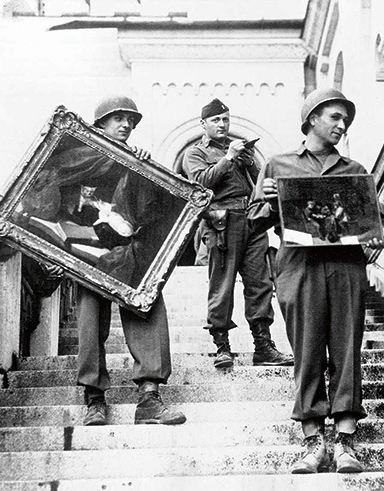 Paintings looted by the Nazis during World War Two and retrieved by the Monuments Men, the Allied group tasked with returning masterpieces to their rightful owners, will be sold at auction on Thursday in New York.

The works, which will go under the hammer during Sotheby’s sale of Important Old Master Paintings and Sculpture, were among tens of thousands of works recovered by the art experts.

“The scale of looting was absolutely extraordinary,” said Lucian Simmons, Sotheby’s head of restitution. “In France, for example, 36,000 paintings were stolen from institutions and largely from individuals. The Monuments Men managed to recover and return the majority of those.”

Two of the paintings were chosen by Adolf Hitler’s air force chief Hermann Goering for his personal collection. The works were taken from the family of Baron James Mayer de Rothschild in Paris in 1940, another from the widow of banker Andre Louis-Hirsch in Paris in 1941, and the third from Baron Edmond de Rothschild’s collection.

“It was unique,” Simmons said of the Monuments Men group. “The Allies at the end of World War II saw a need to put together a team to do this. They were art curators, museum officials, historians, who were drafted into the army for that period.”

The stolen works were scattered across Europe’s museums, salt mines and basements until the end of the war when the Nazi records were seized and the hunt to find the works of art began.

Last year German authorities revealed that Nazi-looted art valued at $1.38 billion was found in a Munich apartment. The collection had been held by Cornelius Gurlitt, the elderly son of an art dealer of part-Jewish descent who had been ordered by Hitler to buy up “degenerate art” and sell it to raise funds for the Nazis.

An unknown number of works plundered by the Nazi is still missing and museums examine the origins of works in their exhibits. Simmons said the Monuments Men made a massive contribution in finding the stolen works.

“People like paintings that are not only beautiful but also have a back story, and all of these paintings have this history, which in a way makes them more interesting,” he said.