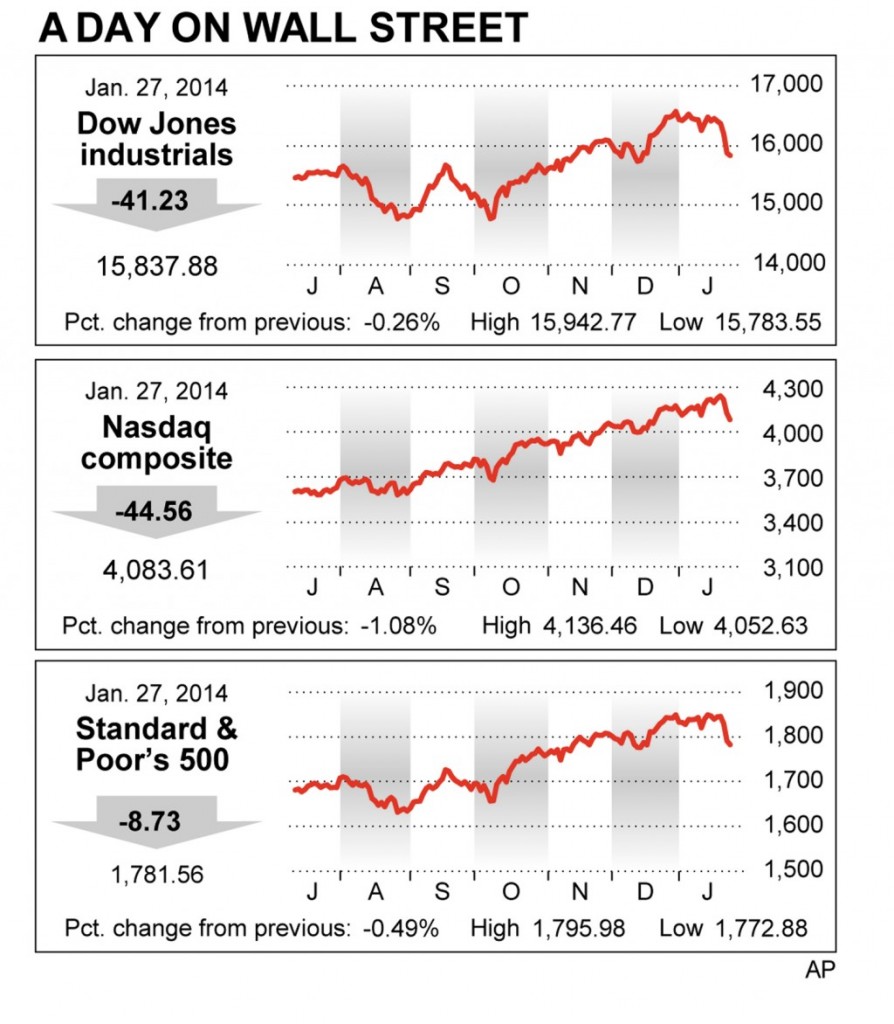 Shaky economies and plunging currencies in the developing world fueled a global sell-off in stocks Monday as fearful investors pushed prices lower across Asia and Europe, but many of the drops were not as steep as last week.

In the U.S. and other rich countries with healthier economies, investors also retreated, although the selling was more modest.

Major indexes in both Hong Kong and Tokyo fell more than 2percent. The selling spread to Europe and the U.S., as stocks slipped across the board, but the declines were much less than on Friday, when the U.S. market ended its worst week since 2012.

Jack Ablin, chief investment officer at BMO Private Bank, said he was encouraged that the U.S. losses were limited.

“We have an accelerating economy, low inflation and accommodative monetary policy,” he said. “The world isn’t falling apart.”

The market turbulence was set off last week by a report from China on a downturn in its manufacturing, more evidence that the world’s second-largest economy is slowing. That’s a big problem for Brazil, South Africa and other developing countries that have come to depend on exports to that country.

Adding to the troubles: The decision by the U.S. Federal Reserve last month to scale back its bond-buying stimulus for the American economy, which has helped keep interest rates low. Money that had flooded emerging markets looking for higher returns outside the U.S. has begun to come back now that rates may rise, battering those markets.

Despite Monday’s widespread selling, experts say the troubles in China and elsewhere in the developing world are unlikely to derail a global economic recovery that appears to be gaining momentum. Growth in the world’s wealthy economies is expected to pick up the slack.

The International Monetary Fund expects the global economy to grow 3.7 percent this year, up from 3 percent in 2013, carried along by faster growth in the United States and the 17 countries that use the euro. The IMF expects China’s growth to decelerate from 7.7 percent last year to 7.5 percent in 2014.

Compared with a couple of years ago, the U.S. economy is in a better position to withstand a Chinese slowdown. American consumers have paid down debts and can spend more freely. The housing market is recovering from the depths of the Great Recession.

Helping investor spirits in the U.S. are decent corporate earnings. Caterpillar was the biggest gainer in the Dow on Monday, rising $5.12, or 6 percent, to $91.29, after the earth-moving equipment maker reported fourth-quarter net income that easily beat analysts’ estimates.

After gains of nearly 30 percent in the S&P 500 last year, though, investors in U.S. stocks have been nervous, selling on any whiff of bad news.

“When they see a little negative news, they wonder, ‘Is this going to continue or should I run for the doors?’” said Sean Lynch, global investment strategist at Wells Fargo Private Bank.

Losses in the U.S. eased Monday after a recovery in the battered currency of Turkey, one of the flash points of emerging market troubles. The Turkish lira initially sank to a low of 2.39 per dollar, then recovered to 2.29 per dollar after the country’s central bank said it would hold an emergency policy meeting, raising hopes it will shore up the currency.

In addition to a slowing China and a pullback by the U.S. Fed, there are country-specific reasons for dropping stocks.

In Argentina, where inflation is running as high as 30 percent, the peso has collapsed and the government is running short of U.S. dollar reserves it could use to buy its currency and prop it up.

In South Africa, a strike by tens of thousands of platinum miners is raising the specter of violence in the streets. And in Turkey, a corruption scandal has destabilized the government and scared investors into selling the currency, the lira.

The government of Argentina announced Monday that it citizens can buy up to $2,000 per month, easing currency restrictions. The Argentine peso has fallen the most against the dollar in 12 years.

On Monday, a gauge of emerging market stocks, the MSCI Emerging Markets ETF, was down 0.7 percent. It has fallen 9 percent so far in 2014 after a nearly 5 percent loss last year.