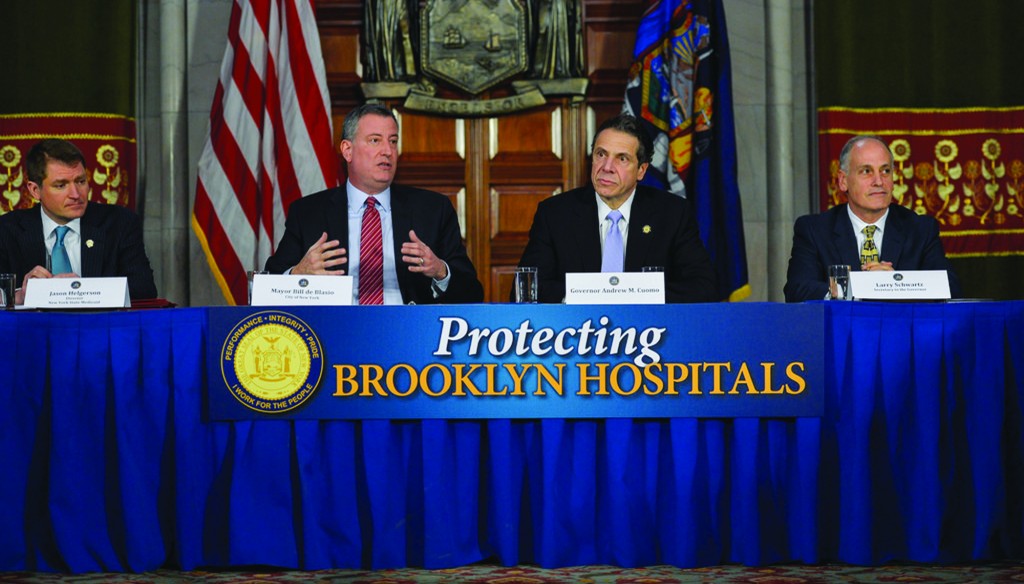 New York City Mayor Bill de Blasio shared a backslapping hug with Gov. Andrew Cuomo and told lawmakers they had an obligation to allow a tax hike on the city’s wealthier residents as he continued pressing for his universal prekindergarten proposal at the state Capitol on Monday.

De Blasio needs Albany’s OK before the city can approve the tax to fund his signature proposal. But Cuomo, a fellow Democrat, has been cool to an election-year tax increase and it was not clear whether the state Legislature would consent. De Blasio used his appearance before a state budget hearing Monday to argue that Albany has the obligation to honor the “city’s right to self-determination” by letting taxes  on the wealthy be increased.

De Blasio released a report Monday saying the pre-K program would reach 53,000 children who need it by September and up to 73,000 by the next year. The new mayor says a small increase in the tax rates on New York City residents who make $500,000 or more annually is the only steady, reliable way to cover the $340 million annual cost. Cuomo, stressing his support for statewide universal pre-K, wants to fund it with existing money in the budget.

De Blasio’s tax lobbying comes at an unwelcome time for Cuomo, who is promoting a broad tax relief program that includes politically popular property tax freezes. But both men played down suggestions of personal friction Monday. They welcomed each other with a hearty hug at a press event about their shared goal of getting a $10 billion federal Medicaid waiver.

“This is someone I’ve had the honor of working with for almost 20 years,” de Blasio said. “So I hope people understand when there’s this depth of personal relationship, that we talk about a variety of issues all the time.”

Still, there was no indication that either Cuomo or de Blasio was ready to bend on how to fund pre-K. Cuomo said Monday he continues to believe his proposal was the best for the state.

“We have decided and we are committed to doing universal pre-K,” Cuomo said, seated next to de Blasio, whom he described as his friend. “The second question is: How will you do it? And that’s the discussion that we’re going to be having over the next several weeks.”

New York City officials cannot raise tax rates on their wealthy residents without a “home rule” message from the state Legislature. Such messages to localities are common. Democratic state Sen. Diane Savino of Staten Island, one of the city lawmakers who greeted de Blasio cordially, told the budget hearing that lawmakers were set to approve five other home rule messages later that day.

“There are some who say that Albany shouldn’t approve our plan because the state government simply cannot raise any taxes right now,” said de Blasio, a 52-year-old Democrat. “We’re not asking Albany to raise the state income tax by a single penny to pay for universal pre-K and after-school programs in New York City. We’re simply asking Albany to allow New York City to tax itself.”

Some Republican members of the panel, including members of the Senate’s ruling coalition, seemed more dubious about the need for a city tax increase.

GOP Assemblywoman Jane Corwin of the suburban Buffalo area said she was concerned about raising taxes in a time when just 35,000 city residents pay 40 percent of the taxes.

“What happens if some of them leave the state?” Corwin asked.