President Barack Obama will work with Congress where he can and circumvent lawmakers where he must, his top advisers warned Sunday in previewing Tuesday’s State of the Union speech.

Obama faces a politically divided Congress on Tuesday and will use his annual address to demand expanded economic opportunity. Absent legislative action, the White House is telling lawmakers that the president is ready to take unilateral action to close the gap between rich and poor Americans.

So the White House is eyeing compromise on some priorities, Obama advisers said. But the president is also looking at executive orders that can be enacted without Congress’ approval.

“The president sees this as a year of action to work with Congress where he can and to bypass Congress where necessary,” White House press secretary Jay Carney said. 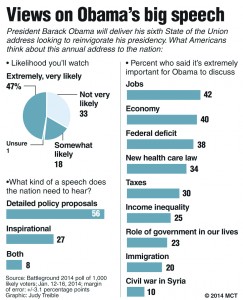 “The president has sort of hung out on the left and tried to get what he wants through the bureaucracy as opposed to moving to the political center,” said Sen. Mitch McConnell of Kentucky, the GOP Senate leader.

Added Sen. Rand Paul (R-Ky.): “It sounds vaguely like a threat, and I think it also has a certain amount of arrogance.”

With campaigns for November’s election on the horizon, there’s scant reason for the White House to be optimistic about Republican support for measures to revive a bipartisan immigration bill that has passed the Senate, an increased minimum wage or expanding prekindergarten programs.

This article appeared in print on page 3 of the January 27th, 2014 edition of Hamodia.