Business Aluminum Is Muscling Its Way Onto Autos
Business 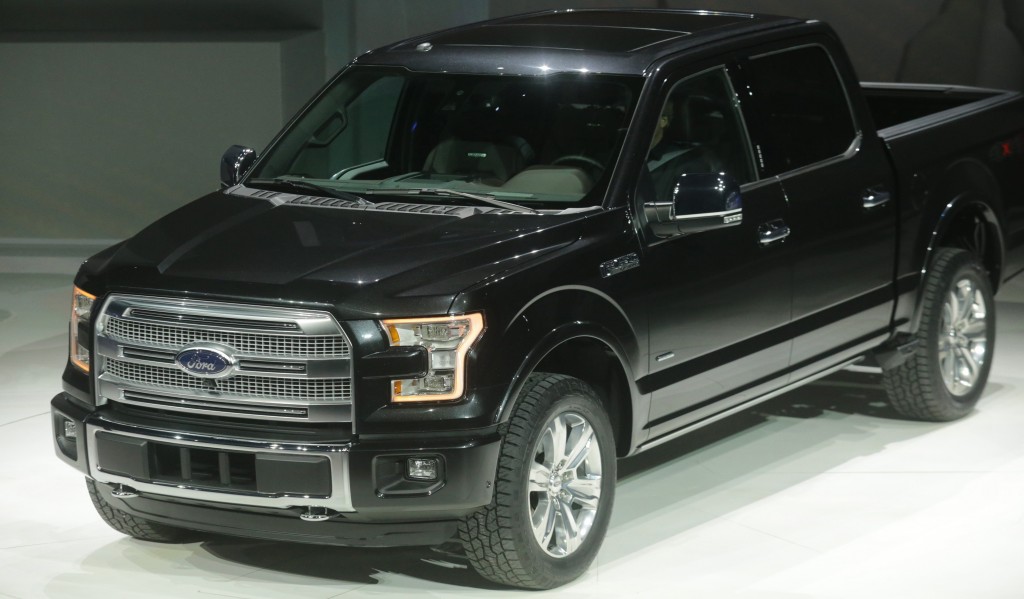 Mustang versus Camaro. BMW versus Mercedes. Camry versus Accord. These are among the biggest rivalries in the automobile world.

Get ready for the next epic battle: aluminum versus steel.

“This has become a real competition,” said Golam Newaz, an automotive-materials engineer at Wayne State University in Detroit.

The growing contest between the two metals was evident in the new car introductions at the North American International Auto Show in Detroit this month.

Automakers are looking ahead to the stringent federal standard requiring a near-doubling of fuel economy by 2025. Putting cars on a diet is the only way to hit that goal.

When Ford Motor Co. introduced the next generation of its top-selling Ford F-150 truck this month, the completely re-engineered pickup featured aluminum from the hood to the tailgate. The new Ford truck is 700 pounds lighter than the one it replaces.

Here’s why: A cubic centimeter of steel weighs about 8 grams, compared with just 2.7 grams for aluminum, Newaz said.

The F-series truck has historically been a drag on Ford’s corporate average fuel economy, the statistic watched by regulators, said Mark Fields, the automaker’s chief operating officer. Now, it will play a key role in boosting the average, Fields said.

Although Ford has yet to release fuel economy numbers for the truck, analysts at the show said it could reach up to 30 miles per gallon in highway driving.

Meanwhile, Mercedes-Benz debuted the next C-Class sports sedan, touting how its body will be built mostly with lightweight aluminum. The Benz weighs about 200 pounds less than the previous sedan.

Still, the switch to aluminum has its complications. There are already reports of manufacturing delays, as Ford goes mass-market with a material previously reserved for car hoods or the bodies of small-volume luxury vehicles and sports cars.

Aluminum is more expensive to handle than steel and more complicated to stamp and weld, requiring higher heat and more electricity.

Another hitch is that it can add to the expense of repairs, and not as many body shops know how to work with it, said Larry Dominique, the president of auto-valuation company ALG Inc. and the former vice president of product planning for Nissan in North America.

But that’s less true than in previous years and will fade as more aluminum is used in popular models, said Kevin Lowery, a spokesman for aluminum company Alcoa Inc.

When Audi introduced its A8 luxury sedan with an aluminum chassis two decades ago, “there were only a handful of shops capable to repair it. It had to be shipped to one of those centers to be fixed,” he said.

But now the metal is the second-most-used material in making cars, and its utility is growing beyond car hoods, its most common application, Lowery said.

“The next frontier is in doors and the body,” he said.

Alcoa projects that the use of rolled, sheet aluminum for auto production will grow tenfold by 2025.

The company is pouring money into factories to ramp up.

Alcoa has contracts in hand to sell all of the expanded supply coming out of those plants, Lowery said.

“We have been a pioneer in the use of ultra-high-strength steel,” St. Cyr said.

The new-generation Acura MDX sport utility, for example, is about 275 pounds lighter than its predecessor, without a wholesale shift to an aluminum body.

The high-strength steel that Honda uses allows the automaker to reduce the thickness, compared with lower-strength steels, and achieve comparable or even higher-strength performance. It also helps Honda achieve the high safety ratings it earns in government and insurance-industry crash tests.

Indeed, steel has qualities that aren’t easy to replace, said Newaz, the engineer.

Firstly, it’s less expensive than aluminum. And when you are making cars by the millions, shaving expense is just as important as reducing weight.

Rigidity and strength are important in automotive design, not only for safety but also to improve the way a vehicle drives and handles.

The steel industry knows it’s in for a fight.

“It is quite a materials battle,” said Ronald Krupitzer, vice president of automotive applications at the Steel Market Development Institute.

“Our research shows that we have reached only about half of the weight reduction that we can achieve in steel for vehicles,” Krupitzer said.

The fight between the two metals is already influencing the talking points for automakers.

Look for General Motors – which, for the most part, stuck to steel in the design of its new Chevrolet Silverado pickup – to “instill some fear and doubts about aluminum in trucks,” said Brian Johnson, an analyst with Barclays Capital.

GM is focusing on the added expense of aluminum and how that might translate for consumers.

“There are good places to use aluminum that don’t cost people on insurance money to repair body panels,” said Mark Reuss, the global product development chief for General Motors Co.

Yet if the move to aluminum works as Ford expects, the shift would change the paradigm for automobile production, said Jake Fisher, automotive test director for Consumer Reports.

Ford sold 763,000 F-Series trucks last year, making it the bestselling vehicle in America. Putting millions of trucks with aluminum bodies on the road in just a couple of years would jump-start manufacturing infrastructure and encourage other automakers to follow suit. It would make aluminum mainstream, Fisher said.

Yet even that could be short-lived. While the new Ford truck drew thousands of onlookers at the auto show, an electric BMW i3 was sitting quietly in one corner of the sprawling Cobo Center in Detroit. Its body is made from a plastic-like carbon fiber.

“What you are now beginning to see is the drive toward aluminum,” said Newaz, the Wayne State professor. “But it will be short-term, maybe five to 10 years. And then, down the road, there will be more cars built with carbon fiber composites.”