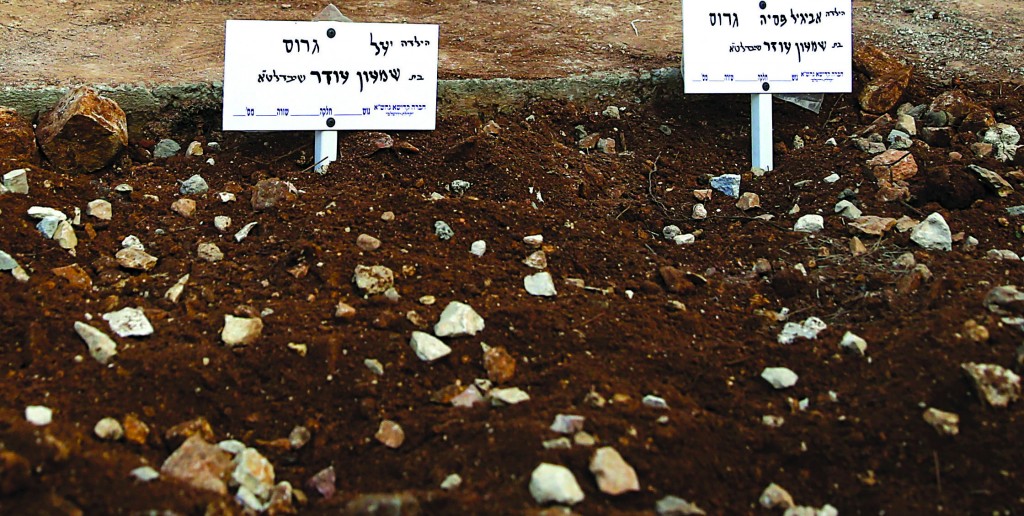 2 still in critical condition after poisoning

In one of the most heartbreaking scenes in recent memory, the two small children who perished in an accidental poisoning in Yerushalayim, Avigail and Yael Gross, z”l, were laid to rest on Thursday afternoon, even as their brothers, Michael, 7, and Yitzhak, 5, remained in critical condition.

The father, Rav Shimon Gross, was himself released from hospital on Thursday in time for the levayah and then to be at his children’s bedside at Schneider hospital in Petach Tikvah.

“I very much appreciate the feeling of unity, the power of Am Yisrael. We are optimistic, but we need many prayers,” he said.

In an apparent reference to the suspected individual’s negligence which caused the great tragedy, he said, “We are not engaged in blaming. We are engaged in trying to save the children.”

During a moving and eloquent hesped, the father recalled the story of the deaths of the sons of the great Talmudic sage Rabi Meir and his wife Bruria.

Rabi Meir’s sons died suddenly on Shabbos. Hoping to soften the devastating blow for her husband, Bruria hid their deaths until after Shabbos had ended, then asked Rabi Meir, “I was given a treasure to guard, and now the owner wants it back. Must I give it back?” When he answered in the affirmative, she showed him the bodies of their sons, saying, “These are the treasures, and G-d has taken them back.”

“We can ask, why did Rabi Meir cry? After all, he himself told his wife Bruria that what was given for safekeeping must be returned.

“The answer is, that when the owner comes to retrieve his item at the proper time, then it really is time to return it. But, when the owner asks for his item before the time has come, it is an indication that we were not good guardians,” he said. “Maybe we weren’t worthy of these gifts for safekeeping, we didn’t merit to raise them.”

“G-d gave, and G-d took away,” the bereaved father said.

Speaking of his two young daughters, “G-d, you gave us Avigail, who was so good and so pure, always asking, ‘Is this a mitzvah?’ She was such a pure spirit, she loved to help.”

“Yaeli just started talking, always saying, ‘Daddy, Mommy.’ She was so pure, so sweet. They were such good friends … Yesterday morning they were talking and happy, at night they were still dancing.

“G-d came and took them in an instant, from one second to the next. We didn’t even have time to pray,” he said.

“We have no questions,” he continued. “We don’t know the ways of Heaven, we don’t know why this happened to us. But if the Holy One, Blessed is He, brought us this crisis, He will give us the strength to endure it.”

“I ask of Avigail and Yael, children who were without sin, pure neshamos, that you beseech Heavenly mercy for your brothers, that they should have a complete recovery, in body and spirit. Ask Hakadosh Baruch Hu to say to our sorrows, “Enough” and that we should not know any more trials. Save us from all terrible and cruel sufferings.

“I ask of the public to be strong and pray. There is nothing else to do. I spoke with the doctors this morning and last night. They are doing everything possible, but they tell us: ‘We are only people.’

“There is no doubt that if all of us daven, if each individual takes upon himself some small resolution for good, they will have a full recovery, with G-d’s help.”