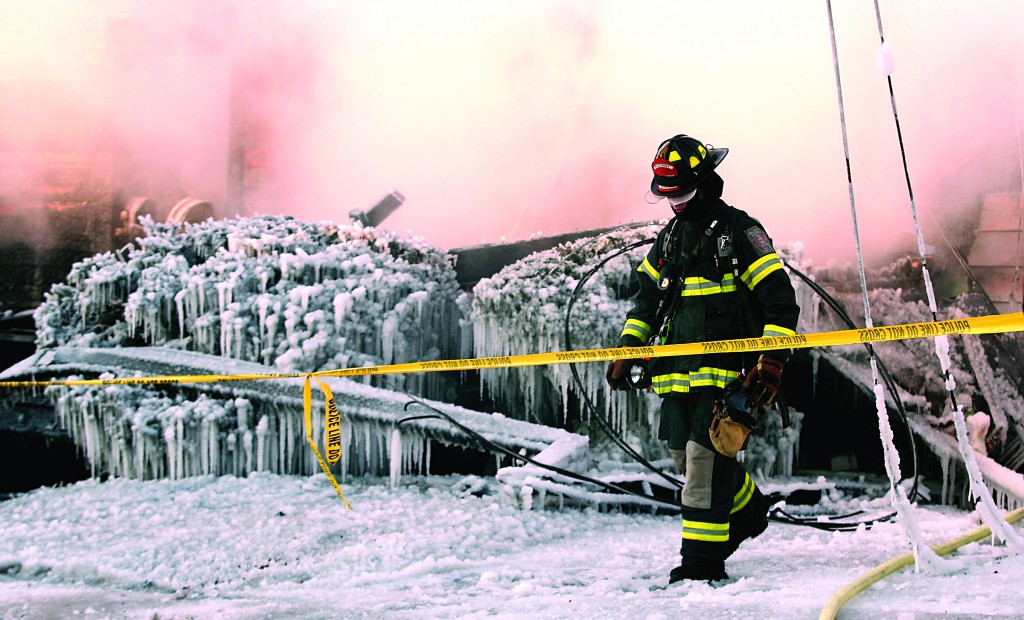 Bitter cold Arctic air is keeping the New York City area on ice, and it will likely last at least until the weekend, the National Weather Service predicted.

Temperatures in the single digits combined with the wind chill to make it feel like subzero degrees. But the frosty weather is expected to start warming up on Saturday.

“It looks like by Saturday we could get into the lower 30s,” meteorologist Michael Silva said, “but even that is below normal.”

The frigid weather began Tuesday night, shortly after up to a foot of snow blanketed the area, shutting roads, delaying hundreds of flights and closing schools across the Northeast.

Meanwhile, parents upset at Mayor Bill de Blasio for keeping the public school system open on Wednesday — the only school system to be open in the entire Northeast — apparently did more than just grumble.

A Department of Education spokeswoman said that more than half of New York City students stayed home following the snowstorm. They pegged Wednesday’s attendance rate at 47.1 percent. The last time it reached below 50 percent was in January 2011, when a similar snowstorm resulted in a 49.1 percent attendance rate.

The average daily attendance rate is about 90 percent for the 1.1 million students who make up the nation’s largest public school system. Private schools, including yeshivos, make up another 300,000 students. Yeshivos mostly stayed open on Wednesday.

On Thursday, de Blasio continued facing criticism for his handling of the city’s response to the storm. Hours after defending his administration’s response, he agreed late Wednesday that the unplowed boulevards of Manhattan, the first to be plowed under his predecessor, Michael Bloomberg, were unacceptable. He dispatched additional trucks and sanitation employees to clear the snow from the Upper East Side, a tony neighborhood which has slowed to a crawl since Tuesday’s storm.

As public advocate in 2010, de Blasio wrote a blistering three-page letter to Bloomberg over his botched snow removal efforts during a December storm. Bloomberg’s sanitation commissioner at the time, John Doherty, is a holdover who oversaw this week’s storm as well.

All major roads in Brooklyn and the other boroughs were plowed by the start of the business day Wednesday.

A Staten Island councilman said he wants to investigate the city’s snow-removal performance during the storm. Vincent Ignizio, leader of the tiny Republican caucus of the chamber, said Thursday that he intends to hold oversight hearings.

De Blasio, a Democrat, repeated on Thursday that he was “not satisfied with the response.”