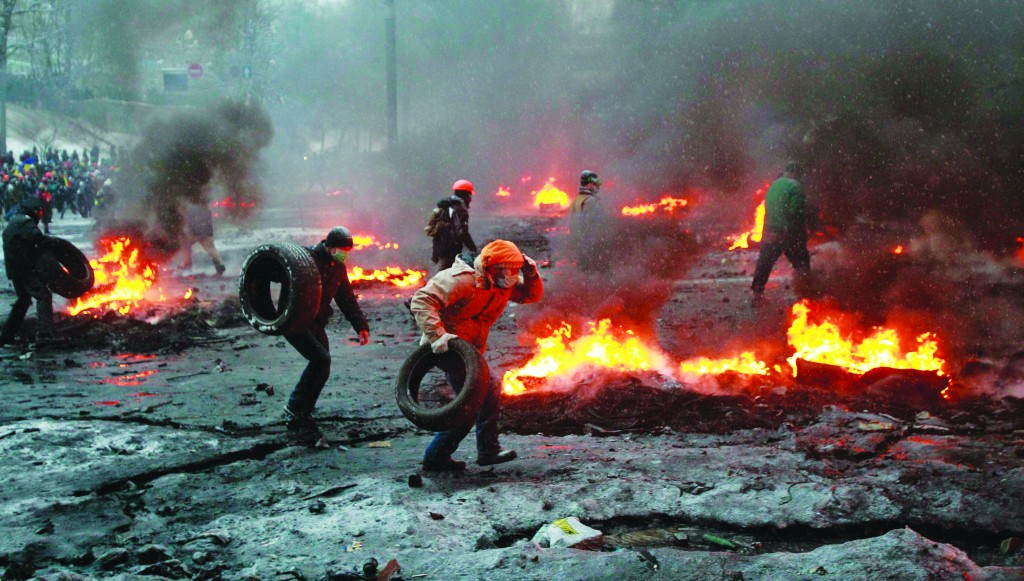 Ukrainian opposition leaders issued a stark ultimatum to President Viktor Yanukovych on Wednesday to call early elections within 24 hours or face more popular rage, after at least two protesters were killed in confrontations with police in a grim escalation of a two-monthlong political crisis.

The protesters’ deaths, the first since the largely peaceful protests started in November, fueled fears that the daily demonstrations aimed at bringing down the government over its decision to shun the European Union for closer ties to Moscow and over human rights violations could turn more violent.

With a central Kiev street ablaze and covered with thick black smoke from burning tires and several thousand protesters continuing to clash with riot police, opposition leader Arseniy Yatsenyuk urged tens of thousands of demonstrators in a nearby square to refrain from violence and remain in the main protest camp for the next 24 hours. He demanded that Yanukovych dismiss the government, call early elections and scrap harsh anti-protest legislation. It was last week’s passage of the laws cracking down on protests that set off the violent clashes.

“You, Mr. President, have the opportunity to resolve this issue. Early elections will change the situation without bloodshed and we will do everything to achieve that,” Yatsenyuk told some 40,000 people who braved freezing temperatures on Kiev’s Independence Square late Wednesday.

If Yanukovych does not concede, he added, “Tomorrow we will go forward together,” alluding to possible violence in the offing if the opposition’s objectives are not met.

Meanwhile, the government handed security forces extra powers, including closing off streets and firing water cannon against protesters despite the freezing temperatures. Police have already used water cannon but insisted it was only to put out fires. The government also deployed an armored personnel carrier at the site of the clashes.

During Wednesday’s confrontations, riot police violently beat and shot at protesters, volunteer medics and journalists. The Interior Ministry announced that 70 protesters had been arrested.

Prime Minister Mykola Azarov said the police did not have live ammunition and that opposition leaders should be held responsible for the deaths.

City health officials and police said that two people died of gunshot wounds during the clashes Wednesday morning, while the opposition contended as many as five people died. Oleh Musiy, coordinator of the protesters’ medical corps, told the Associated Press that four people died of gunshot wounds and the fifth died after falling from a colonnaded gate at a sports arena near the site of the clashes. Health officials contend that man survived and is in the hospital. Hundreds of others were injured in the clashes, Musiy said.

Meanwhile, another protester, Yuri Verbitsky, was found dead in a forest outside Kiev on Wednesday, according to his niece Oksana Verbitska. His friends and supporters believe he was kidnapped.

The United States responded by revoking the visas of Ukrainian officials linked to violence and threatened more sanctions. But it also condemned the extreme-right radical protesters for their aggressive actions. The EU condemned the violence and said it was also considering action against the Ukrainian government.

One of the victims was identified as Sergei Nigoyan, a 20-year-old ethnic Armenian who joined the protests in December after traveling from his home in the eastern city of Dnipropetrovsk. A video shows Nigoyan reciting poetry in the protest camp in Kiev’s Independence Square, also known as the Maidan. He then clenched his fist in a victory sign as a yellow-and-blue Ukrainian flag flapped in the background.

The mass protests erupted after Yanukovych spurned a pact with the European Union in favor of close ties with Russia, which offered him a $15 billion bailout. They swelled to hundreds of thousands after a small peaceful rally on Nov. 30 was violently broken up by police. 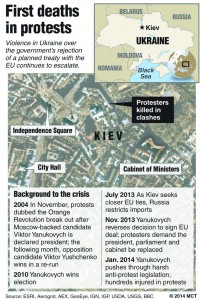 Seeing the government ignore their demands and opposition leaders unable to present a coherent plan or select a single leader, radical protesters have clashed with riot police since Sunday, hurling fire bombs and stones as police fired back with tear gas, stun grenades and rubber bullets.

Helmeted riot police moved in on hundreds of protesters, dismantling barricades, beating many with truncheons and firing shots at some. One man was attacked by over a dozen policemen, then forced to take off his winter jacket before being dragged away, where he was beaten again.

The police drove demonstrators down a hill toward the main protest site on Independence Square, where protesters have set up an extensive tent camp and rallied around the clock since Nov. 21. But the protesters soon returned, building barricades from giant sacks of snow and hurling rocks and firebombs at police lines. There was no immediate police move on the main camp.