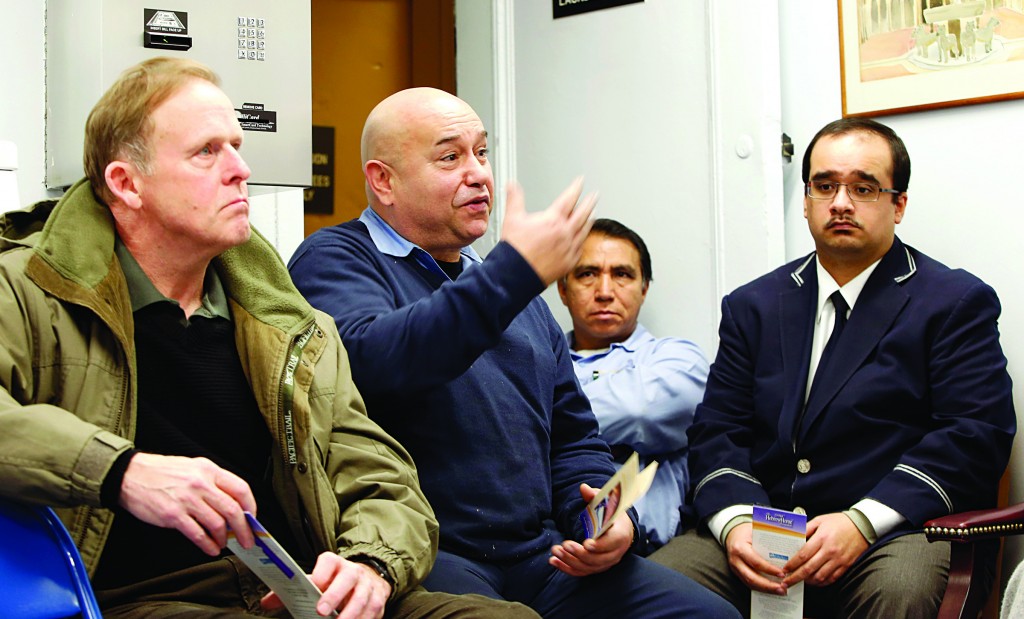 New York’s doormen are being enlisted as an army of eyes to look for signs of elder abuse: a stranger picking up the mail, the sudden presence of a rarely seen relative with an attitude, a bruise.

“Doormen know everything that’s going on,” Joy Solomon said before conducting a training session for doormen, porters and other apartment workers, fittingly held over the din of whirring dryers in the laundry room of a Manhattan building. “They know who’s going in, who’s going out. They have access and they have a relationship of trust. They’re a friendly face.”

Solomon, director of the Weinberg Center for Elder Abuse Prevention at the Hebrew Home in the Bronx, partnered with the building workers’ union in a grant-funded program to help doormen spot various kinds of elder abuse — physical, psychological and financial.

The training, which began several years ago, has been broadened to include others who come in contact with isolated seniors, such as Meals-on-Wheels delivery workers. An online version is in the works that could spread its message throughout the union’s coverage area, from Massachusetts to Florida.

Every new set of eyes counts. The National Center for Elder Abuse says lack of detection makes it impossible to know the extent of elder abuse. Solomon quoted from a 2011 study that said only about 4 percent of elder abuse incidents in New York are reported.

As an example of what can happen, she told the gathering of about 15 doormen and other workers of a woman whose son stole her prosthetic leg and sold it.

“It got him money and it kept her isolated and dependent on him,” Solomon said, adding that the man eventually drove the elderly woman into poverty and she now lives in a shelter.

Javier Rosa, who works the 11 p.m.-to-7 a.m. shift at a building, said he knows from his own experience that this is an idea that can work.

“There’s an old lady, sometimes she comes down late at night, she just wants to talk,” Rosa said. “She knows I’m here, she has nobody else, she trusts me. If something was wrong, I would know. I would never let anything happen to her.”

Solomon said workers should trust their gut feelings: “If you think something is going on, you’re probably right.”

She urged the workers to be on the alert for signs of physical decline, mental confusion and depression, which can increase a tenant’s vulnerability.

Perpetrators are often the elderly person’s own relatives but can also be bank workers, telemarketers and street scammers. A MetLife Mature Market Institute study found that elderly Americans lose $2.9 billion each year to financial abuse.

Solomon said a doorman can bring the mail directly to the tenant if he suspects someone is stealing a Social Security check. If a daughter walks out with a painting, she said, mention it to the tenant.

“You might say, ‘I saw your daughter going out with a painting,’ and if she says ‘What painting?’ you know she’s unaware.”

Some workers were concerned they could endanger their jobs by reporting an unconfirmed suspicion, but they were told they can make calls anonymously to the city’s Adult Protective Services agency. A spokeswoman said the agency is supportive of the training but can’t say how many calls might have been prompted by it.

Gene Kastner, manager of the building where the training took place, said he understands the vulnerability of the elderly from his time as a New York City police detective.

“We like to think of all our tenants as one big family,” he said, “and this is what a good family would do.”

Hope Iaccaci, a 73-year-old resident living alone in the building, said, it was comforting to know workers are looking out for her.

“It’s a great city for the elderly but it’s great that in your own building there’s that extra layer of protection.”