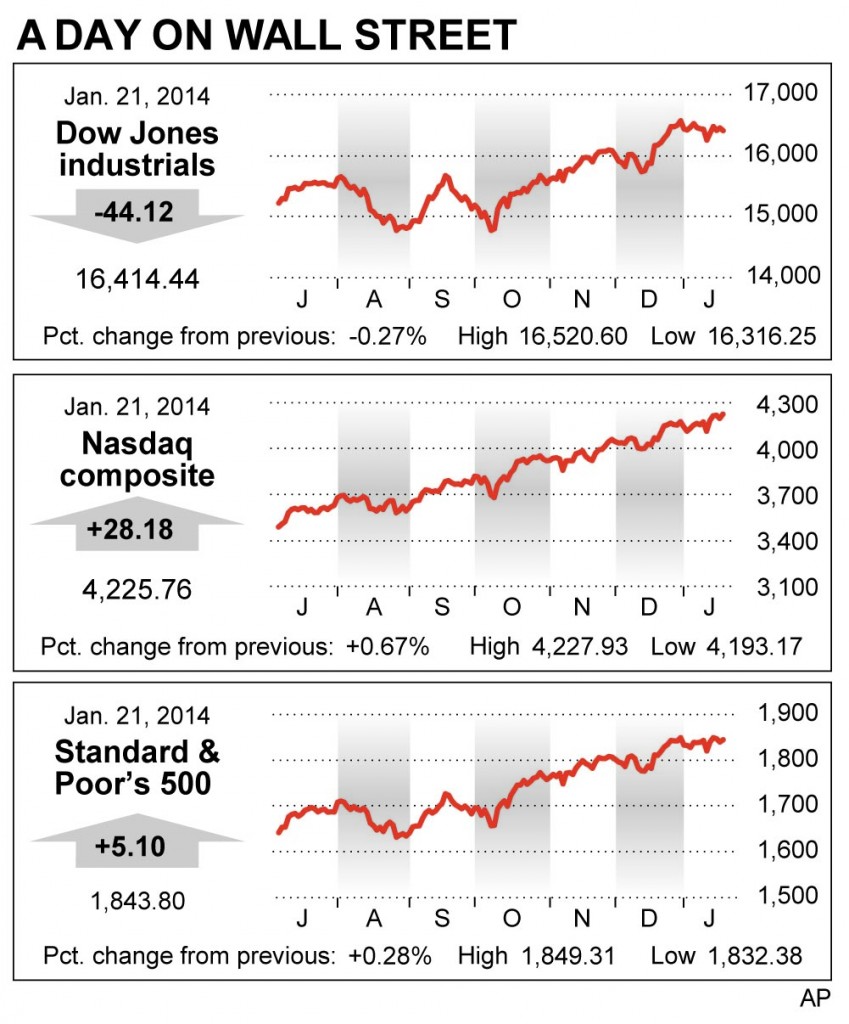 The Standard & Poor’s 500 index logged a small gain Tuesday on a mixed day for the stock market.

Health-care giant Johnson & Johnson slipped after it warned that pressure to keep prices low would likely mean slightly lower profits than forecast. Delta Air Lines gained after reporting a better-than-expected profit in the fourth quarter as fares and traffic rose.

Company earnings were the main focus for investors Tuesday as there were no major economic releases. So far, the stock market has failed to get a big lift from earnings reports and investors appear to be assessing the results more critically than they did a year ago.

“Earnings are coming in and, candidly, we’re getting a mixture picture for the fourth quarter so far,” said Jim Russell, an investment director at U.S. Bank.

J&J, one of the 30 members of the Dow, slipped $1.03, or 1.1 percent, to $94.03, helping pull the index lower. Another Dow component, Verizon Communications, fell after reporting its own earnings.

Among the day’s winners were Dow Chemical and Alcoa.

Dow Chemical rose $2.86, or 6.6 percent, to $45.93 after hedge fund Third Point LLC said Tuesday that it has acquired a significant stake in the company and wants it to spin off its petrochemicals division.

Alcoa surged 77 cents, or 6.8 percent, to $12.13 after analysts at JPMorgan raised their price target for the stock, predicting Alcoa will benefit from tightening aluminum markets.

After surging almost 30 percent last year, stocks are starting the year in a more subdued fashion. The S&P 500 is down 0.3 percent for the year.

In bond trading, the yield on the 10-year Treasury note rose to 2.83 percent from 2.82 percent on Friday. U.S. markets were closed Monday for the Martin Luther King Jr. Day holiday.

– Delta increased $1.01, or 3 percent, to $32.08 after reporting a better-than-expected profit in the fourth quarter as fares and traffic rose. The airline’s president said demand was strong, and forecast that profit margins would increase in the current quarter.

– Expedia dropped $3.02, or 4.2 percent, to $67.67 after a blog Search Engine Land reported Expedia online visibility fell dramatically, and cited actions taken by Google to punish companies that it believes are trying to game its search algorithms. Officials from Expedia did not immediately respond to requests for comment from The Associated Press.