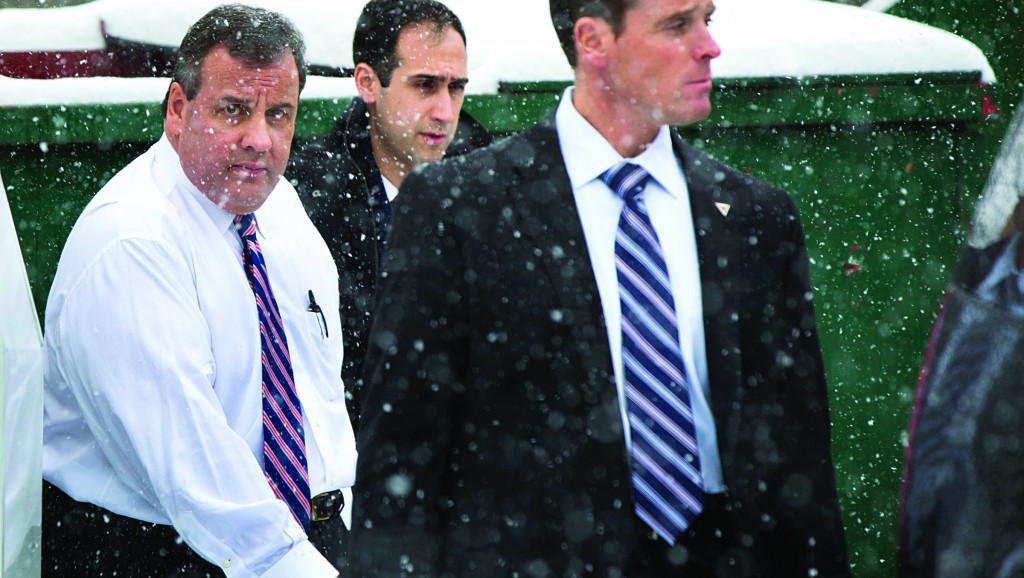 Gov. Chris Christie sought to turn back the clock as he was sworn into a second term Tuesday, saying voters gave him a mandate in November to “stay the course” and put aside partisan differences, even as Democrats ramped up an investigation into whether his administration abused its power.

Christie, considered a likely Republican presidential candidate in 2016, was inaugurated amid a snowstorm that forced him to cancel an evening celebration on Ellis Island, and then gave an 18-minute address that dwelled on his 22-point election victory in the fall. He did not mention the investigations that have already led to the firing or departure of four top aides or associates.

The people making up a broad coalition that returned him to office, he said, “have demanded that we stay the course they have helped set.”

“It was the largest and loudest voice of affirmation that the people of our state have given to any direction in three decades,” Christie said, noting priorities including the economy, education and improving access to jobs for recovering addicts. “We have no moral option but to heed the voice of the voters, and that is exactly what I intend to do.”

His speech came less than an hour after Democratic lawmakers announced they were consolidating twin probes into allegations that aides engineered traffic jams in September in the community of Fort Lee as political retribution, apparently against the town’s mayor for not endorsing his re-election bid.

Assembly Speaker Vincent Prieto, who was on the podium during the inaugural address, said the merger of Assembly and Senate committees was the “optimal approach to ensuring the people of New Jersey get the answers they need to these questions about the abuse of government power.”

Lawmakers have not decided whether the probe will also be extended to allegations raised over the weekend by Hoboken Mayor Dawn Zimmer. The Democratic mayor said Christie’s underlings tied the delivery of Superstorm Sandy aid to the low-lying city of 50,000 across from Manhattan to support for a prime real estate project.

Christie has built a national following as a blunt-talking and often funny politician who has striven to show that he could find common ground with Democrats on some key issues, including overhauling the state’s public-worker pension program and making it easier to fire teachers who are found to be underperforming.

Christie used his speech, as he often does, to bash Washington.

After his speech, Christie got a hug from former Democratic Gov. Jim McGreevey. Christie attended a prayer breakfast in Newark before heading to Trenton for the official ceremony.

Christie’s inaugural gala had been planned for Ellis Island, once a gateway for millions of immigrants and a symbolic location designed to showcase ideals of inclusiveness and his ability to appeal to a broad swath of voters. The hall set to host the event is actually in New York, though the Supreme Court ruled in 1998 that most of the island is in New Jersey.

The campaign directed that food prepared for the $500-a-person gala be donated to food pantries in the Jersey City area as several inches of snow fell on the state. Proceeds from inaugural tickets were also used to support three charities.