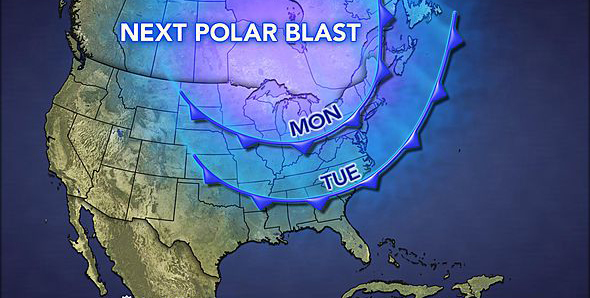 A winter storm is expected to dump Tuesday anywhere from six to 10 inches of snow in the New York City area, followed by a night of arctic temperatures.

The National Weather Service has issued a winter storm warning for the city, including western Long Island, from noon Tuesday through 6 a.m. Wednesday. Forecasters say the snow will be accompanied by strong winds.

The arctic air blast will follow the storm and likely remain in place for several days, with high temperatures staying in the mid-20s for the rest of the week.

The sanitation department says it has begun loading salt spreaders and preparing plows to handle the snow alert. The department is also coordinating efforts with the city’s Office of Emergency Management and the Transportation Department.

Alternate side parking regulations for Tuesday has also been suspended.

In New Jersey, forecasters say anywhere from 4 to 10 inches of snow could fall across the state on Tuesday. The snow should start by late morning and continue through the late evening hours, with the heaviest snow expected Tuesday afternoon and evening.

Central and southern areas are expected to be the hardest hit by the storm, which could also contain strong winds. Lakewood is in central New Jersey’s Ocean County.