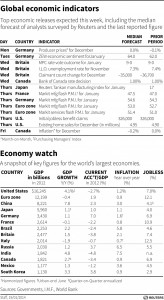 Big losses for Germany’s biggest bank meant European markets started the week on a sour note on Monday as slightly better than expected Chinese data failed to dispel a general air of caution.

Deutsche Bank reported a surprise pre-tax loss of 1.15 billion euros for the fourth quarter of 2013 due to heavy costs for litigation, restructuring and balance sheet reduction.

The bank was originally scheduled to report its results on January 29, but opted to release them early after the Wall Street Journal on Friday reported that a profit warning was possible.

Its shares were down almost 5 percent in early afternoon trading, dragging down bank stocks across Europe as Germany’s Dax down 0.3 percent, also led the region’s lengthy list of losing bourses.

Liquidity was lacking with U.S. markets closed on Monday for a legal holiday. The Dow Jones index  ended last week with a slim gain of 0.1 percent after some disappointing earnings, while the S&P 500 .SPX lost 0.2 percent for the week.

In Asia, a majority of share markets had stayed in the red on Monday, with Tokyo off 0.6 percent, Sydney down 0.3 percent and Shanghai down 0.6 percent. SSEC, adding to a miserable few weeks.

China’s annual economic growth slowed a tick to 7.7 percent last quarter, which was just ahead of market forecasts for 7.6 percent and at least countered fears that monetary tightening might have caused a sharper pullback.

“The economy may be a little more robust than people thought coming into 2014,” said Tim Condon, an economist at ING Group in Singapore.

Other data out of China was much in line with forecasts, with retail sales growing 13.6 percent in December from a year earlier, while industrial output rose 9.7 percent.

That resilience was considered a positive for Australia, given that China is its single biggest export market, and helped the Australian dollar clamber off a three-year trough of $0.8756 to reach $0.8814.

Yet the Australian currency remains out of favor, having shed 2.4 percent last week due to disappointing domestic data and demand for U.S. dollars and yen.

The yen was in favor again on Monday as the general mood of risk aversion led speculators to cut back on short positions, which has been a very popular trade for months now.

The Bank of Japan holds its policy meeting on Tuesday and Wednesday and is expected to maintain its massive asset-buying program.

The unexpected loss is likely to compound the problems that have dogged the bank over the past year, especially a lengthening list of lawsuits and regulatory matters, and to redouble pressure on co-chief executives Anshu Jain and Juergen Fitschen to prove their turnaround plan is on track.

The EU’s quarterly earnings season shifts up a gear this week Europe 600 companies are seen missing consensus by 0.4 percent on revenues and by 0.9 percent on earnings, according to StarMine SmartEstimates, which focuses on the predictions by the most accurate analysts.

Data from the Commodity Futures Trading Commission also showed on Friday that hedge funds and money managers raised their bullish bets in gold and silver futures and options for a third week amid a decline in stocks.

This article appeared in print on page 8 of the January 21st, 2014 edition of Hamodia.