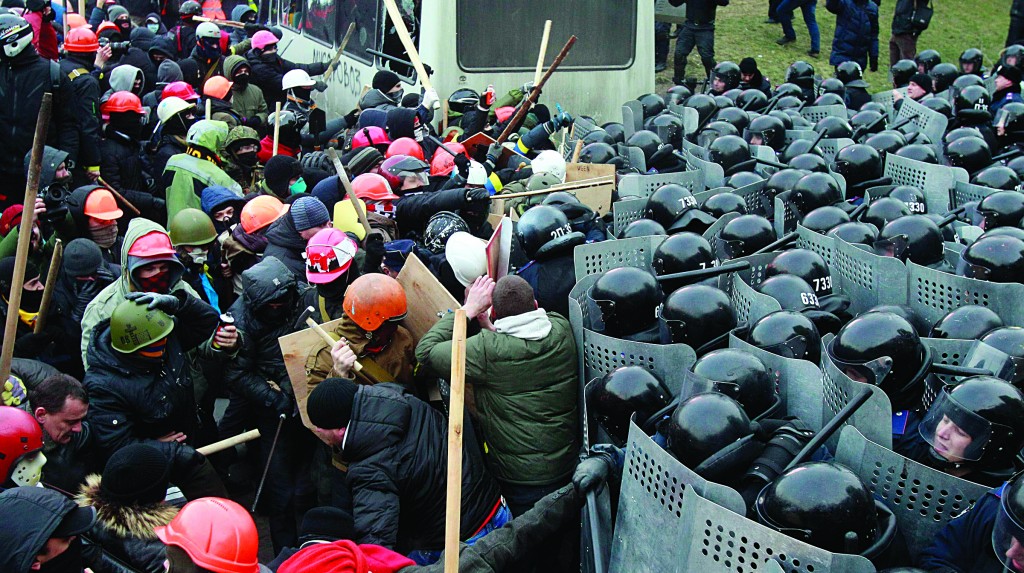 Anti-government protests in Ukraine’s capital escalated into fiery street battles with police Sunday as thousands of demonstrators hurled rocks and firebombs to set police vehicles ablaze. Dozens of officers and protesters were injured.

Police responded with stun grenades, tear gas and water cannons, but were outnumbered by the protesters. Many of the riot police held their shields over their heads to protect themselves from the projectiles thrown by demonstrators on the other side of a cordon of buses.

The violence was a sharp escalation of Ukraine’s two-month political crisis, which has brought round-the-clock protest gatherings, but had been largely peaceful.

Opposition leader Vitali Klitschko tried to persuade demonstrators to stop their unrest, but failed and was sprayed by a fire extinguisher in the process. Klitschko later traveled to President Viktor Yanukovych’s suburban residence and said the president has agreed to negotiate.

“There are only two ways for events to develop. The first one is not to negotiate,” Klitschko was quoted as saying by the Interfax news agency. “A scenario of force can be unpredictable and I don’t rule out the possibility of a civil war. … And here we are using all possibilities in order to prevent bloodshed.”

Yanukovych said later on his web site that he has tasked a working group, headed by national security council head Andriy Klyuev, to meet with opposition representatives to work out a solution to the crisis. However, it was unclear if either side was prepared for real compromise; throughout the crisis, the opposition has insisted on the government’s resignation and calling early presidential elections.

The crisis erupted in November after Yanukovych’s decision to freeze ties with the European Union and seek a huge bailout from Russia. The decision sparked protests, which increased in size and determination after police twice violently dispersed demonstrators.

But anger rose substantially after Yanukovych last week signed an array of laws severely limiting protests and banning the wearing of helmets and gas masks.

Many of Sunday’s demonstrators wore hardhats and masks in defiance of the new laws. They set several police buses on fire and some chased and beat officers.