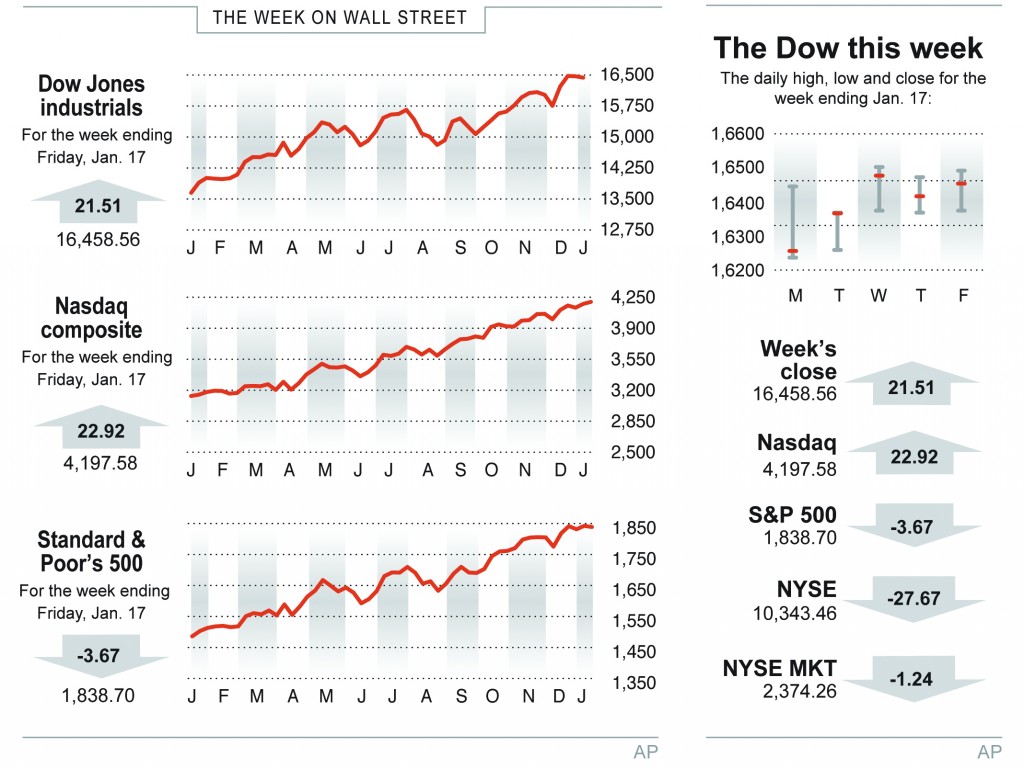 The S&P 500 index retreated from a record high close on Wednesday. It ended the week 0.5 percent lower and continued its lackluster start to January.

Still, many investors aren’t ready to give up on the stock market’s latest rally, which capped an exceptionally strong 2013 with a gain of almost 10 percent in the final three months of the year.

GE slumped 62 cents, or 2.3 percent, to $26.58 after profit margins in the company’s industrial unit fell short of its own targets.

Intel dropped 69 cents, or 2.6 percent, to $25.85 after its first-quarter revenue forecast disappointed Wall Street. Intel said revenue would reach $12.8 billion, “plus or minus” $500 million, less than analysts expected.

The earnings news on Friday wasn’t all bad.

American Express rose $3.19, or 3.6 percent, to $90.97 after the company said late Thursday that its net income more than doubled in the fourth quarter. Amex cardholders boosted their spending and borrowing during the end-of-the-year shopping season. The news also lifted Visa. The payment company’s stock climbed $10.41, or 4.7 percent, to $232.18.

The two companies are members of the Dow and together boosted the blue-chip index by 87 points. Without them, the Dow would have ended the day down.

Morgan Stanley also rose after reporting earnings that beat forecasts. The bank’s stock climbed $1.40, or 4.4 percent, to $33.40. Investors were impressed by improving profitability at the bank’s wealth- management unit, and its pledge to return more capital to shareholders in the form of dividends and stock buybacks, said Shannon Stemm, an analyst at brokerage firm Edward Jones.

About 10 percent of the companies in the S&P 500 have reported fourth-quarter results so far. Despite the disappointing earnings on Friday, profits are still forecast to climb 5.3 percent for the period to a record of $27.76 a share, according to S&P Capital IQ.

The stock market is closed on Monday for the Martin Luther King Jr. Day legal holiday.