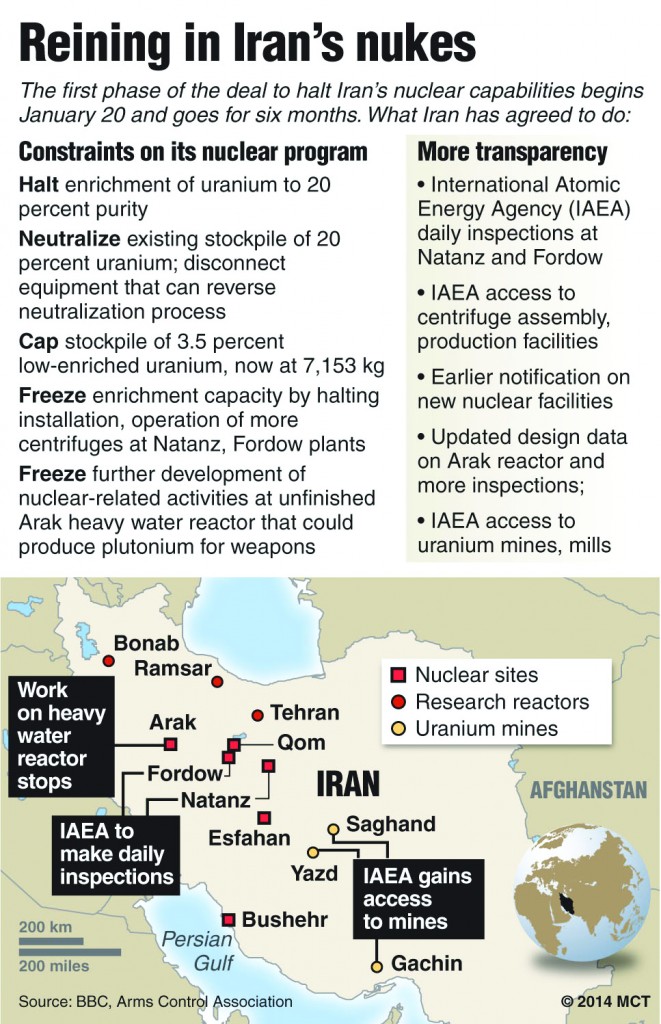 Ahead of the start of a nuclear deal between Iran and world powers, an official in the Islamic Republic called limiting uranium enrichment and diluting its stockpile the country’s “most important commitments,” state radio reported Sunday.

The comments by Behrouz Kamalvandi, a spokesman of Iran’s atomic department, show how the government of moderate President Hassan Rouhani welcomes the deal, which begins Monday. International inspectors also already have arrived in Tehran, preparing for the government to open its facilities to them.

“Implementation of mutual commitments in the framework of the Geneva deal will begin from tomorrow,” Kamalvandi said. “Under the agreement, suspension of 20-percent enrichment of uranium — and the diluting of the current stockpile of enriched uranium — are the most important commitments of our country.”

On Saturday a team of international inspectors arrived in Tehran in preparation of beginning their inspections. They will visit Fordo, where Iran enriches its 20 percent uranium, as well as its Natanz facility, which produces 5 percent enriched uranium, to ensure the country complies with the deal.

But suspicions remain high in both Tehran and Washington after decades of hostility dating back to the 1979 Islamic Revolution in Iran that ousted the U.S.-backed shah dynasty. Rouhani, Iran’s new reformist president, has reached out to the West, but must depend on support from Iran’s top decision-maker, Supreme Leader Ayatollah Ali Khamenei, for his initiatives amid criticism from hard-line factions.

Hard-liners in Iran have already called the deal a “poison chalice” and are threatening legislation to increase uranium enrichment. Meanwhile, U.S. lawmakers have threatened to pass new sanctions legislation against Iran that would take effect if Tehran violates the interim nuclear deal or lets it expire without a follow-up accord.

On Sunday, Iran’s Foreign Minister Mohammad Javad Zarif reassured the world that the deal will begin on time.

“I am hopeful that implementation of the first phase will have positive results for the country and peace and stability in the region and the world while preparing the ground for essential talks on a final solution,” Zarif wrote online.