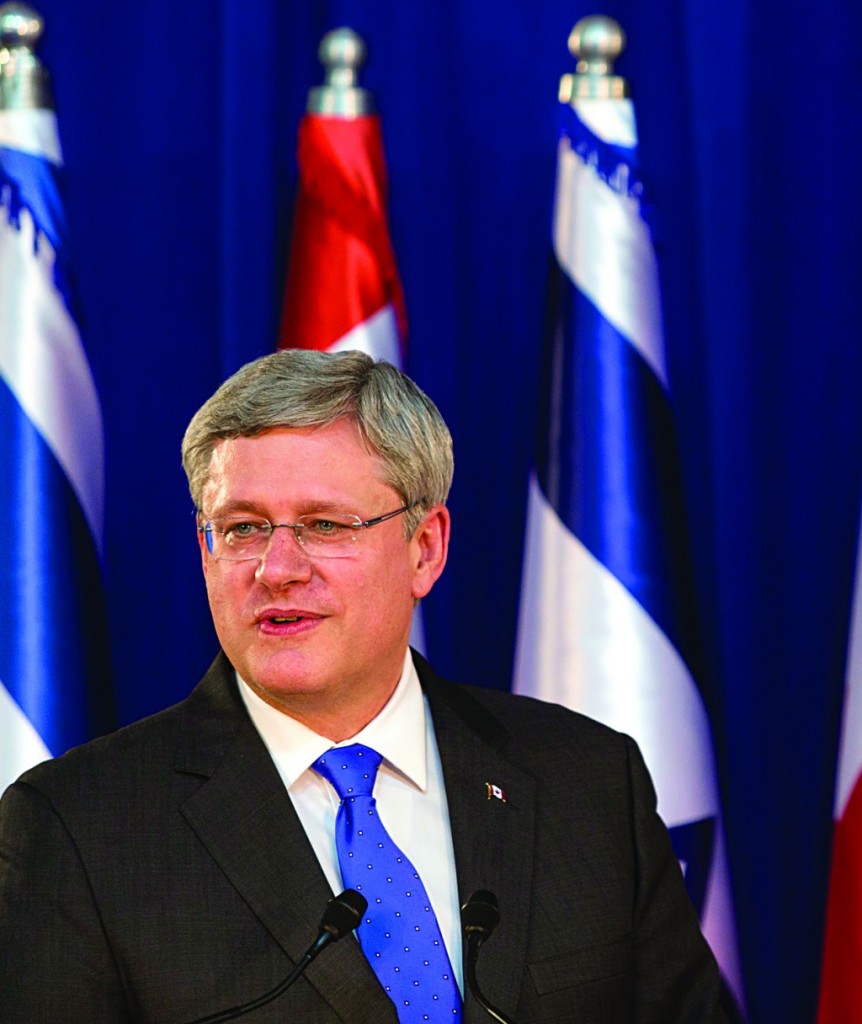 An outspoken supporter of Israel, Canadian Prime Minister Stephen Harper, arrived Sunday for his first visit in the country and the first by an incumbent Canadian premier since 2000.

Foreign Minister Avigdor Lieberman greeted Harper and his wife as they disembarked from their plane for the four-day official trip.

The Canadian premier was scheduled to meet with his Israeli counterpart Prime Minister Binyamin Netanyahu in Yerushalayim on Monday, followed by a meeting in Ramallah with Palestinian Authority President Mahmoud Abbas.

Earlier Sunday at the weekly cabinet meeting, Netanyahu hailed Harper as a personal friend and “a great friend of Israel.”

“Prime Minister Harper articulates a clear, courageous and moral stance in relation to the truth and the standards needed by the international community regarding Israel and the conflict here,” he said. “I think he has taken a moral stand worthy of admiration, and I welcome him on behalf of the Israeli government and on behalf of all the citizens of Israel.”

Harper is also scheduled on Monday to make an address to the Knesset, unprecedented for a Canadian prime minister.

Since his election in 2006, the Conservative leader has been “full-throated, unapologetic and seemingly indifferent to consequence in his support for Israel,” wrote the Jewish Telegraphic Agency.

Canada has publicly taken Israel’s side in every one of its military operations since 2006.

Harper was the first Western leader to cut aid to the Palestinian Authority following Hamas’ 2006 seizure of power in Gaza and the first to withdraw from the second U.N. World Conference Against Racism, known as Durban II, saying the event would “scapegoat the Jewish people.”

Harper’s Israel policy has been ranked by historians “as the most dramatic shift in the history of postwar Canadian foreign policy,” according to journalist Marci McDonald.

The stance is not without its risks. While Jewish voters have been abandoning their traditional allegiance to the Liberal party for Harper’s Tories, it may not be sufficient to offset the loss of support in other sectors.

“I do think his support for Israel is a principled one because he will stand to lose more non-Jewish votes than gain Jewish ones by his forthright defense of the country,” said Henry Srebrnik, who met Harper when he taught at the University of Calgary in the early 1990s and Harper represented the city in the House of Commons.

“I doubt there was any sudden epiphany when it comes to Israel, but more likely a growing, and probably somewhat religiously based, admiration for the Jewish state.”

Harper is Canada’s first evangelical prime minister in 50 years, and it is widely believed that his pro-Israel position is at least partly faith-based. However, in his public remarks about Israel the Canadian leader does not tie his policy in with religion.

Norman Spector, who served as Canada’s ambassador to Israel from 1992 to 1995 under Prime Minister Brian Mulroney, offers a different motivation:

“I think it’s simply that he is an intelligent man who has read widely and thought deeply about the issue,” Spector said.