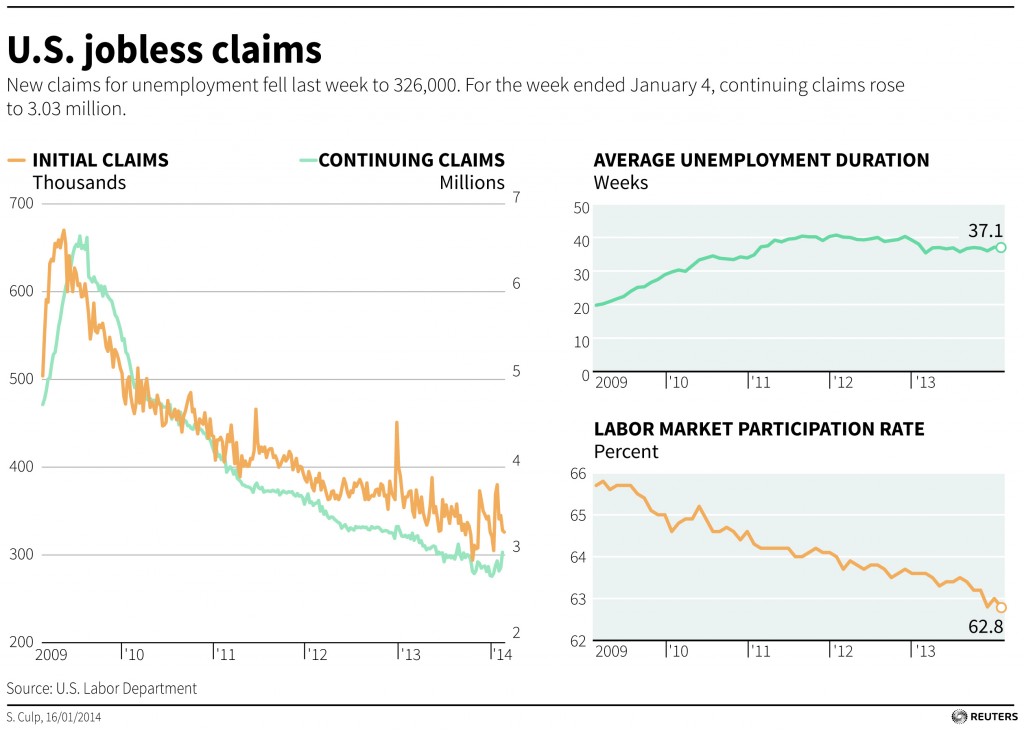 The number of Americans seeking unemployment benefits fell 2,000 last week, to a seasonally adjusted 326,000, a sign that layoffs are weighing less on the job market and economic growth.

The Labor Department said Thursday that the less volatile four-week average dropped 13,500 to 335,000.

More than 4.7 million Americans collected benefits at the end of last year. The figure has declined almost 1.2 million over the past 12 months. But that number is poised to drop by another 1.35 million in upcoming weeks. That’s because a special federal program expired last month, and is starting to affect recipients.

Applications appear to have stabilized near pre-recession levels, a positive sign for hiring, going forward.

The job market had picked up toward the end of last year, before losing some momentum in December. A mere 74,000 jobs were created last month, after the economy added an average of 213,500 new jobs in the previous four months.

Many economists blamed the slowdown in hiring on bad weather and statistical quirks, and projected stronger gains in the new year.

“Hiring indicators are almost uniformly quite strong, and we think the underlying trend in payroll growth likely has picked up, despite the fluke slowing in December,” said Ian Shepherdson, chief economist at Pantheon Macroeconomics.

The unemployment rate fell last month to 6.7 percent, from 7 percent in November. Much of that decrease came from 347,000 unemployed workers leaving the workforce. The government counts people as unemployed only if they are looking for work.

The expiration of long-term benefits could lead to further declines in the unemployment rate, perhaps as much as a quarter of a percentage point in early 2014. That’s because many of the former recipients will give up on job searches, which are required in order to receive benefits.

The program provided up to 47 extra weeks of unemployment benefits, paid for by the federal government. Those benefits offered payments averaging $256 a week to the long-term unemployed who exhausted their state benefits, which usually last for six months.

The Senate failed to advance an extension of benefits on Tuesday, after lawmakers devoted a week toward hammering out a deal.

Because the figures for all benefits recipients are released with a two-week lag, the Labor Department has yet to report the impact of the program’s end.

There are signs that recent hiring has helped to bolster the economy. Consumer confidence and retail spending have picked up in the October-December quarter. Orders to U.S. manufacturers rose in November, a sign that businesses are investing more in factory-made items, such as machinery, computers and electrical goods.

The economy remains far from healthy. Income rose at a slower pace than spending last month, so Americans are spending more but saving less. And sales of existing homes have dropped for three straight months, held back by higher prices and mortgage rates.

Still, many economists have become more optimistic about the fourth quarter. Several are projecting a strong annual growth rate of 3 percent or more.