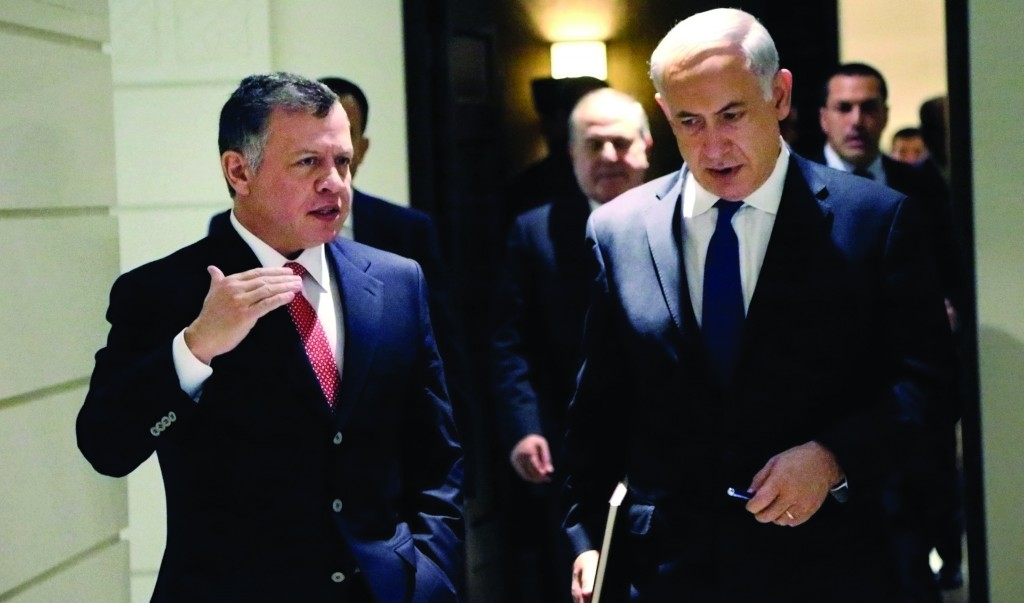 Attacks in the South escalate

Israeli Prime Minister Binyamin Netanyahu met with Jordan’s King Abdullah during a visit to Amman Thursday to discuss recent developments in the negotiations taking place between Israel and the Palestinians, officials said.

Abdullah called on Netanyahu to seize the opportunity made possible by the current U.S. diplomatic push to achieve a lasting and comprehensive settlement with the Palestinians, the Royal Palace said.

The palace said the two talked behind closed doors about the “developments in the peace process” and Israeli-Palestinian negotiations sponsored by the United States.

The visit was not previously announced. Netanyahu made at least three similar visits to Jordan last year. There was no immediate comment in Israel on Thursday’s visit.

Abdullah stressed that Palestinian-Israeli final status negotiations touch on “higher Jordanian interests.  They are a top priority for us,” he reportedly told Netanyahu.

The palace said Netanyahu briefed Abdullah on the negotiations with the Palestinians, but did not provide details.

Jordan has significant interest in the peace talks, especially in its own border with a future Palestinian state, as well as in the future of Yerushalayim and hundreds of thousands of Palestinians and their descendants residing in the kingdom since the 1967 Mideast War.

Jordanian media reported that the meeting with Netanyahu followed a series of meetings in recent weeks between King Abdullah and U.S. Secretary of State John Kerry and Palestinian Authority President Mahmoud Abbas.

Palestinian sources involved in the negotiations told Haaretz that the Jordanians are interested in an “effective force” being placed along the border with a future Palestinian state — which the Palestinians construed to mean a multinational force.

Meanwhile, Israel’s Iron Dome missile defense system intercepted five rockets fired at the city of Ashkelon from the Gaza Strip on Thursday, and the military responded with a series of air strikes on the
Hamas-controlled territory.

No group has taken responsibility for firing the rockets, which were shot down by Iron Dome’s small radar-guided missiles over Ashkelon, a coastal city of some 125,000 people about seven miles north of Gaza.

Israel says it holds the Islamist group Hamas, which has ruled the Palestinian enclave since 2007, responsible for all cross-border rocket fire.
Palestinian security officials said two Hamas camps were hit by Israel’s air strikes and that five people were wounded.