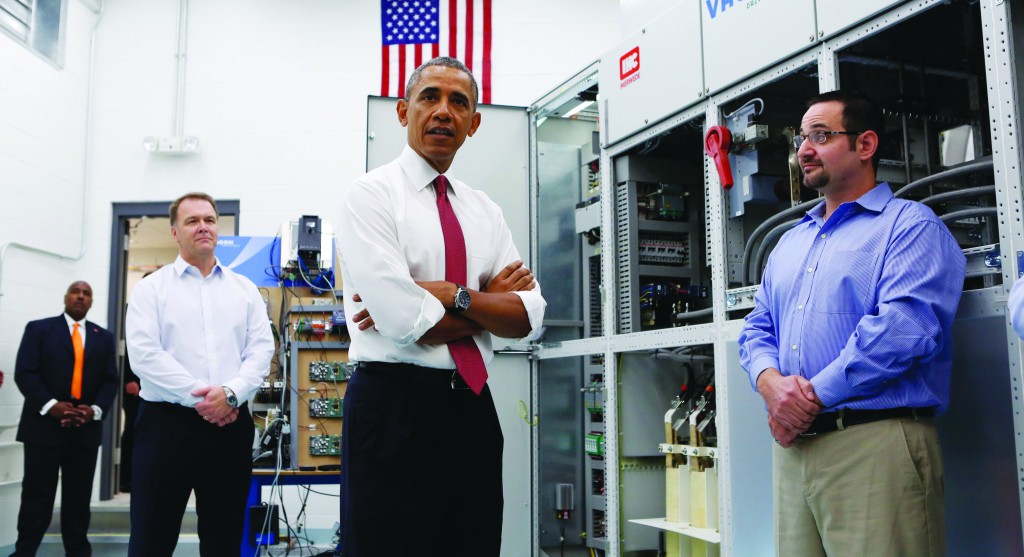 President Barack Obama on Wednesday announced a new public-private manufacturing hub in North Carolina during his visit to the state, seeking to bolster an industry that he considers essential to raising middle class incomes.

The manufacturing hub in Raleigh is a consortium of 18 businesses and six universities that will be led by North Carolina State University and will lead an institute to develop high-power electronic chips. Obama had called for three such hubs in his State of the Union speech a year ago. The other two have yet to be selected.

Eager to press economic themes in an election year after struggling with the rollout of his healthcare plan, Obama has said he would like to create a network of 45 manufacturing hubs around the country, but that would require money from Congress, which has not been as enthusiastic about the idea.

“I don’t want the next big job creating discovery, the research and technology, to be in Germany, or China or Japan; I want it to be right here in the United States of America,” Obama said on the North Carolina State University campus following a tour of Vacon, which manufactures components used in electronic engines.

While manufacturing accounts for only about 12 percent of the economy, it has been the key driver of recovery from the 2007-09 recession. Its continued show of strength is combining with improving fortunes in other sectors of the economy to set a foundation for sustained strong growth this year.

Obama’s efforts to spur stronger economic growth have been overshadowed by his inability so far to persuade Congress to approve legislation extending emergency unemployment insurance for people who have been out of work for at least six months.

The president has said the benefits would provide 1.5 million Americans a much-needed cushion and also would boost growth.

Despite pressure from the administration, Democrats and Republicans in the U.S. Senate rejected one another’s proposals on Monday. While they vowed to keep working to find middle ground, a compromise appears unlikely before next week’s Senate recess. The measure would also have to pass the Republican-led House of Representatives.