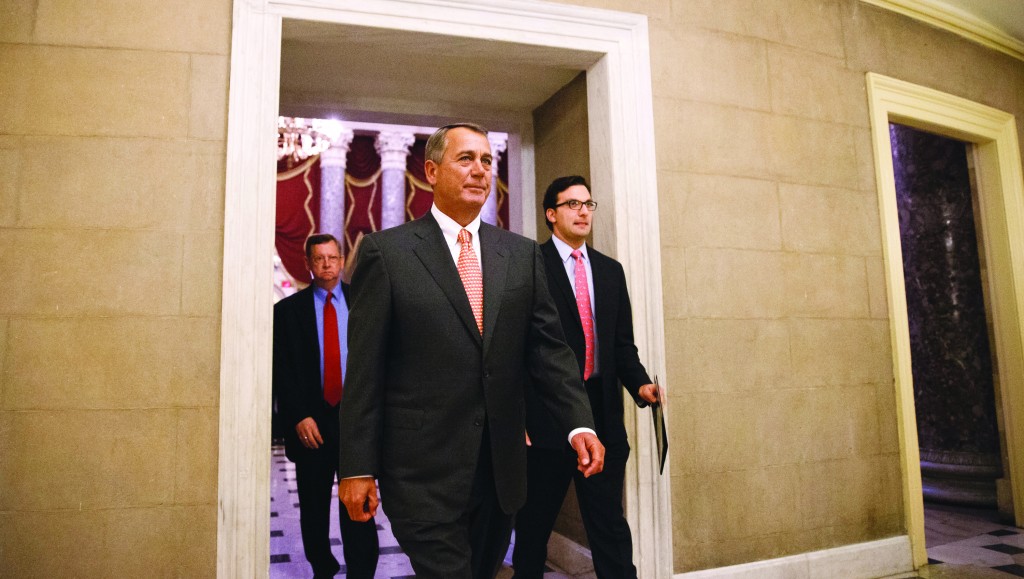 Party leaders pushed a massive $1.1 trillion spending bill for this year through the House on Wednesday, shunning the turmoil of recent budget clashes with a compromise financing everything from airports to war costs and brimming with victories and concessions for both parties.

The huge bill furnishes the fine print — 1,582 pages of it — for the bipartisan pact approved in December that set overall spending levels for the next couple of years. With that decision behind them, the measure sailed through the House with no suspense and little dissent — fueled additionally by lawmakers’ desire to avoid an election-year replay of last fall’s widely unpopular 16-day federal shutdown.

Approving the legislation “is showing the American people we actually are capable of working in a bipartisan manner,” said Rep. Tom Cole (R-Okla.). He praised the bill for holding down spending and said passage would be “the responsible thing to do. It’s the thoughtful thing to do.”

The measure was approved by a one-sided 359-67 roll call, with virtually all opposition coming from Republicans.

By its sheer size and detail, the measure had plenty for liberals and conservatives to dislike. Some Democrats said they would support it but only reluctantly, complaining that despite some increases, spending for education, health and other programs would still be too low.

The Democratic-run Senate planned to bestow final congressional approval of the legislation by the end of the week.

To keep agencies functioning while Congress votes on the legislation, the Senate by a 86-14 vote gave final congressional approval to a measure financing the government through Saturday. An earlier short-term spending measure expires after midnight Wednesday evening. 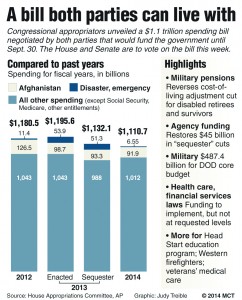 The giant bill debated Wednesday heads off an additional $20 billion in automatic cuts to the Pentagon’s budget — on top of $34 billion imposed last year — and cuts to many domestic programs as well. The reductions were being triggered by a 2011 law that forced the cuts after President Obama and Congress failed to negotiate budget savings.

Conservative groups like Club for Growth and Heritage Action were urging lawmakers to oppose it, but the White House urged its passage.

The measure provided money for Obama’s 2010 health care overhaul and his revamping of federal oversight of the nation’s financial markets — though not as much as he requested. Democrats blocked GOP-sought curbs on the Environmental Protection Agency’s power to regulate utilities’ greenhouse gas emissions.

Overall, the measure provides about $20 billion more for defense and domestic programs this year than was spent in 2013, excluding the costs of war and natural disasters. Even so, it still leaves defense and domestic spending on a downward trend since 2010, a number that troubles many Democrats.

One widely supported provision would roll back a reduction in annual cost-of-living increases for wounded military personnel who retire early or for their surviving spouses.

The Internal Revenue Service, a pariah agency for Republicans after revelations that it targeted tea party groups for tough examinations, would get $500 million less than last year. It also was receiving none of the $440 million extra Obama wanted so the agency could help enforce Obama’s health care law, another favorite GOP target.

The FBI won extra money, including almost twice as much to help it conduct background checks on firearms purchasers.