General U.S. Stocks Bounce Back a Day After Big Loss 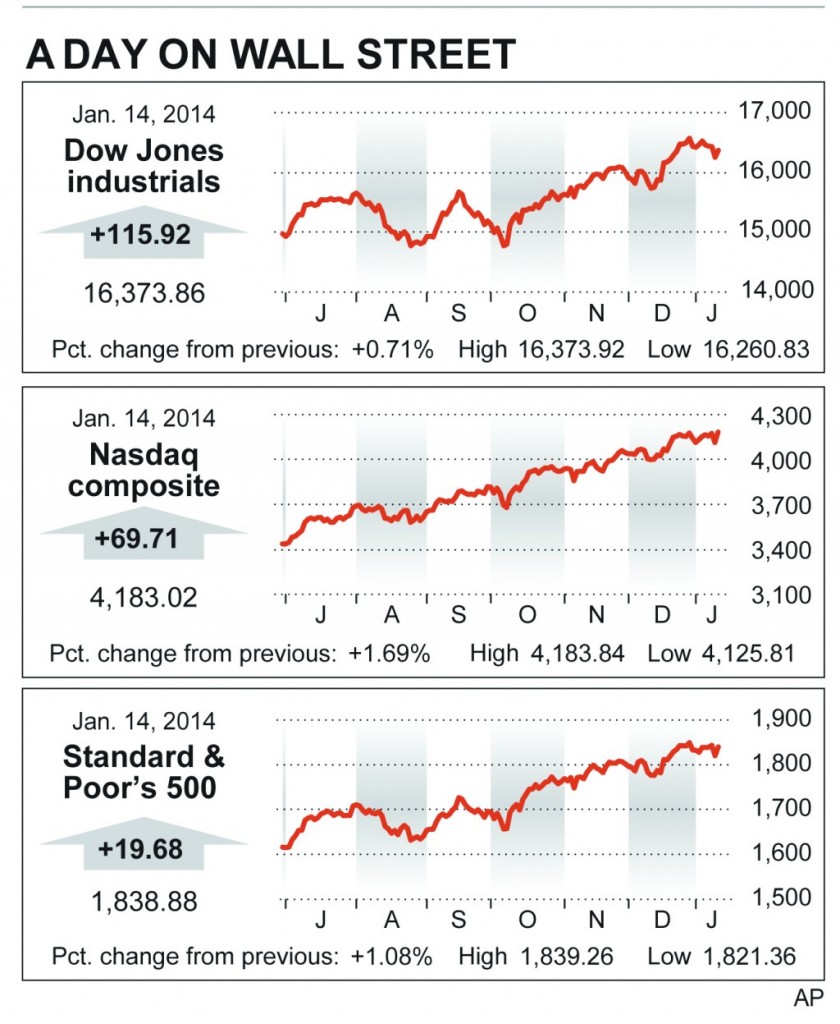 The good followed the bad for the stock market on Tuesday.

One day after logging its worst performance of the year, the stock market bounced back with its best day of 2014. The Standard & Poor’s 500 index climbed more than 1 percent and erased most of its loss from a day earlier.

A report on retail sales also boosted investor confidence. Excluding spending on autos, gas and building supplies, sales increased 0.7 percent in December, the Commerce Department reported Tuesday. That was better than the increase of 0.4 percent forecast by economists.

While the rise in December sales was modest, it helped ease investors’ concerns about the health of the economy after a surprisingly weak jobs report was published on Friday.

“This is a preview of what 2014 will be like … it’s going to be more volatile than it was last year,” said Andres Garcia-Amaya, a global market strategist at JPMorgan Funds. “The market’s bouncing back and saying the world’s not ending, things are pointing in the right direction.”

Technology companies rose 1.9 percent, the most of the 10 sectors that make up the S&P 500. The nine other sectors also finished higher.

Intel climbed $1.01, or 4 percent, to $26.51 after analysts at JPMorgan raised their rating on the chipmaker’s stock and predicted that demand for PCs will stabilize this year and that the company’s CEO will focus on improving margins and returns.

Jabil Circuit jumped $1.30, or 7.8 percent, to $17.89 after Goldman Sachs recommended buying the stock of the electronics company, forecasting that its earnings next year could be better than most analysts are expecting.

Stocks have had a sluggish start to the year after an exceptional 2013. The S&P 500 index is down 0.5 percent in January after climbing nearly 30 percent last year.

Despite the slow start, many investors remain optimistic that stocks will end this year higher as well, and that the current slump will wind up being a pause rather than a collapse.

“Valuations have certainly been pushed higher, so (stocks) are no longer cheap,” said Eric Wiegand, senior portfolio manager at U.S. Bank Wealth Management. “But we would contend that they are still fair.”

Investors were also watching results from two big banks. JPMorgan Chase, the nation’s biggest bank by assets, rose 4 cents, or 0.1 percent, to $57.74 after reporting gains in most of its divisions except for investment banking.

Wells Fargo rose 3 cents, or 0.1 percent, to $45.59 after the bank’s net income rose 11 percent, despite a sharp drop in its mortgage business.

The outlook for bank earnings should improve as the economy strengthens said, Jerry Braakman, chief investment officer at First American Trust. Banks should get a lift as long-term interest rates rise, helping to lift the margins on their lending, he said.

The yield on the 10-year note climbed to 2.87 percent from 2.83 percent on Monday as investors sold bonds. The yield was as low as 1.63 percent in early May of last year.