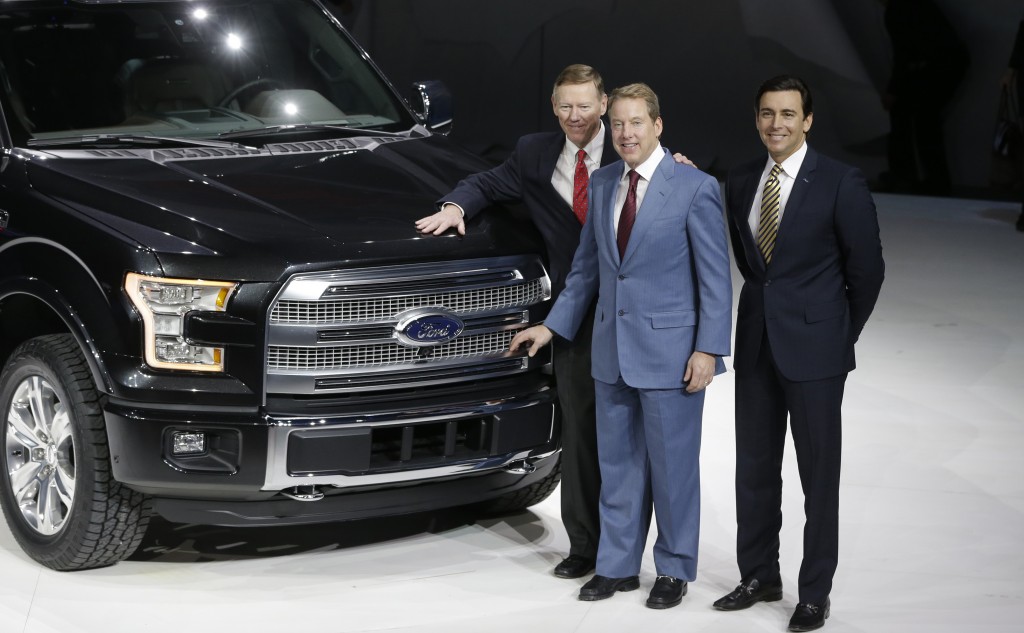 No more secrets. With Monday’s unveiling of the all-new 2015 Ford F-150 full-size pickup, to be made of aluminum, the focus switches to ensuring a smooth launch.

For decades, the body shop of truck plants has been a bastion of steel.

But aluminum represents the future – and not just for trucks.

Ford Motor Co. CEO Alan Mulally called the switch to aluminum a “manageable risk” and said it will be rolled out to other model lines.

“Over time, absolutely it will move across our product line. It will be the material of choice,” said Mulally, an aerospace engineer who worked with aluminum when he was a senior executive at Boeing Co.

Even though aluminum is more expensive than steel, the truck will be competitively priced, said Raj Nair, head of global product development.

Cost was taken out, during the design and development process, with more efficient computer-aided engineering, plans to eliminate waste in manufacturing, and ensuring new parts are less expensive, Nair said. 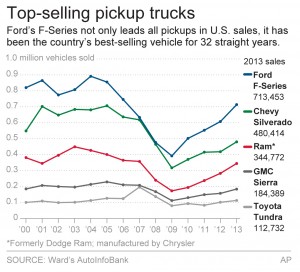 “Every time we redesign a part, we expect that part to be designed more efficiently and take cost out,” he said.

Automakers are all working to reduce vehicle weight and improve fuel economy, to meet the requirement for fleets to average 54.5 mpg by 2025.

Switching to aluminum helps the F-150 shed as much as 700 pounds and makes it possible to introduce a smaller engine: the 2.7-liter turbocharged EcoBoost V-6.

The frame is largely high-strength steel, but the cab and truck bed are heavy-gauge aluminum.

To put the pickup together, the Dearborn, Mich., and Kansas City truck plants must be reinvented, to be able to fasten aluminum body panels to a steel frame. They will need new rivets and adhesives, and new ways of moving materials around.

“It’s a big commitment,” said Dave Cole, chairman emeritus of the Center for Automotive Research. “Once you change, you can’t go back easily.”

In the body shop, “the joining is different,” said Nair, requiring a different ratio of mechanical fasteners and structural adhesives than were needed with steel.

Nair said the paint shops work with aluminum now; the hood of the current truck is made of the material.

“I’m pleased with the performance of the early vehicles and the readiness of the plants,” Nair said.

Dearborn Truck could be down for as long as a month this summer, to renovate and retool in preparation for building the new trucks in the fourth quarter. Nair said the changeover will not be longer than normal for a major launch involving multiple plants. Leadership is meeting weekly to go over issues, to ensure everything is on track.

The Kansas City plant, which also makes the Ford Transit commercial van and pulled ahead the addition of a third crew of workers in August, won’t start making new pickups until next year.

The two plants employ about 8,000 workers.

There will also be a one-time cost to convert the body shops of the two truck plants to work with aluminum instead of steel, Hinrichs said.

Ford engineers have been working on manufacturing processes for 20 years – since Ford owned Jaguar, which had aluminum bodies, said Jim deVries, who works in Ford R&D. The advanced research group has kept abreast of advanced technology and processes, which played into the decision to proceed with an aluminum truck.

Cole said he has no doubt the engineering will be top-notch.

Even with the Jaguar experience, “the scale is unprecedented,” Hinrichs said. But he said manufacturing has been deeply involved from the start, there has been a lot of testing, and the plants will be ready.

“I think it will be a huge hit,” said Bill Ford, executive chairman, who said the decision was made a few years ago “when things were not looking too rosy.”

Bill Ford is convinced once people drive the truck, they will see the aluminum-bodied model is as tough as, and better-performing than, the outgoing steel one.

“Doing it on our highest-volume vehicle allows us to be really successful,” Mulally said.

While gas prices have stabilized, and even dipped in 2013, they have been above $3 a gallon for three years, and consumers cite fuel efficiency as a main purchase consideration.

Many pickup buyers use the trucks for work, so fuel is a cost of doing business, Hinrichs said.

The average retail price of regular gasoline was $3.50 per gallon in 2013, according to the U.S. Energy Information Administration. The average weekly pump price stayed above $3 a gallon, for the third year in a row.