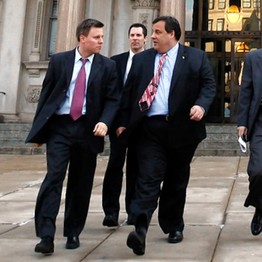 In Chris Christie’s circle of advisers, few were as close to the governor as Bill Stepien. He managed both of the New Jersey Republican’s winning campaigns for governor, helped shape Christie’s tough-guy-on-your-side image and was expected to take a top role in an eventual White House bid.

But when Christie cut him loose Wednesday evening, the governor didn’t so much as speak to him.

Christie’s decision to oust Stepien and another top adviser implicated in the burgeoning scandal over George Washington Bridge lane closures demonstrated the blunt force that Christie is willing to use to contain a crisis, even if it means exiling members of his innermost circle.

It also showed how personal politics is for the governor. Christie expressed far more anger Thursday about his aides lying to him than about how they abused their power to cause days of traffic jams.

The removal of Stepien, in particular, stunned some New Jersey political insiders, who said the strategist has provided important counsel to Christie on both politics and policy.

“Bill has been loyal to Chris Christie for many years, and I think having to push him out was difficult for Chris, both professionally and emotionally,” said former New Jersey governor Tom Kean Sr., a Republican and longtime Christie associate.

“Bill Stepien was more than just another adviser,” Kean said. “He was the key person who carried out what the governor wanted. He spoke with Christie’s authority, and anyone who has dealt with him knows that.”

Christie’s abrupt dismissal of top aides was praised Wednesday by some Republicans, who said his decisiveness stood in contrast to President Barack Obama’s handling of controversies such as the botched rollout of the federal government’s health-care website and the Internal Revenue Service’s targeting of nonprofit groups for extra scrutiny.

Critics said Christie’s moves did not address the broader problem: a vindictive culture that permeates Christie’s staff. He rejected that characterization during his nearly two-hour news conference Wednesday, saying flatly, “I am not a bully.” But he admitted that the scheme caused him to wonder, “What did I do wrong to have these folks think it was okay to lie to me?”

Christie now must remake his inner circle as he contends with his biggest test to date on the national stage, complicated by what he said were new doubts about whom he can rely upon.

“Prior to yesterday, I believed that if I looked someone in the eye who I worked with and trusted and asked them, that I would get an honest answer,” the governor said. “Maybe that was naive, but that’s what I believed.”

The governor still has a cadre of longtime advisers at his side, most of whom have known each other and worked together in GOP politics for years. They include friend and former law partner William Palatucci, political strategist Michael DuHaime, media consultant Russell Schriefer, chief of staff Kevin O’Dowd and Maria Comella, his deputy chief of staff for communications.

State Sen. Joseph Vitale, a Democrat, said Christie “can rebuild” his team, but he needs “new talent” that operates with more candor and less insularity.

Christie, during his emotional appearance Thursday, appeared most agitated when discussing his relationships with his staff.

He described aides’ behavior as “stupid,” “deceitful” and “callous.”

“I’ve had a tight-knit group of people who I trust implicitly,” Christie said. “I have no reason to believe they weren’t telling me the truth. It is heartbreaking to me that I wasn’t told the truth. I’m a very loyal guy, and I expect loyalty in return.” He used similar language when he fired his education commissioner in 2010, accusing him of lying about the state’s application for federal funds.

Christie said he fired his deputy chief of staff, Bridget Anne Kelly, 10 minutes after reading emails that show she set in motion days of traffic jams that paralyzed Fort Lee, N.J., last September. Later Wednesday, he said Stepien had been instructed not to run for state party chairman, as planned, and to end his consultancy to the Republican Governors Association, which Christie chairs. The governor said he did not speak with either of them.

The most searing loss for Christie is that of Stepien, who led his political operation together with Palatucci, who chaired his re-election bid.

Stepien had ample experience in national politics, having worked on the presidential bids of George W. Bush, John McCain and former New York mayor Rudolph Giuliani. He was expected to be a prominent player in any Christie race for the White House.

In between Christie’s campaigns, Stepien worked for the governor as his deputy chief of staff for legislative and intergovernmental affairs. When he left that post to run Christie’s 2013 re-election campaign, Kelly replaced him. But he still served as an informal Christie go-between to state Republicans and administration appointees.

As Republican state senators mingled in their chamber in Trenton on Thursday, many expressed shock at the removal of Stepien from Christie’s circle. For years, he had been a critical liaison for them as they have dealt with Christie, and they said they were unsure who — if anyone — could fill that role.

It is unclear from the documents that have emerged whether Stepien knew of the plan to close access lanes on the George Washington Bridge and snarl traffic in Fort Lee, but the emails show him corresponding with David Wildstein, a Christie appointee to the Port Authority of New York and New Jersey, about media coverage of the ensuing mess. In one email, he calls Fort Lee Mayor Mark Sokolich “an idiot.”

Christie said “the tone and behavior and attitude of callous indifference” in Stepien’s emails “made me lose my confidence in Bill’s judgment. And you cannot have someone at the top of your political operation who you do not have confidence in.”