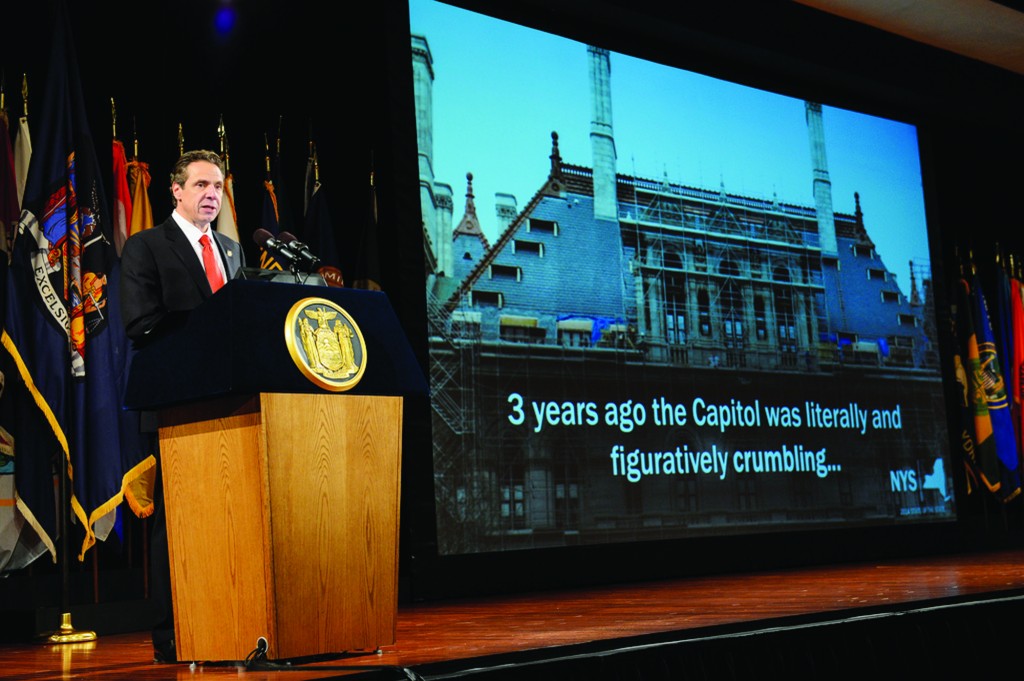 Gov. Andrew Cuomo appears to be playing to his right. And to his left.

In his State of the State address last week, the governor called for property tax freezes for New York homeowners as well as $20,000 bonuses for great teachers, no corporate income taxes for upstate manufacturers and access to medical marijuana for some patients.

This is not a case of political vertigo but part of a long-standing pattern with the governor that could help him as he seeks re-election. New York is a politically diverse state that includes not only New York City residents who just voted for an unabashedly liberal mayor but also suburban swing voters and conservative upstate precincts. The governor has something for all of them.

“He has been very good at a policy and political balancing act that takes into account that New York state is a traditionally divided place,” said Lawrence Levy, executive dean of the National Center for Suburban Studies at Hofstra University.

During his three years in office, Cuomo has stressed business friendly policies with high-profile socially liberal causes. This year’s State of the State address, the kickoff for an election-year legislative session, offered that same kind of mix.

The legislative session will play out as Cuomo deals with a new star in his party. New York City Mayor Bill de Blasio grabbed headlines and heartened progressives by coming into office last fall with a promise to pursue a sweeping liberal agenda that includes universal prekindergarten funded with a tax increase on the wealthy.

Cuomo endorsed all-day pre-K — without a plan to pay for it — along with a limited medical marijuana plan, expansion of the affordable housing program and other reforms that tend to play well with liberal Democrats.

But two of the biggest ticket items on his agenda are likely to appeal to suburban swing voters: A $2 billion tax relief proposal would include property tax rebates for homeowners in municipalities that meet certain thresholds and a proposed $2 billion bond referendum that would give pinched school districts a new stream of money that could be used to buy such items as electronic tablets and interactive white boards.

“Reflexively, suburban voters tend to view education as a top priority for their area,” said Blair Horner of the New York Public Interest Research Group. “It’s a way for the governor to be aligned with a popular topic.”

Horner noted there is precedent for a New York governor to back a bond act on the ballot in an election year. The current governor’s father, Mario Cuomo, did it in 1986 with a successful environmental bond act.

While de Blasio’s election grabbed national attention, there were other local elections in November that demonstrate the cross-currents of New York statewide politics.

Marist College pollster Lee Miringoff said Cuomo has always paid close attention to downstate suburban voters, who accounted for almost a quarter of the vote in the last gubernatorial election. But he also must deal with upstate, which accounted for 46 percent of the turnout, and New York City, with 30 percent.

Levy said Cuomo usually doesn’t reach too far in one direction, making it hard for someone to pigeonhole him as a liberal or conservative. A moderate image could help Cuomo not only in New York but also beyond if he entertains a presidential run.

Miringoff said it’s less a question of Cuomo moving to the left or the right but more of targeting different regions of the state with tailored messages.

“He certainly wants to be able to run up the score,” Miringoff said. “And in order to do that, he has to have enthusiasm at his base in New York City, he needs to make sure the suburbs are tied down for him and he then wants to show upstate that he has been pushing the economic message as hard as he could.”