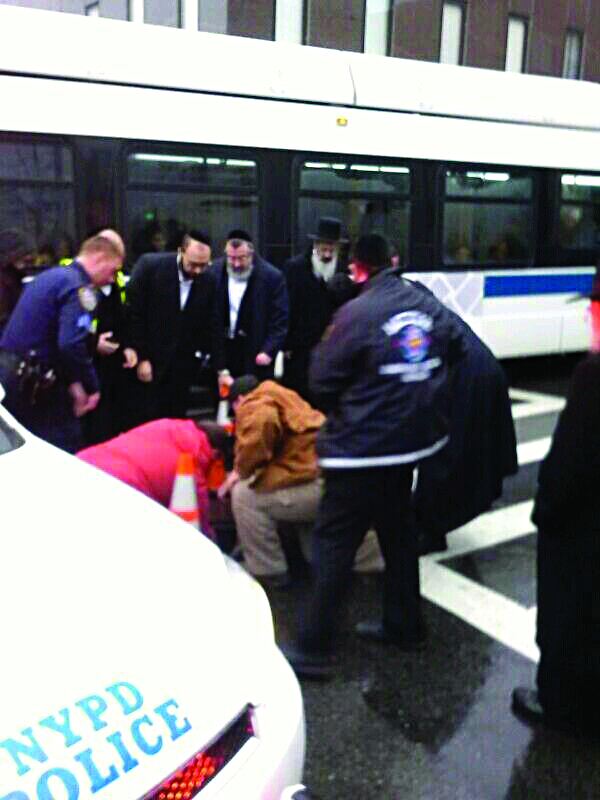 A 10-year-old boy who fell into an open manhole on Boro Park’s 13th Avenue Tuesday is uninjured after he was rescued by Hatzolah and a pair of Verizon employees working nearby.

Moshe Altman was crossing 13th Ave. and 49th Street at about 8:40 Tuesday morning. With a car blocking the intersection, he walked around the vehicle, not noticing the uncovered manhole inhis path.

Altman plunged down the hole into waist-deep water. A passing Hatzolah member rushed over, calling for backup immediately.

Hertzka Halpert, Hatzolah’s coordinator, was next to the scene. Peering into the manhole, he told Hamodia he was able to make out Altman’s “calm” face from 20 feet below ground.

Searching for a ladder to pull the boy out, the two flagged down a pair of nearby Verizon workers, and used their ladders to rescue Altman.

“Boruch Hashem he was able to come up on his own,” Halpert said. “It was a very narrow hole.”

Verizon workers Tom Prestia
and Mike Kroski told the Daily News that they were passing by the scene when they saw a crowd gathered around the manhole.

“I was just glad we were in the right place at the right time,” Prestia said.

Altman was taken to Lutheran Medical Center with a minor injury to his leg.

Officials at the city’s Department of Environmental Protection could not say why the manhole was uncovered, but said they found the cover broken and lying inside the sewer line below the street after the incident. They surmised that it had cracked and fallen into the hole. Some blamed the extreme weather pattern of the past few weeks for the steel cracking.

State Sen. Simcha Felder, a Democrat who represents the area and chairman of the Children and Families committee, said that he will get involved in the investigation how an open manhole was allowed to happen on a busy avenue.

“Those responsible for this reckless act will be held accountable,” Felder warned.

The DEP said that they will repair the manhole and investigate “the circumstances of the accident.”