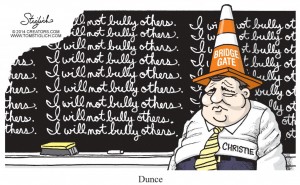 The New Jersey governor was apologetic and remorseful during a press conference in Trenton Thursday after sacking the aide he said was behind a scheme to shut down access lanes and snarl traffic in a political rival’s town. Then he answered a question about whether the bridge maneuver backed up critics’ contention that he’s a bully by saying, “I am not a bully.”

With those words the Republican broke a basic tenet of damage control by echoing one of his foes’ favorite attack lines, said Davia Temin, head of the Temin & Co. crisis management firm in New York. “The No. 1 rule is don’t repeat the allegations. I am not a bully or I am not a crook — it’s the wrong thing to do.”

Christie did most everything else right, crisis managers said, taking responsibility, expressing outrage, promising soul-searching, apologizing to the rival, firing the aide and insisting he knew nothing about what, inescapably, is being called Bridgegate.

All of that reinforced his branding as a strong, straight-talker who could be in the White House, said Mark Irion, president of Levick, a Washington-based strategic communications firm. He said the risk is that voters will also be reminded the 51-year-old has a reputation as a gruff guy who holds grudges.

“His real political [weakness] is that he may be a small-minded political bully, and not that straightforward consensus builder that he wants to be known as nationally,” Irion said. “His ultimate weathering of this is going to be determined by his ability to give absolutely no occasion for his opponents to reinforce that negative belief about him.”

Crisis management experts praised the governor for taking pages straight from their manual once incriminating emails and texts emerged to show that aides and political associates had orchestrated the closure of the lanes for four days in September.

Christie made a pilgrimage to Fort Lee after the press conference, to meet with residents and deliver an apology to Mayor Mark Sokolich. But even as the governor’s visit was publicized, the “bully” quote was flashing on screens with comparisons to other infamous one-liners.

Christie also used a phrase — “mistakes were made” — that’s been ridiculed by linguists and political analysts as a classic passive-voice avoidance idiom. Starting with President Ulysses S. Grant in 1875, those who’ve been quoted as using it while talking about scandals or controversial decisions include President Ronald Reagan and Secretary of State Henry Kissinger.

Christie explained at the press conference why he isn’t a bully but may be viewed as one: “I don’t hide my emotions from people. I am not a focus-group tested, blow-dried candidate or governor. Now, that has always made some people, as you know, uneasy. Some people like that style, some people don’t.”

As governor, he’s dressed down opponents and yelled at people on the street. Irion, the communications strategist, said Christie’s handling of the bridge affair could drown out those images. He said swiftly sending the aide packing was a good start.

With state and federal prosecutors investigating, Bridgegate will live on. Irion said Christie and his team will have to stay focused and be sure he doesn’t lose the feistiness that’s helped make him so popular.

“His brand is not to be a careful, calculating politician,” Irion said. “He can’t afford to pull up — and be so careful that he ceases to be Chris Christie.”

This article appeared in print on page 12 of the January 15th, 2014 edition of Hamodia.