General Stocks Slump the Most in Two Months on Wall Street 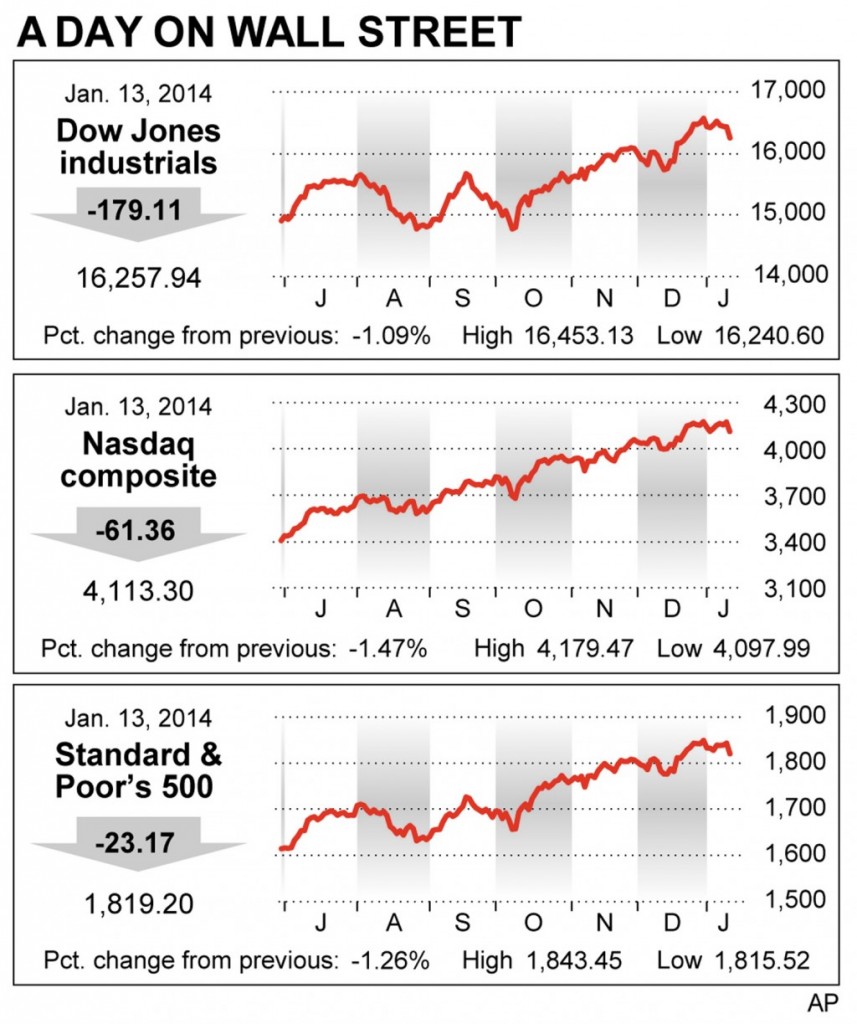 The stock market had its worst day of the year so far, extending a January slump.

Stocks dropped Monday as falling oil prices pushed down energy stocks. The prospect of the Federal Reserve further cutting back on its economic stimulus also weighed on the market.

Stocks are falling back this year after exceptional gains pushed the market to record levels in 2013. Investors’ confidence that the economy was recovering was jolted Friday by a weak employment report that showed far fewer jobs were added in December than economists had forecast.

Unlike last year, investors have so far been reluctant to buy stocks when the market has slumped. Instead they appear to be waiting for more news before committing, said Peter Cardillo, chief market economist at Rockwell Global Capital.

“At these high levels, people aren’t going to step in” until they get more evidence of earnings growth or better economic news, Cardillo said. “Until that happens, who’s going to step up to the plate?”

Energy stocks were among the biggest decliners, dropping 1.9 percent after the price of oil slumped close to its lowest in eight months. Exxon Mobil fell $1.97, or 2 percent, to $98.55.

Oil fell 92 cents, or 1 percent, to $91.80 a barrel as Libyan production continued to ramp up and the possibility of increased crude exports from Iran raised the prospects of excess supply on global markets.

Dennis Lockhart, the President of the Federal Reserve’s Atlanta branch, said Monday that he would support further cuts “over the course of this year” if the economy continued to improve. Policymakers said in December that they intended to reduce their purchases of bonds by $10 billion a month to $75 billion a month. The Fed’s stimulus was a key driver of the market’s rally last year.

For many investors, the focus this week will be on company earnings.

JPMorgan Chase, Wells Fargo and Bank of America are among the big banks that are scheduled report fourth-quarter earnings this week. Best Buy and General Electric are among the non-financial companies that will report earnings.

“The market will take its direction from how well, or how poorly, corporate earnings season is unfolding,” said Phil Orlando, chief equity market strategist at Federated Investors. “I think we’re setting up for a positive surprise.”

Analysts expect fourth-quarter earnings to rise by 5.3 percent for S&P 500 companies, according to S&P Capital IQ. That would be a slight drop from the 5.7 percent rate in the previous quarter.

Bond prices rose. The yield on the 10-year Treasury note fell to 2.83 percent from 2.85 percent on Friday.

— Lululemon Athletica fell $9.90, or 16.6 percent, to $49.70 after the company said sales have dropped off in January and its fourth-quarter results will be lower than expected.