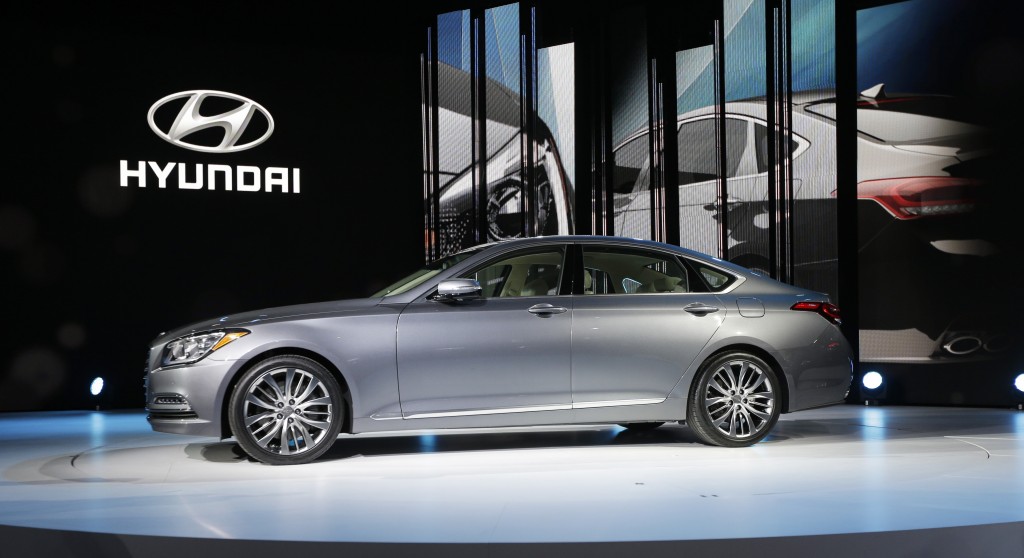 Hyundai is counting on a revamped Genesis full-size luxury car to pull buyers from market leaders Mercedes and BMW and help the Korean automaker recover from two years of lackluster U.S. sales.

The 2015 rear-drive Genesis, unveiled Monday at the North American International Auto Show in Detroit, gets an all-wheel-drive option for the first time, making Hyundai competitive for luxury buyers in snowy locations.

Google Glass computerized headsets have been released to a limited number of early adopters. The glasses project text and images, and wearers can use voice, gestures or taps on a frame touch pad to give commands. People with the glasses can start their cars and unlock or lock doors remotely, find their cars in parking lots and search for points of interest or gas stations.

Hyundai’s U.S. sales grew only 2.5 percent last year, while the overall market grew almost 8 percent. A year earlier, the market grew more than 13 percent but Hyundai sales were up only 8.9 percent. Hyundai blamed the slow growth on a lack of factory capacity to meet demand for some top-selling models.

For Genesis, demand was the problem. Genesis sales fell 4.8 percent last year, in the aging model’s final year. When the Genesis was introduced in 2009, Hyundai decided to sell luxury cars under the Hyundai brand rather than creating a new brand that would require more costly marketing. It’s sticking with that philosophy with the new model.

Here are some highlights of the 2015 version, which will hit showrooms in the spring:

INSIDE: Hyundai claims the passenger compartment is the best in its class, with 123 cubic feet of volume including the best headroom and rear shoulder room. BMW’s 5-Series, the market’s top seller, has 116 cubic feet, while the Mercedes E-Class has 113.1, according to Hyundai. The Genesis gets a simplified instrument panel with a more intuitive layout. It has storage bins for mobile electronic devices.

UNDER THE HOOD: Two updated engines: a 5-Liter V-8 with 420 horsepower and a 3.8-Liter, 311 horsepower V-6. Both are mated to an eight-speed automatic transmission for better efficiency.

GAS MILEAGE: Not released. Current V-6 version gets up to 27 mpg on highway.

CHEERS: Costs less than competitors, giving drivers a lot of technology and features for the money.

JEERS: Hyundai name doesn’t have the prestige of competitors such as BMW or Mercedes.