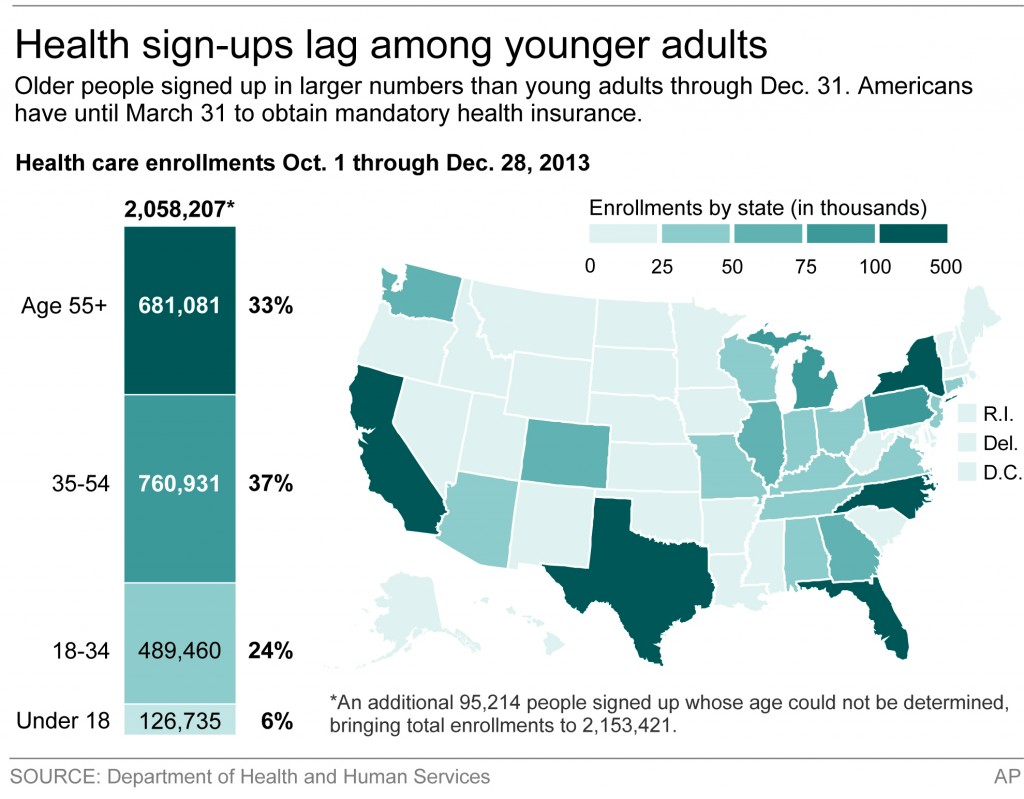 It’s an older, costlier crowd that’s signing up so far for health insurance under President Barack Obama’s law, according to government figures released Monday. Enrollments are lower for the healthy, younger Americans who will be needed to keep premiums from rising.

Young adults from 18 to 34 are only 24 percent of total enrollment, the administration said in its first signup figures broken down for age, gender and other details. With the HealthCare.gov website now working, the figures cover the more than 2 million Americans who had signed up for government-subsidized private insurance through the end of December in new federal and state markets.

Enrolling young and healthy people is important because they generally pay more into the system than they take out, subsidizing older adults. While 24 percent is not a bad start, say independent experts, it should be closer to 40 percent to help keep premiums down.

Adults ages 55-64 were the most heavily represented in the signups, accounting for 33 percent of the total. Overall, the premiums paid by people in that demographic don’t fully cover their medical expenses. Some are in the waiting room for Medicare; that coverage starts at age 65.

For example, the administration is unable to say how many of those enrolling had been previously uninsured. Some might have been among the more than 4.7 million insured whose policies were canceled because they didn’t meet the law’s standards.

“The uninsured folks for whom the law was intended don’t seem to have signed up in nearly as high numbers,” said Richard Foster, a former statistics chief for the Health and Human Services department. “There is still a huge unknown aspect to this.”

But even if the age mix remains tilted toward older adults, “it’s nothing of the sort that would trigger instability in the system,” said Larry Levitt, an insurance expert with the nonpartisan Kaiser Family Foundation. Premiums would go up next year for the overhaul, along with taxpayer costs per enrollee, but not enough to push the system into a “death spiral” in which rising premiums discourage healthy people from signing up.

Levitt and other experts expected older, sicker people to be more heavily represented in the early numbers.

Still, he said “it underscores a need to heighten outreach efforts to young people.” Adults ages 18-34 represent 40 percent of the target group for the health care law, according to a recent Kaiser study. Open enrollment ends March 31.