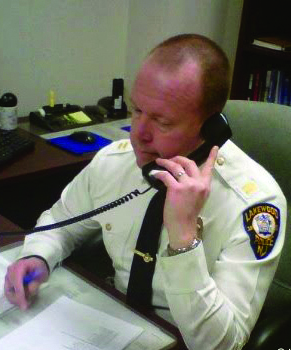 A rare freezing rain that iced on street surfaces Friday morning led to dozens of pedestrian and vehicular accidents in Lakewood, with Mayor Menashe Miller one of the victims after he slipped and fell outside his home.

The ice began to melt by early afternoon, and Lakewood Police Captain Gregory Meyer said he recorded more than 80 accidents due to the ice storm.

Cars flew off the road, and more than a dozen pedestrians slipped and fell. Both police and Hatzolah were busy all morning handling storm-related injuries.

Kimball Medical Center was placed on alert, and multiple steep roads were shut.

Isaac Zlatkin, the president of Lakewood’s Board of Education, said that they instructed school bus drivers not to travel over 5 to 10 miles per hour.

Miller, Lakewood’s mayor since two weeks ago, was outside his home on Friday morning when he slipped and fell. Unable to move, and with his cell phone flying out of reach, he lay in the snow for about 15 minutes until his wife Yocheved noticed him.

Hatzolah was quickly called, and Mayor Miller, a longtime township committeeman, was transported to the hospital.

Despite being in much pain, the mayor was in contact from his hospital bed with emergency agencies and the other committeemen to ensure the township’s residents are safe.

According to the Scoop, Miller’s injuries are expected to heal fully.