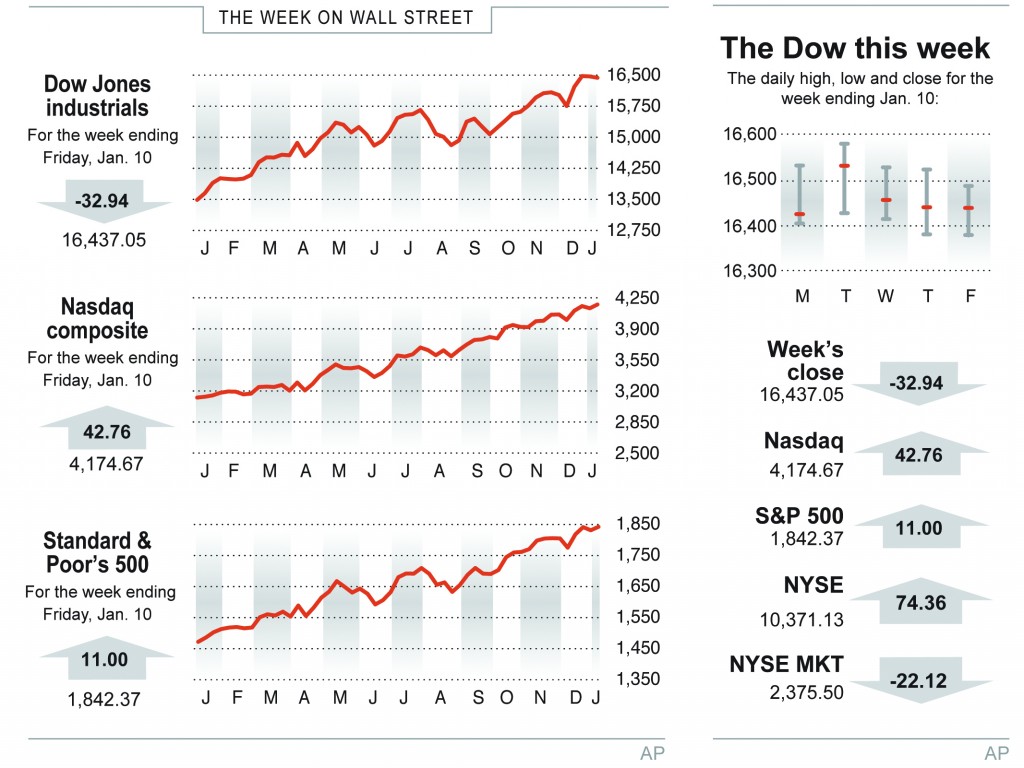 It was a fluke.

That was the conclusion investors reached about the U.S. government’s latest jobs report, which showed a sharp decline in hiring last month. Stock indexes ended mostly higher after wavering for much of the day.

The gains were minuscule, however, and there were a number of signs that investors were being cautious. Prices rose for bonds and gold, traditional “go-to” assets for nervous investors. Utilities and other kinds of low-risk, high-dividend stocks also rose as investors sought safe places to park money.

“We need to see more evidence before concluding that all the other (economic) indicators are wrong and the jobs data is correct,” said Kate Warne, a market strategist with Edward Jones.

The Dow Jones Industrial average fell 7.71 points, or less than 0.1 percent, to 16,437.05. If not for a slump in Chevron, which reported a decline in oil and gas production late Thursday, the index would have risen slightly.

The Labor Department said that only 74,000 jobs were added to payrolls in December, the least in three years and far fewer than economists expected. The unemployment rate fell, but mostly because many people stopped looking for work, the government said.

The December jobs survey stands in contrast to weeks of reports consistent with a steadily strengthening economy. U.S. companies are selling record levels of goods overseas; Americans are buying more big items like cars and appliances and layoffs have dwindled. As recently as Wednesday, the payroll processor ADP said private businesses created 238,000 jobs in December.

If the recent U.S. economic picture were a jigsaw puzzle, the jobs report is the piece that didn’t fit. 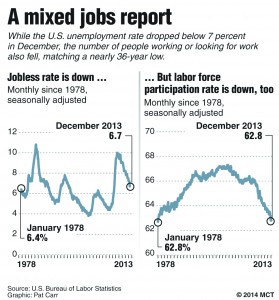 “The investor base was completely shocked with how especially weak the numbers were,” said Tom di Galoma, who heads up bond trading at ED&F Man Capital.

Market strategists blamed the bad jobs data on everything from the unseasonably cold weather in December to the fact that the Thanksgiving legal holiday came later than usual. Few believed the economic recovery is slowing down.

Cautious investors took the data as a reason to retreat into safer investments.

Bond prices rose, sending yields lower. The yield on the 10-year Treasury note fell to 2.87 percent from 2.97 percent the day before.

Utility stocks were among the biggest gainers as investors looked to pull back on risk. The Dow Jones utility average, a basket of 15 utility companies, rose 1.3 percent. Consolidated Edison, Pacific Gas & Electric, and Edison International were all up roughly 1 percent or more.

With Wall Street treating the December jobs data as an aberration, the place investors will look next for guidance will be corporate earnings. Investors spent the second half of 2013 bidding up stock price to historic highs in hopes that the U.S. economic recovery would translate into higher profits.

On average, Wall Street is looking for corporate earnings to be around 6 percent higher than they were last year.

Very few companies have reported their latest quarterly earnings, but so far the results have not been promising.

The pace of earnings releases will pick up next week. JPMorgan Chase, American Express, GE and Goldman Sachs are among the companies that will report results. That will give the market a broader array of data to look at before concluding that the U.S. economic recovery may be slowing.