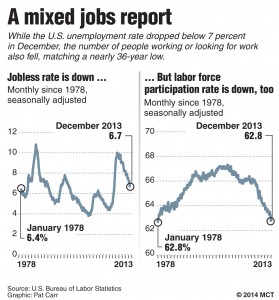 A surprisingly poor jobs report Friday put a damper on the increasingly rosy projections for economic growth and cast doubt on whether the Federal Reserve will continue to pull back on its stimulus efforts later this month.

After a string of uplifting news about the economy and labor market, the government said U.S. employers added a meager 74,000 jobs last month, the smallest in almost three years and a sharp retreat from the 241,000 new jobs in November.

Bad weather may have been a factor, and jobs data are often revised a month later. But the size and breadth of the jobs slowdown were hard to dismiss. The December number was only about a third of what analysts expected and well below the 200,000 average of the prior three months.

“There’s been sort of a buzz about an acceleration in the labor market,” said Heidi Shierholz, an economist at the Economic Policy Institute in Washington. “This suggests we’re not seeing that.”

Friday’s report from the Labor Department was all the more baffling in that the unemployment rate fell to a new five-year low of 6.7 percent, from 7 percent in November.

Many economists were less troubled by the latest job numbers, given some apparent oddities in the data.

Construction employment, for example, fell by a large 16,000, “possibly reflecting unusually cold weather in parts of the country,” said Erica L. Groshen, commissioner of the Bureau of Labor Statistics, which produces the report. Construction jobs had expanded in the prior six months and averaged monthly growth of 10,000 for all of last year.

Weather also may have depressed payrolls at manufacturing and leisure businesses, analysts said, and the employment report showed inexplicably large losses in the film industry and at accounting firms.

All in all, many economists were reluctant to abandon their forecasts for stronger economic and job growth this year based on one month’s employment report, especially when it was so difficult to square with all the recent economic data showing growing momentum in the recovery.

In recent weeks, the numbers have indicated that consumers are spending more, export demand is rising amid a better global outlook and home-building is growing. New jobless claims and surveys of small businesses also pointed to a strong finish to 2013.

“We did a double-take at the payrolls headline this morning just to make sure there wasn’t a digit missing in front of the 74k,” wrote James Marple, a senior economist at TD Bank.

Despite the disappointing jobs report, some analysts said the Fed, which last month decided to make its first cut to its bond-buying program to stimulate the economic recovery, is likely to press ahead with its wind-down plans when it meets Jan. 28-29.

Others aren’t so sure.

“Ultimately, the uncertainty surrounding the jobs market raises the possibility that the Fed might forego another taper move at its next meeting later this month,” he said.

“It’s hard to build a house or build an office building when it’s 15 to 20 below,” Labor Secretary Thomas E. Perez said in a media interview. “Weather is undeniably a factor.”

“It might have impacted things, but I’m not sure it was a big impact,” said Hall, a research fellow at George Mason University’s Mercatus Center. “One bad month is not good news, but let’s just hope this is a blip.”

With signs that apartment construction is surging, building industry experts agreed that the December data for their industry were probably a fluke.

“I don’t take it as a sign of slowing activity,” said Ken Simonson, chief economist for the Associated General Contractors of America.

Among the few bright spots in the report was the retail industry, which added a robust 55,300 jobs to close out the year. The temporary-help industry, often seen as a harbinger of broader hiring, also added more than 40,000 workers to its payrolls.