Iraq Holding Off on an Offensive Against al-Qaida 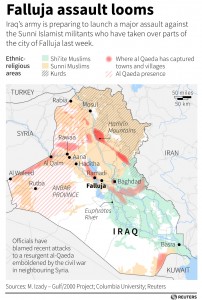 Iraq’s government is holding off on waging an all-out offensive to retake two key cities from al-Qaida because of fears that civilian casualties could incite Sunni anger and push moderate tribal leaders to side with the extremists, analysts and military officials said Thursday.

More violence flared in Baghdad, where a suicide bomber killed 21 people at an army recruiting center in a clear effort to demoralize the military.

Al-Qaida-linked fighters overran parts of the cities of Fallujah and Ramadi in Sunni-dominated Anbar province last week, seizing control of police stations and military posts, freeing prisoners and setting up their own checkpoints.

The United States, whose troops fought bloody battles in the cities, has ruled out sending its troops back in, but has been delivering missiles to bolster Iraqi forces. It is expediting shipments of more American-made missiles and 10 surveillance drones, but those may not arrive for weeks.

The U.S. invaded Iraq in 2003 and withdrew in 2011. Both countries tried but failed to negotiate plans to keep several thousand U.S. forces in Iraq to maintain security.

Vice President Biden spoke to Prime Minister Nouri al-Maliki twice this week, voicing support for his government’s efforts to regain control of the cities and urging him to continue talks with local and national leaders.

Iran, too, is watching the unrest with alarm, since it shares U.S. concerns about al-Qaida-linked terrorists taking firmer root in its neighbor. It has offered military equipment and advisers should Baghdad ask.

Iraqi troops have clashed with the fighters mainly on the outskirts of the cities. But they have held off launching major offensives to retake either.

One senior intelligence official said the reason for the delay was to avoid civilian casualties.

“We have enough soldiers, but we are waiting for the American drones and missiles. These weapons will have a big role in the coming battle,” the official said.

Baghdad-based political analyst Hadi Jalo agreed that concerns over civilian safety might explain why the government has not launched a major offensive.

“The killing of civilian victims will drive more people looking for revenge … to join al-Qaida. If women and children are killed in any … action against Fallujah, al-Maliki will lose the support of moderate Sunnis,” he said.

Al-Qaida terrorists, emboldened by their gains in neighboring Syria, have sought to position themselves as the champions of Iraq’s Sunnis against the Shiite-led government, even though major Sunni tribes in Anbar and elsewhere oppose the group’s ideology and are, in some cases, fighting against it.

This article appeared in print on page 2 of the January 10th, 2014 edition of Hamodia.