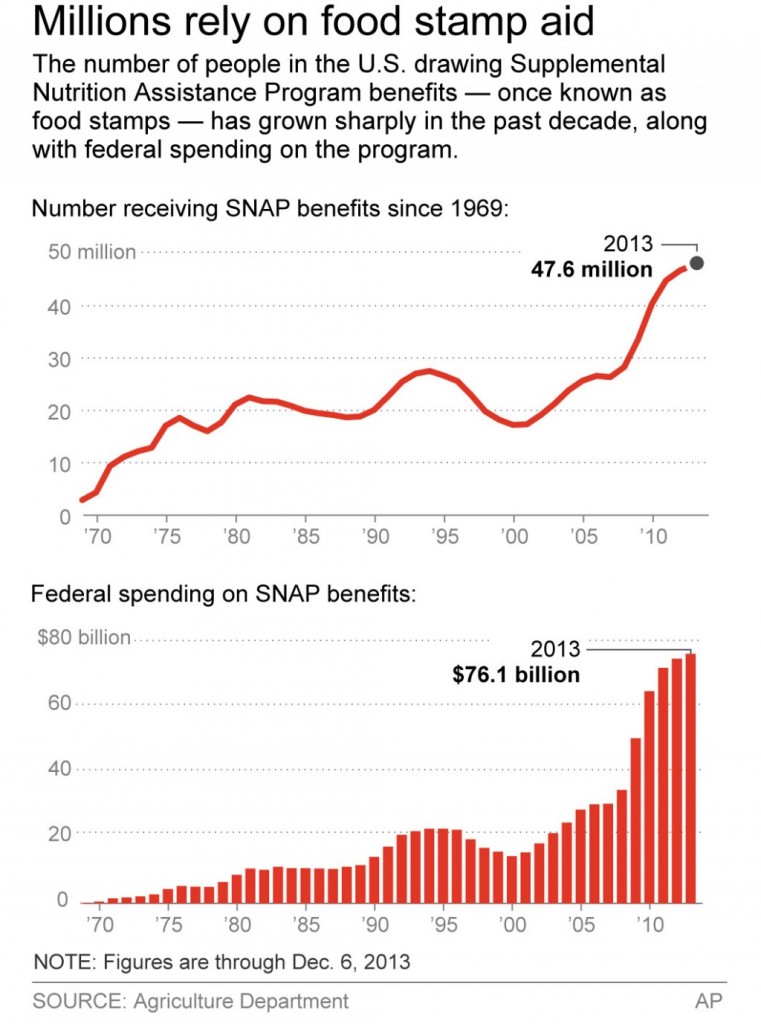 Doctors are warning that if Congress cuts food stamps, the federal government could be socked with bigger health bills. Maybe not immediately, they say, but over time if the poor wind up in doctors’ offices or hospitals as a result.

Among the health risks of hunger are spiked rates of diabetes and developmental problems for young children down the road.

The doctors’ lobbying effort comes as Congress is working on a compromise farm bill that’s certain to include food stamp cuts in yet another partisan battle.

Food stamps, known as SNAP,  the Supplemental Nutrition Assistance Program, feed 1 in 7 Americans and cost almost $80 billion a year, twice what it cost five years ago. Conservatives say the program spiraled out of control as the economy struggled and the costs are not sustainable. They say the neediest people will not go hungry.

The health and financial risks of hunger have not played a major role in the debate. But the medical community says cutting food aid could backfire through higher Medicaid and Medicare costs.

“If you’re interested in saving health care costs, the dumbest thing you can do is cut nutrition,” said Dr. Deborah Frank of Boston Medical Center, who founded the Children’s HealthWatch pediatric research institute.

A study published this week helps illustrate that link. Food banks report longer lines at the end of the month as families exhaust their grocery budgets, and California researchers found that more poor people with a dangerous diabetes complication are hospitalized then, too. The researchers analyzed eight years of California hospital records to find cases of hypoglycemia, when blood sugar plummets, and link them to patients’ ZIP codes.

Among patients from low-income neighborhoods, hospitalizations were 27 percent higher in the last week of the month compared with the first, when most states send out government checks and food stamps, said lead researcher Dr. Hilary Seligman of the University of California, San Francisco. But hospitalizations didn’t increase among diabetics from higher-income areas, she reported Tuesday in the journal Health Affairs.

Last year, research from the Robert Wood Johnson Foundation and The Pew Charitable Trusts estimated that a cut of $2 billion a year in food stamps could trigger an increase of $15 billion in medical costs for diabetes over the next decade.

Other research shows children from food-insecure families are 30 percent more likely to have been hospitalized for a range of illnesses. But after a temporary boost in benefits from the 2009 economic stimulus, children whose families used food stamps were significantly more likely to be well than kids in low-income families that didn’t participate, Children’s HealthWatch found. About half of food stamp recipients are children, and 10 percent are elderly.

That would be on top of cuts in November, when that 2009 temporary benefit expired. According to the Agriculture Department, a family of four receiving food stamps is now getting $36 less a month. The average household benefit is around $270.