General Stocks Slip as a Sluggish Start to 2014 Drags On 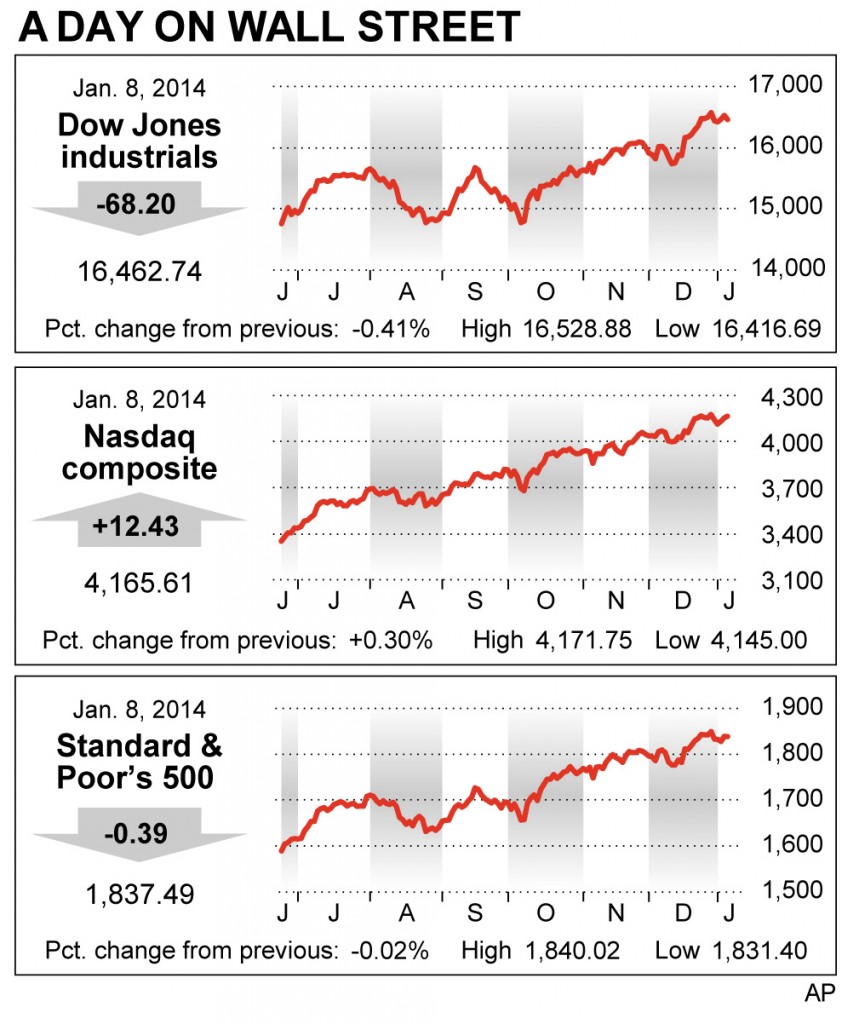 The stock market stumbled Wednesday as investors waited for the government’s jobs report later this week and the beginning of quarterly earnings releases from corporate America.

Traders put aside a positive report that showed private employers created more jobs in December than economists had expected. The market had a muted reaction to the minutes from the Federal Reserve’s mid-December policy meeting.

Wednesday’s declines extend what has been a muddled start to 2014. Both the Dow Jones industrial average and the Standard & Poor’s 500 index are down a little less than 1 percent after five days of trading.

The tough start should be taken in context of last year’s exceptional performance, when the S&P 500 surged almost 30 percent.

After bidding up companies’ stock prices to record levels last year, investors are ready to see if their bets are going to pay off. Big, publicly traded U.S. companies will start reporting their quarterly financial results Thursday.

“The question is whether this strengthening economy is translating into stronger corporate earnings,” said Russ Koesterich, global chief investment strategist at the investment firm BlackRock.

Dow member and oil giant Chevron will report after the closing bell Thursday, as well as former Dow member and aluminum company Alcoa. Next week investors will have results from Goldman Sachs, JPMorgan Chase, General Electric and American Express.

“Earnings will determine what’s next for the stock market,” said Lawrence Creatura, a portfolio manager with Federated Investors.

Another theme on investors’ agendas is jobs.

A private survey released Wednesday showed U.S. businesses added the most jobs in a year in December, powered by a big gain in construction work. Payroll processor ADP said companies added 238,000 jobs in December, better than the 200,000 economists predicted.

S&P Capital IQ’s Alec Young said he expects the stock market will “churn” at these levels into next week, once investors have earnings and Friday’s jobs report to analyze.

Ford rose 16 cents, or 1 percent, to $15.54 after CEO Alan Mulally said he would not leave to run Microsoft. Mulally was considered a top candidate for the position, having led the turnaround for Ford turning the financial crisis.

Forest Labs jumped $10.54, or 18 percent, to $69.30 after the company said it would buy Aptalis, which specializes in treatments for gastrointestinal problems and cystic fibrosis, for $2.9 billion in cash.

Macy’s jumped in after-hours trading after the company said late Wednesday that it would lay off 2,500 workers as it restructures its business. The stock rose $3.21, or 6 percent, to $55.05.