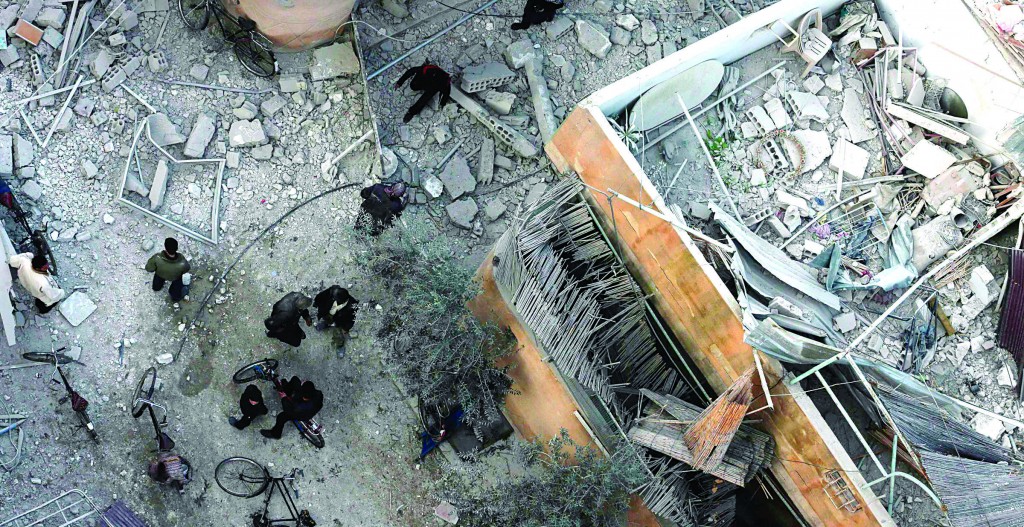 The first batch of the most dangerous chemicals in Syria’s arsenal was loaded onto a Danish ship and taken out of the country Tuesday under tight security, an important milestone in the international operation to rid President Bashar Assad of the weapons by midyear.

The operation at Syria’s port of Latakia took place against the backdrop of a widening civil war and escalating infighting between a chaotic mix of Syrian rebel brigades and an al-Qaida linked terror group, the Islamic State of Iraq and the Levant.

With the rebel-on-rebel fighting now in its fifth day, the shadowy leader of another faction affiliated with al-Qaida pleaded with his comrades to stop the spreading clashes, warning they threatened to upend gains made against Syrian government forces.

The chemicals were supposed to have been removed from Syria by Dec. 31, but poor security, bad weather and other factors meant the deadline was missed by a week.

The raw materials — precursor chemicals for poison gas — were moved to the government-held port of Latakia from two sites in Syria and loaded onto the Danish cargo ship, which then set sail, said Sigrid Kaag, the Dutch diplomat coordinating the joint mission by the U.N. and Organization for Prohibition of Chemical Weapons.

“The vessel has now left the port of Latakia for international waters,” Kaag said in a statement. “It will remain at sea awaiting the arrival of additional priority chemical materials at the port.”

Security for the highly toxic cargo is being provided by warships from Russia, China, Denmark and Norway. U.N. Secretary-General Ban Ki-moon welcomed the progress.

The chemicals removed Tuesday will eventually be transferred to a U.S. ship, the Cape Ray, which has been fitted with special machinery. Once aboard the vessel, the materials will be placed in a titanium reactor that uses heated water and other chemicals to render the weapons inert.

The confirmed use of chemical weapons in the Damascus suburb of Ghouta on Aug. 21 killed hundreds of people, according to the U.S. government. The U.S. and Russia — a staunch ally of Syria — later reached agreement to eliminate the Assad regime’s chemical weapons by mid-2014.

The infighting between rebel groups is concentrated in parts of northern Syria, spreading Monday to the northeastern city of Raqqa, a bastion of the al-Qaida-linked Islamic State of Iraq and the Levant.

The group has alienated its opposition for its extremely brutal tactics. Moderate forces among the opposition accuse the group of tarnishing the Syrian revolution and serving Assad’s interests.

“The [Assad] regime will revive itself after it was close to disappearing,” said Abu Mohammed al-Golani, the head of Jabhat al-Nusra. His comments in a rare audio recording posted on a terrorist website underscored the seriousness of the clashes.

The rising influence of al-Qaida extremists among rebel ranks has dampened U.S. support for the rebellion, and rebel infighting is further undermining the fight against Assad. The war, now in its third year, has killed more than 130,000 people, according to the Syrian Observatory for Human Rights.

The U.N.’s human rights office said it has stopped updating the death toll from the civil war, confirming it can no longer verify the sources of information that led to its last count of at least 100,000 in July 2013.