National Arctic Air Eases Its Grip on Much of the U.S.
National 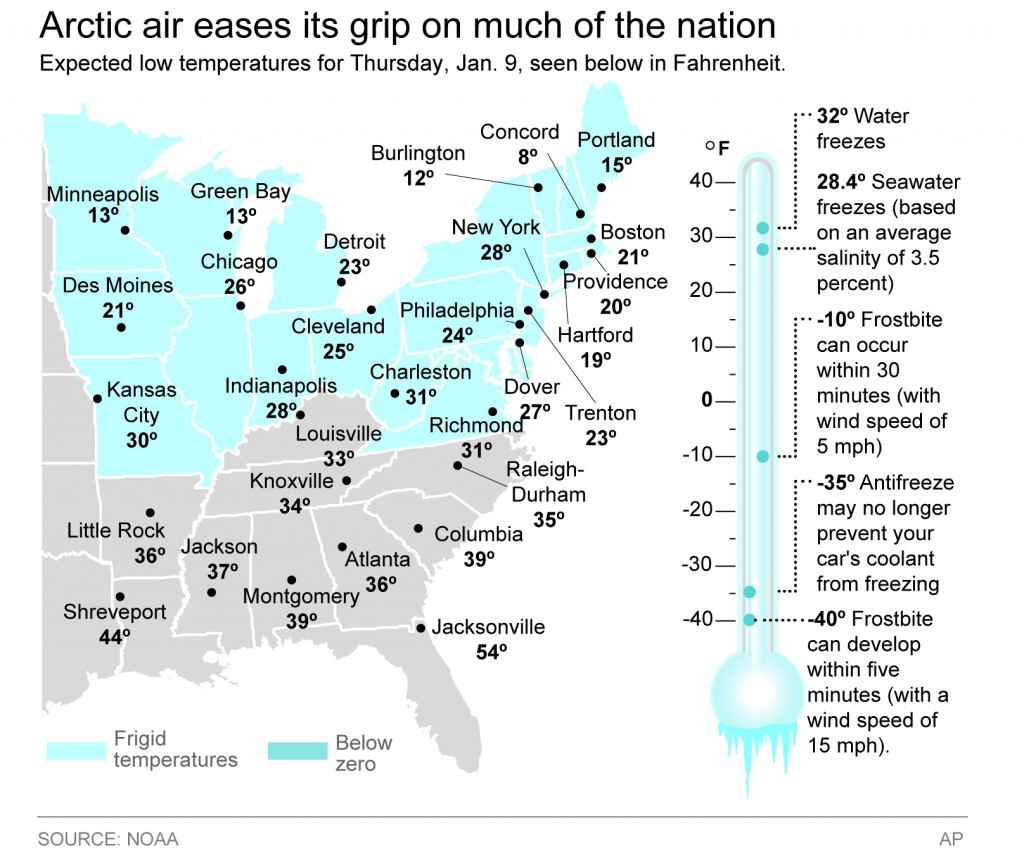 An arctic blast eased its grip on much of the U.S. on Wednesday, with winds calming and the weather warming slightly a day after temperature records — some more than a century-old — shattered up and down the Eastern Seaboard.

In Atlanta, where a record low of 6 degrees hit early Tuesday, fountains froze over, a 200-foot Ferris wheel shut down and Southerners had to dig out winter coats, hats and gloves they almost never have to use. It shouldn’t take too long to thaw out, though.

In the Midwest and East, where brutal polar air has lingered over the past few days, temperatures climbed but were still expected to be below freezing.

In Indianapolis, Timolyn Johnson-Fitzgerald returned to her home after spending the night in a shelter with her three children because they lost power to their apartment. The water lines were working, but much of the food she bought in preparation for the storm was ruined from a combination of thawing and then freezing during the outage.

“All my eggs were cracked, the cheese and milk was frozen. And the ice cream had melted and then refroze. It’s crazy, but we’re just glad to be back home,” she said.

The cold turned deadly for some: Authorities reported at least 21 cold-related deaths across the country since Sunday, including seven in Illinois and six in Indiana. At least five people died after collapsing while shoveling snow, while several victims were identified as homeless people who either refused shelter or didn’t make it to a warm haven soon enough.

In a phenomenon that forecasters said is actually not all that unusual, all 50 states saw freezing temperatures at some point Tuesday. That included Hawaii, where it was 18 degrees atop Mauna Kea, a dormant volcano.

Natural gas demand in the U.S. set a record Tuesday, eclipsing the mark set a day earlier, according to Jack Weixel, director of energy analysis at Bentek Energy.