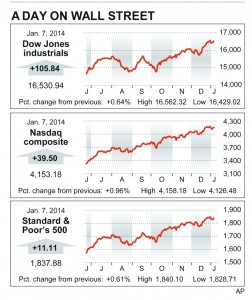 Stocks rallied Tuesday, ending a slump that had ushered in the New Year.

The Standard and Poor’s 500 index climbed the most in three weeks, led by gains for health-care stocks. UnitedHealth Group, the nation’s largest health insurer, and Johnson & Johnson both climbed on recommendations for brokerage firms.

After three straight declines, the S&P 500 would have matched its worst opening of a year since 1978 had it closed lower for a fourth day. The stock market’s slow start to 2014 contrasts with last year’s exceptional performance, when the S&P 500 climbed to record levels after surging almost 30 percent.

“To me the trend still looks up, even though we’ve been chopping around,” said Bill Stone, chief investment strategist at PNC Wealth Management Group. The economy “seems to be in the mode that you would expect corporate earnings to continue to grow.”

UnitedHealth group gained $2.27, or 3.1 percent, to $76.51 after analysts at Deutsche Bank said they expected the nation’s largest health insurance company to charge customers more in premiums this year.

Johnson & Johnson climbed $1.96, or 2.1 percent, to $94.29 after analysts at RBC Capital raised their outlook on the stock to “outperform,” in part due to optimism on sales of the diabetes drug Invokana.

Investors were also encouraged by the easy passage in a Senate vote late Monday of Janet Yellen’s nomination to take the helm at the Federal Reserve. The vote puts an economist in the post who has backed the Fed’s recent efforts to stimulate the economy with low interest rates and huge bond purchases.

The confirmation is a reminder that the Fed’s policies of stimulating the economy will likely continue, said Kristina Hooper, U.S. Investment Strategist at Allianz Global Investors.

Investors will get more insight into the Fed’s thinking when minutes from the Federal Open Market Committee are released on Wednesday. The Fed announced after its last meeting that it would begin winding down its monthly $85 billion bond-buying program. That stimulus was a major support for last year’s rally in stocks.

Despite Tuesday’s gains, stocks have started the year off on uncertain footing. Materials companies have declined 1.6 percent so far this year, led by Cliffs Natural Resources. The mining company, which was the second-biggest loser in the S&P 500 last year as commodities prices slumped, is extending its losses.

In government bond trading, the yield on the 10-year Treasury note fell to 2.94 percent from 2.96 percent Monday.

The most important piece of economic news to be released this week will come on Friday when the Labor Department releases its jobs report for December. The report will influence the Fed’s decision on how quickly it will reduces its bond purchases in the coming months.

Among the biggest losers on Tuesday was Netflix.

Mattel also dropped. The toy maker fell 58 cents, or 1.2 percent, to $46.04, after analysts at Goldman Sachs advised their clients to sell the stock. Goldman is predicting that the company’s earnings will struggle to match expectations as sales stagnate.

This article appeared in print on page 46 of the January 8th, 2014 edition of Hamodia.